45 thoughts we had watching The Happening

I'm honestly surprised nobody's tried to remake The Happening. Man vs. nature is a staple conflict in horror; it's basically money on the table for someone to explore our current anxieties and fears about climate change.

Maybe its reputation precedes it too much. The Happening is the middle child of a trilogy of flops that derailed M. Night Shyamalan's career for several years, along with siblings Lady in the Water and The Last Airbender. Of the three, I know the most about The Last Airbender (which is … shall we say … full of white actors for some reason?), but some of the memes from The Happening reached even my shores — "why you eying my lemon drink," anyone?

But does The Happening truly deserve that reputation? Couldn't it possibly rise above its own historical context and into the ranks of the thoughtful, mid-century thrillers Shyamalan had in mind while making it?

1. Are y'all ready for a Bush-era horror movie about climate change?

2. We open on two friends hanging out and reading a true crime novel together, which I assume is the origin story for My Favorite Murder.

3. Mark Wahlberg is playing a science teacher, which you can tell by the tasteful sweater vest. 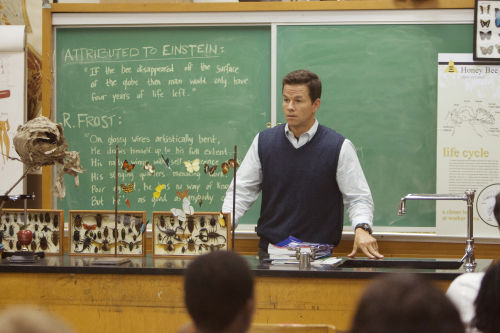 4. In the span of this class, he's negged a 15-year-old into caring about science and claimed that all science is just a theory, so I'm starting to think he really isn't a science teacher.

5. Honestly, I am shocked I was able to clock Alan Ruck from just the back of his head.

6. The most horrifying thing about The Happening is watching adults function without smartphones.

7. So Zooey Deschanel (WHO IS IN THIS MOVIE?!)'s Alma is deeeeeefinitely cheating on Mark Wahlberg's Elliot.

8. Oh, also, because I know you're wondering, Mark Wahlberg is nine years older than Zooey Deschanel you're welcome .

9. While packing to flee the city, Mark Wahlberg does what any of us would do and equips a massive sapphire ring.

10. Alma and Elliot are having a whisper fight in Union Station in front of John Leguizamo's Julian and his daughter, Jess, which is weird because this is usually a fight that couples have directly next to me on Amtrak.

11. Every time we cut to trees nefariously rustling in the wind, I just want to scream "THE GIVING TREE STRIKES BACK!"

12. You're not safe out in the country, Elliot, you're surrounded by the enemy!

13. Elliot tells Jess that nothing is going to happen to them in a small town, which further convinces me he's not a science teacher since he's clearly never seen a horror movie in his life.

14. Update: The massive sapphire ring is, in fact, a mood ring. Its presence in this film is still inexplicable.

15. So … Amtrak lost service but everybody in this diner is getting full, delicious service on their Motorola Razrs in the year of our Lord 2008?

16. The electricity goes out and all of these survivors immediately, as one, decide that they need to move exactly 90 miles "out of range." I'm impressed by their organizational skills.

17. Oh, this dude runs a plant nursery? HE'S A MOLE FOR THE TREES ELLIOT GET OUT OF THE THERE

18. Julian needs to go to Princeton to find his wife and leaves Jess with his friends. Jess is a sensitive child, so of course he screams "DON'T TAKE MY DAUGHTER'S HAND UNLESS YOU MEAN IT" at Alma.

19. I will say this: The Happening turned five people talking about hot dogs in a greenhouse into the HEIGHT of tension for about three minutes.

20. ... it would take about six hours to drive from Filbert, Pennsylvania, to Princeton, New Jersey you're welcome.

21. I know coming across the tree cutters' dead bodies is meant to be terrifying, but the idea of the trees just snapping and going full Whomping Willow is kind of hilarious.

22. Look, movie, I don't care how many shots of the wind whistling ominously through the fields you have, you'll just never be Demon Wind!

23. So, at this point, people have realized it's an airborne toxin, so why do they think re-routing around obviously affected areas will work? That's not how wind works!

24. "The terrorists could be watching the roads!" Oh, no, there's a tree right behind you!

25. So Alma fesses up to having a romantic dessert with a coworker to Elliot … only when they might actually die. WOW. Were you just going to keep that secret forever otherwise? Good thing the evil wind saves her from having to explain herself any further!

26. Mark Wahlberg muttering "all right, be scientific, douchebag" to himself is the greatest line in this movie. 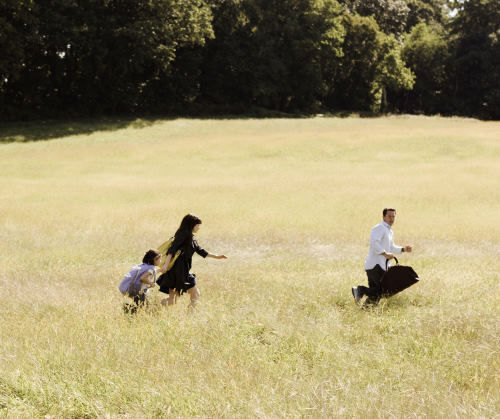 28. So turns out the trees are only angry at groups of more than five, like anytime you walk into a restaurant.

29. I cannot BELIEVE this movie turned an office plant into a jump scare.

30. Red wine with sushi? What kind of maniac dressed this model house?

31. One of the two teens Elliot, Alma, and Jess have picked up immediately starts interrogating Elliot on his reproductive decisions. DUDE! BOUNDARIES!

32. Oh, a creepy boarded house in the middle of nowhere? With a swing nailed into a tree that's definitely not seething in rage? Yeah, let's definitely stop here and have a fun moment on the swing.

33. The homeowners murder the teens so hard one of them gets six bullet wounds from a single shot.

34. The two smartest characters in the entire movie are these nice old lesbians wearing gas masks in their home that we cut to randomly. Live long and prosper, ladies!

35. The creepy old woman who takes in our protagonists for the night is like, "I DON'T CARE ABOUT THE WORLD AND IT DON'T CARE ABOUT ME. ANYWAY, THE GUEST ROOM IS ALL SET UP," which, dang, whose mom is this?

36. So the creepy old woman keeps a creepy doll in a creepy bedroom and we're not going to get into it at all?

37. Oh, no, she's so creepy the trees are going to murder her even though she doesn't have a plus one!

38. Close the door, Mark Wahlberg! NOT THE SCREEN DOOR THE DOOR DOOR!

39. So the trees have decided that gratuity is added to EVERY check, so Mark Wahlberg is trapped in the house, while Jess and Alma are in the springhouse in the backyard, connected only by a talking tunnel.

40. Oh, so the reason he has the mood ring is that he bought it for Alma, which is why … he wears it and it's sized to him and … I'm lost again.

41. Okay, so Elliot and Alma decide that if they're gonna die, they're gonna die together, which is cool I guess, except that there is a supremely traumatized eight-year-old with them that their dead best friend trusted them with who is also going to die if they do that! Who are you, Jaime and Cersei?

42. Oh, suddenly the tree attack is over? Y'all got lucky. LUCKY!

43. Uhhh, I'm sorry, Alma, did you just sneak a photo of Jess' dead parents into her backpack for her first day of school after this traumatizing event? I'm impressed that this children's room came together so quickly, but your parenting skills are WEAK.

44. ... so of course, she's pregnant. THE TREES HAVE TRULY BLESSED THEIR UNION.

45. And now, for your enjoyment, this entire film again, but now in French! Voilà, Phemenones!