Cartoon Network introduced an entire generation of children, including myself, to the Hanna-Barbera cinematic universe. One of my favorite cartoons was Josie and the Pussycats. Imagine my surprise when I later started reading Archie comics and discovered they were all connected, including Sabrina, the Teenage Witch.

I loved Scooby-Doo, mainly because of the music, so it made all the sense in the world that I'd love Josie and the Pussycats. I remember seeing the trailer for the live-action movie and the amount of joy it brought me. The movie has always had a special place in my heart because it was, in my opinion, a great comic book movie. I recently rewatched it and still have the same appreciation for how self-aware it is and how much it reminds me of John Carpenter's They Live but in its unique way.

In this DuJouriffic Deja View, we look back at the delightful Josie and the Pussycats (2001).

3. Seth Green, as a heartthrob, is an absolute no. He's another one who stayed in a teen movie.

4. The branding in this movie is top tier.

5. The boy band was that formulaic. DuJour could have been a thing.

6. Of course there are subliminal messages in music.

9. Babyface produced about half the songs on the soundtrack, which is probably the reason it's so good. It went gold.

11. Honk if you love pussy... cats. Try explaining that car accident to your insurance company.

12. The red wig Rachael Leigh Cook is wearing is the same wig they put on Famke Janssen in X2. Therefore, the X-Men and the Archie universes are connected. I don't make the rules. I also have no idea if either were wigs, but for now, we'll pretend they were.

13. Everyone has started somewhere, even playing at the local bowling alley.

14. This movie is such an early-aughts time capsule.

15. What did Geo Trackers do to earn the title of teen movie bully/mean girl vehicle?

16. I'll always be sad there wasn't a cameo by anyone from Archie's crew.

17. I realize just how much I watched this movie. I even know the little song Allen sings while Josie works on his car by heart. 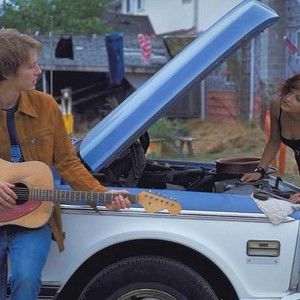 18. I truly loved the hell out of the cartoon and the comics. This movie was my Avengers.

19. Melody was super airy in the animation as well as the comics.

20. Alexandra and Alex are both on point too. 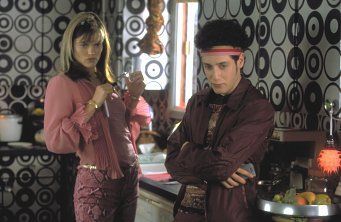 23. So much product placement. 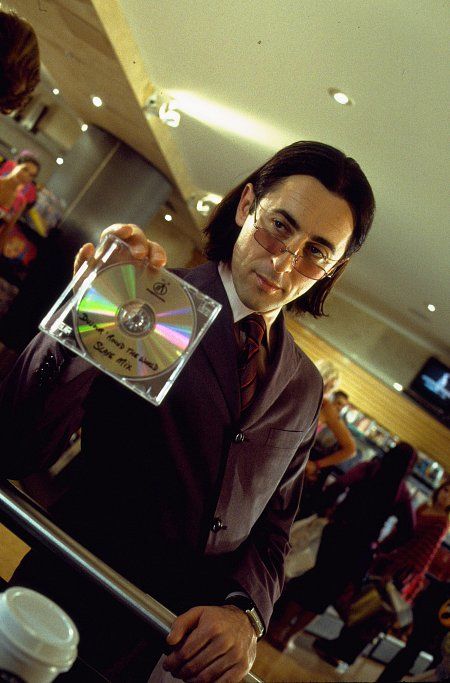 25. Everyone is wearing pink.

28. I did not understand the "Smells Like Teen Spirit" reference until much later. I wasn't versed in Kurt Cobain until my junior year of high school. That's when I got into my "I'm angsty" bag.

29. Sure. Signing a record contract at Starbucks makes a lot of sense.

33. This world is a dystopian one, and I think it exists in the same universe as Blade Runner.

36. OK. Time to put on those tin foil hats. It's conspiracy theory time.

37. That outfit really is a Buffy meets Chicken Run.

38. The tour of this evil record company is just like the Jurassic Park tour.

41. It is not weird at all that they would record with their tails on.

44. Come on for this TLC Fanmail cover homage. 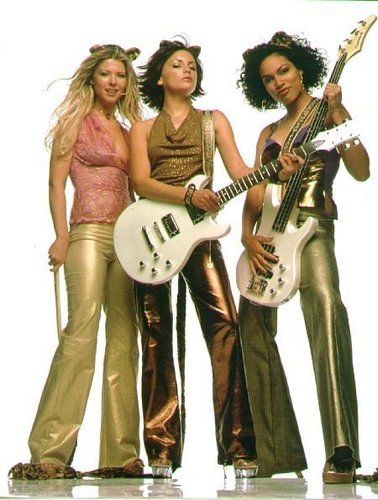 46. Josie and the Pussycats went #1 in one week. Legendaric!

47. OK, the guy talking in Peppa Pig is getting a little racist. How did Val not get an invite?

49. Babyface said I'll write these songs for the album, but I'm also going to make a cameo in this movie. Iconic.

50. Josie is tapping into the Phoenix Force. Look how feathered this hair is.

51. Fiona might be the perfect comic book villain. Thanos could never.

52. I had to do my Googles to make sure it wasn't Elizabeth Banks playing Fiona. For a long time, I would mix up Parker Posey, Elizabeth Banks, and Amy Smart.

53. Parker Posey should have been a Marvel villain, honestly. There is still time.

54. Low-rise jeans and stiletto pumps in the aquarium.

55. The fight scene between Tara and Carson works so well because they were dating at the time.

56. This Revlon carpeting in Josie's hotel room looks so lush.

57. They didn't even try with this fake TRL.

61. Live streaming a concert on dial-up internet sounds like hell.

62. Again, Fiona makes for a great villain. She was going to kill Melody and Valerie in a 2001 Mustang convertible. The elegance.

63. Fiona's master plan was to hype herself up. A VILLAIN!!!

64. This real Wyatt and Fiona reveal is a lot to take in.

66. Josie and the Pussycats said don't trust the government and gave us a performance. We have to stan.

It's a fan thing
Join SYFY Insider to get access to exclusive videos and interviews, breaking news, sweepstakes, and more!
Sign Up for Free
All Posts About
Comics
Fangrrls
Movies
Josie and the Pussycats
deja view
Related Stories