67 thoughts we had while watching Real Genius

Every time I discover there is an '80s classic I've never actually watched from start to finish, I get excited because I get to experience some '80s goodness for the first time. No matter what, depending on the genre, I know I'm going to get a great montage and new inspiration for future playlists to make.

Science fiction comedies like Weird Science, WarGames, and Back to the Future I've seen numerous times, so I was surprised to learn that Real Genius somehow escaped my radar for so long. The more I thought about it, a heavily airbrushed Val Kilmer on the VHS/DVD cover art was always pretty unsettling and could possibly be why I never picked the movie up on a Friday night when my parents would take us to Family Video or Blockbuster.

So, on Real Genius' 35th birthday, I'm finally working past it to learn just how much of a genius Chris Knight was in this movie the great Roger Ebert gave three and a half stars to. 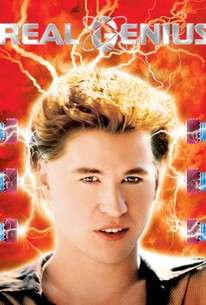 1. So many patents on display in the opening credits. That's A Choice for the opening.
2. LOL! Wait! Wait! Wait! Did that man just get zapped from space?!
3. I sincerely thought the opening was like some concept footage for an upcoming sci-fi movie, but it turns out it's a business meeting—a shady one at that.
4. Peacetime weapons. Sure, that makes perfect sense.
5. I shouldn't be surprised at how cutthroat a weapons company meeting would be, but here I am surprised.
6. The one Black guy who finally decided to draw the line at laser beaming humans from existence from space is going to get killed, and I wish he'd just quietly found another job.
7. Am I watching a Twilight Zone movie?
8. Professor Jerry Hathaway must be significant in senior assisted living homes because someone's grandma is ready to risk it all.
9. Googles "Pacific Tech."
10. Now Mitch's dad might have made some points when he asked about scholarship signing bonuses. 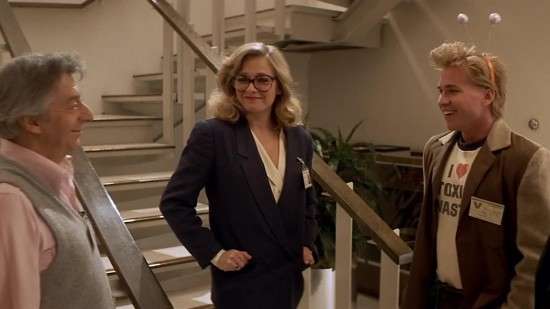 15. Awww, there can only be three, maybe four kinds of cishet white male geniuses, the two in this movie: either stuffy and clean-cut or unorganized, sometimes charming jackasses.

16. Am I watching the origin story of Rick from Rick and Morty?
17. Using grant money for professional upgrades. Academic scamming.
18. All this exploitive labor.
19. The floor is going to be so sticky with all those bubbles on the floor. Trust me, I know from experience, unfortunately.

20. This dorm building is stressing me the hell out.
21. A lot of the geniuses so far in this movie seem like they might be on the Autism spectrum, which makes me wonder about how many genius tropes exist because people were unaware and just thought they were quirky?
22. I know I better find out what's going on with this closet situation before the movie ends. 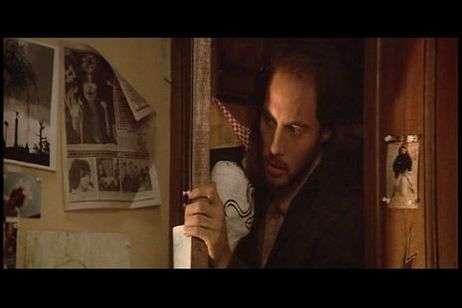 24. So much space in those loose in the booty boxers.

27. Running with loose papers is just never ever a good idea and yet ...
28. This is a LONG montage. We're getting the full song. I love it.
29. OHHHH! So it's a scientific Narnia behind the closet.
30. I don't want to judge, but I'm trying to figure out why anyone would hate popcorn.
31. Eating or drinking things out of a beaker really stressed me out. I had a coworker once who would do that a lot.

35. Professor Jerry shut their party right on down but still got clocked for his little tv show makeup.
36. Poor Mitch. He was just trying to loosen the first button of his collared shirt.

40. You know, a bully with braces would say, "You will rue the day."
41. Academia loves threatening some blackball.
42. Another bop played during a montage and is perfect for a revenge montage.
43. Chaz Jantal!
44. What is Sherry doing? Mitch is only 15.
45. PENITENTIARY!
46. Mitch and Jordan make it, but how old is Jordan because again, Mitch is only 15?
47. Why would you leave a project you've been working on for so long with the guy whose car you put in his dorm?!

48. The way Kent ruined Chris' project makes me feel like the whole nerd gang needs to meet him outside.
49. "ICE IS NICE!"
50. Ummm, how old is Sherry again, and how old is Prof. Jerry?! Also, why is he sleeping with his boss's daughter?
51. Chris did it!! He made science! 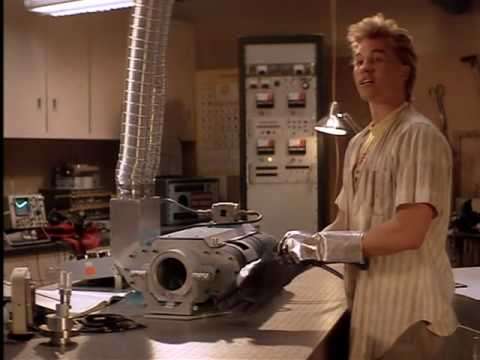 52. Okay, what if someone would have been in the path of that beam, though?! It burned through the courtyard and all the way into town.
53. Lazlo came through with the accurate conspiracy theory. Spending time in scientific Narnia paid off.

54. I'm still not over everyone deciding to put a speaker in Kent's braces. 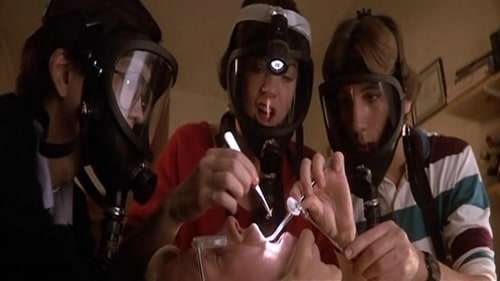 55. I love how they're using Kent's car in their scheme, but how did he get the car out of his dorm room?

56. By the way, this mustache looks really convincing.

57. The '80s made it so easy to sneak your way into a high-security place.
58. It's amusing that they have Kent believing he's talking to Jesus. 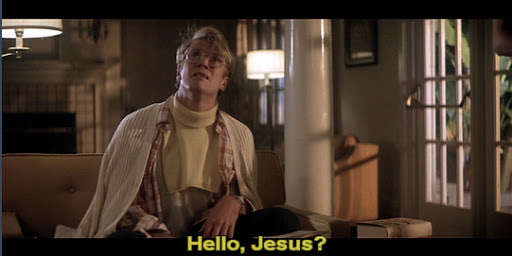 59. The testing of this weapon is about to go horribly wrong, and I can't wait.
60. I'm not too fond of Kent, but they could have done a better job preventing him from going into Prof. Jeffery's home.

61. Billions of dollars to pop popcorn.
62. Does insurance cover anything if your home is destroyed by too much popcorn popped by a laser? 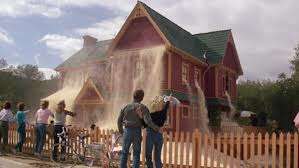 63. Sherry is marrying Lazlo?! Sherry has had a whole separate movie on her own.
64. A survival place in Wyoming. Sounds legit.
65. Okay. So, who is cleaning this popcorn up?!
66. What a great song to close things out. Come through Tears for Fears!
67. I completely get why Roger Ebert gave this movie three and a half stars out of four.