79 thoughts we had while watching Yes, Madam!

There is always a movie that inspires you to try potentially dangerous things with your siblings, cousins, or friends. For me and my siblings, it was the Hong Kong action movie Yes, Madam! The underrated '80s gem starred none other than Michelle Yeoh and the inspiration behind Mortal Kombat's Sonya Blade, Cynthia Rothrock.

I was already a huge action movie fan thanks to the one and only Jackie Chan; however, the moment I saw Michelle and Cynthia high-kicking guys into another dimension, I felt compelled to tap into my inner stunt devil. Let's just say it's a miracle neither my brothers nor I ended up in the emergency room.

I recently rewatched Yes, Madam!, because, in the age of corona, trips down memory lane are at an all-time high in my home.

1. I want to get this first thought out the way, and that's the fact Michelle Yeoh has been fine my entire life.

4. Madam is so great even the criminals agree. Can you say ionic?

5. One of the biggest reasons I and I'm sure a ton of other people love rewatching '80s movies is because fashion is so aesthetically pleasing. It remains ELITE.

6. Michelle's hair is fashionable but practical.

7. An ominous electric piano is one of my favorite indications that something nefarious is about to go down. The only thing above it is the sexy-time saxophone.

8. I remember getting in trouble because I broke my mom's credit card trying to open a locked door with it after watching this movie.

10. Putting an apple on the end of a silencer is a nice touch.

11. I was always wondering about the lack of blood splatter when the guy was shot in the mouth, while they spared no squib for the opening kill scenes with Michelle Yeoh. I'm sure the reason why will be explained in the next few scenes.

12. Fake identification making machines are always so elaborate. Well, except that one from Vegas Vacation. The guy just had Russ Griswold hold up a phony idea prop and took his picture with an instant camera.

13. Some quick trivia: While Yes, Madam! was in production, they were initially looking for male leads. Instead, Cynthia Rothrock ended up impressing studio executives while demonstrating her skills along with a few other women. They offered her the role right on the spot. That's how Yes, Madam! became Yes, Madam! and not Yes, Sir! (I'm joking about the Yes, Sir! part).

14. Yes, Madam! is also Michelle Yeoh's first feature film, which is another reason to love it.

15. I love a villain dressed in all white. Something about it screams, "I'm damn good at what I do."

16. In case you didn't know, the plot of this movie is about exposing a crooked business person. The evidence needed is, of course, on a strip of microfilm.

17. The microfilm being hidden behind a passport picture is some real James Bond ish.

18. Ohhhhhh, the bullet lodged itself into Richard, the professional accountant's brain; that's why there was no exit wound. Sure, I'll buy that explanation.

19. The accountant was conveniently British, so there was some kind of reason in bringing Cynthia's character Senior Inspector Carrie Morris.

20. Now for one of the greatest teams-ups to ever happen.

21. The two "bad guys," Asprin and Strepsil, have a pretty beautiful apartment.

22. The chicken looks uncooked and is going to give me nightmares.

23. Sneaking contraband into the old folks' home. I would also like to mention the chicken they brought looks cooked.

24. Asprin, Strepsil, and Panadol were criminals with a wholesome goal in mind, which was getting their dad figure out of assisted living and into his own place.

25. Asprin and Strepsil are some choice names, by the way.

26. The guy Panadol made a fake passport for using the dead account's passport has such an intense face ... and his passport photo is just as intense. He doesn't look shady at all.

28. Guys — good or bad — who knew how to fight in '80s movies loved a baggy chino with a tightly tucked-in tank top.

29. He decided to choke the wrong one that day.

30. Our first introduction to Cynthia Rothrock is the same as Michelle Yeoh — whooping some ass at the airport. In kitten heels nonetheless.

31. Sonya Blade being inspired by her makes so much sense.

33. You better believe there's tension between these two when they first meet. That's what makes for a great team-up.

34. Inspector Ng does not see it for Inspector Morris at all.

35. Again, FASHION is the word for this movie.

36. You ever have someone kick a teacup out your hand?

37. Inspector Morris' jumpsuit is giving me April O'Neal vibes and now I kind of wish Cynthia Rothrock was in those earlier Teenage Mutant Ninja Turtles movies.

38. "You're so rude. No one will marry you" deserves an ass-kicking.

39. Each outfit is better than the last.

40. The gun holsters are also a nice touch to these outfits.

42. Do you know how mad you have to be to climb up the side of a building to get to someone with your bare hands when your name isn't Peter Parker?

43. The choreographed fight in this small apartment is a chef's kiss.

44. The outfit changes continue to happen. Each time the movie goes back to Inspector Ng and Morris, they're both wearing something new.

45. If it weren't for Inspector Ng, Morris would try to beat the hell out of everyone to solve the case.

46. This one bad guy looks like Groucho Marx, and I can't unsee it. 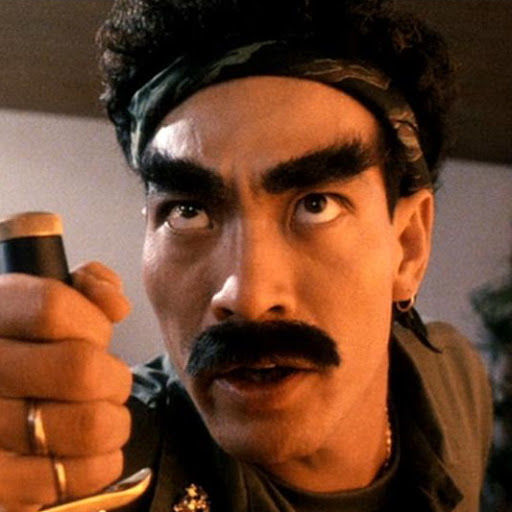 47. Something about '80s action movies always feels like it's hot with no air conditioning or any kind of cooling source present. Like it's always 80-plus degrees no matter what. It looks unreasonably warm in The Thing, and they were in Antarctica.

48. What terrible luck you have to have to end up playing pool against a pool champion.

50. Asprin and Strepsil are terrible at this criminal thing.

53. The slow-mo on some of Cynthia's moves are amazing.

55. It's taken almost an hour for Asprin, Strepsil, and Panadol to realize their lives are in danger because of the microfilm that Panadol has just now noticed is attached to his magnifying googles.

57. Come on with the popped collar.

58. These outfits are truly impeccable.

60. Whenever a movie cop hands in their badge, that's when things start getting good.

62. Where is the best place to hide some microfilm? A fake tit, duh.

64. Whoever the neighbors are in this apartment building have got to be tired of all this noise.

65. I want each outfit that Michelle Yeoh and Cynthia Rothrock have worn in this movie placed into a look book.

67. Strepsil strapped up with all kinds of weapons ready to set it off in the name of his friend.

69. The double fives on the low side right before they get down to business is how you know they're about to kick everyone's asses.

71. Front flip into a butt smash. Mario would be proud.

72. How do you slip through some glass and then throw two people off while getting yourself back upright?!

73. How did she flip off the chandelier?? I'm so happy we didn't have a chandelier in our home because I may or may not have tried that when I was younger.

74. If someone beats you in a polo shirt, you have to go home.

77. A double-kick down the stairs looks both bone-shattering and soul-shattering. My brother and I tried that. It's a miracle we survived.

78. Aspirin finally did something useful.

79. The movie ends with the crooked businessman getting shot, so I guess the case is officially closed.