Every so often, while scrolling aimlessly through streaming services, you find gems you never knew existed. Sometimes they begin playing before you've actually gotten a chance to read the synopsis. Imagine that happening, and it's Cherry 2000.

You find yourself quickly having to pause after the first five minutes to ask the burning question: Why did this man continue to roll around in lust with a robot in water if there was a chance it would get damaged? Also, why is this man married to a robot?

1. Before I read the synopsis, I was taken aback by this woman getting electrocuted during sex.
2. Now that I know it's because she's a robot, I need to understand why this man, her husband, continued to roll around with her in this water. Did he not read the handbook??

3. I would think this wouldn't be their first time having sex near water.
4. I have a lot of questions.

5. Also! In a world with fully automated sexbots, why wouldn't there be a feature for the dishwasher or sink just automatically to turn off?? Priorities.
6. How much water did she take in, and how did it enter?
7. I guess WAP is a bad thing for sexbots to have in this world. 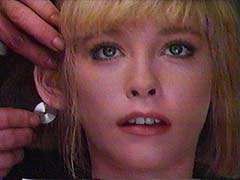 9. Do you know who would probably have WAP technology? Skynet.
10. A hotel called Gloryhole is where he can find the tracker for the same sexbot model as his wife. That makes sense.

14. It looks like Sam is going to visit the Gloryhole after all.
15. How did they get the cat in the water jug??

16. There is no way this hotel doesn't have bedbugs.
17. This movie is kind of giving me Blade Runner vibes but straight to Skinemax with a 2 a.m. time slot.

18. I'm enjoying this energy, to be honest.
19. It's the sitting sex robot right outside the door mid-use. 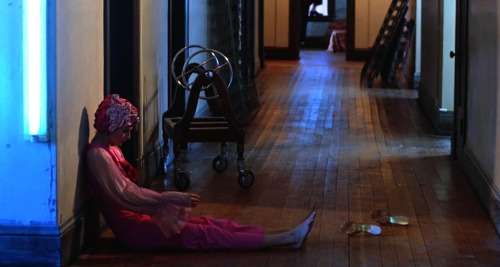 21. You better give him your credentials. LET HIM KNOW, EDITH!
22. Of course, he thought he could send her on this mission while he sat comfortably back at home.
23. And that's what his sexist, goofy-ass gets! Robbed! Should have listened to Edith about Jake.
24. Let's talk about this Mustang, though.

25. Is it a car? Is it a plane? How fast is it going? There are so many buttons and switches.
26. I would have been upset if there wasn't a sign that said, "Leaving Gloryhole. Drive safely."
27. Why are there no headlights on this car?
28. Now girl, how do you drive by feel?
29. They are driving all up and through Nevada.
30. I did some googles and Cherry 2000 was mainly filmed in Nevada.

31. Sam does need to shut up, though, and let Edith do her thing.
32. This scene of them going through the roadblock was something straight out of a Universal Studios stunt attraction.
33. Traveling eight hours away for only 15 minutes of time for him to find his replacement sexbot wife. Sure.
34. The way men programmed these robots for men.
35. How is he listening to his sex tapes out loud?
36. A tracker having red hair would be kind of counterproductive if you're trying to go unnoticed, right?
37. Why do they have so many rocket launchers?? Where is this gun emporium?

38. They are getting every last cent of use out of the stunt budget.
39. Clearly, she knows what she's doing. I would have given Sam his money back by now and told him good luck.

40. Take that back. I wouldn't give Sam a refund. I would just tell him good luck.
41. Does he not have some headphones so he can listen to his sex tapes in private?
42. Toasted rattlesnake. 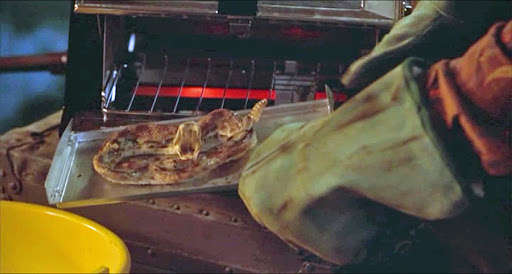 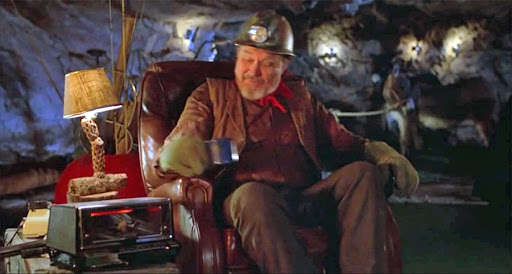 44. "A dream-like quality about her." Of course, Sam — she was programmed for your pleasure.
45. Oh, so Sam has dated humans before.
46. What are the odds of running into an ex in a post-apocalyptic world?

50. Wow. So Lester is shooting people with arrows in the face for fun.
60. LOL. Now Sam knew he wasn't strong enough to knock that guy out.
61. Nothing better happen to Uncle John. I mean nothing.
62. Not the bees. They didn't do anything. They have to be close to extinction in this world.
63. Hmmm. I guess all that junior high style flirting got the best of Edith and Sam.
64. Well, I guess listening to his sexbot tapes turned out to be a mood killer.
65. The way they have had to go through land, water, and air to get this doll.
66. GLAMOR. PUSSES. That has to be on a shirt somewhere on Etsy.
67. Oh no!! Not Uncle Jake!! DAMN IT!!!
68. I get it, but Sam could have waited till they landed to tell Edith that Jake was dead.
69. Lester is reckless.

70. The ATVs equipped with guns fit the vibe of this movie so well.

71. That, especially you to the only other Black guy I've seen in this movie, was anti-Black.
72. They don't have like a doll Dewey Decimal System??
73. He was just kissing Edith a day ago.
74. Men.
75. This robot is absolutely no help at all.

76. LOL. What a dramatic way to die.
77. Wait. How is Lester not dead??
78. Sam went back to get Edith. I know I should feel something, but all I feel is an annoyance.
79. Bruh what??
80. "Cherry, go get me a Pepsi."
81. Sam pulled a "Put that on Everything" by Brandy to get to this robot and BOOM done. Like sure, she's a robot but still.
82. Now I see why Ex-Machina ended the way it did.
83. And after all of that, he found value in being with a human woman. Not sure if that's a win for Edith, though.
84. I hope Cherry finds a better life with Ginger and her people.
85. Cherry 2000 was everything I thought it would be after those first five minutes, and I'm not at all disappointed.

It's a fan thing
Join SYFY Insider to get access to exclusive videos and interviews, breaking news, sweepstakes, and more!
Sign Up for Free
All Posts About
Fangrrls
Movies
deja view
Related Stories

How 'Knock at the Cabin's ending changed from the book