The other day, while searching the Internet for DIY project ideas to keep my kids entertained so I could get some work done, I detoured onto a page showcasing the artwork of one of the true unsung legends in comic art: Jose Luis Garcia-Lopez. I know, it’s REALLY HARD to be an unsung legend in anything, but if ever that phrase was warranted, it is for this incredible artist, who happens to be celebrating his 72nd birthday this week.

The man has forged a decades-long career crafting unparalleled artwork featuring just about every hero in the DC Comics pantheon. However, unlike George Perez, Neal Adams, Mike Grell or Greg Capullo, Garcia-Lopez did not make his bones on a specific series or career-defining storyline. Instead, his history stretches across the entire DC library. For a generation (or two) of fans, when they close their eyes and picture a DC superhero, the image they see has sprung from Garcia-Lopez’s artistic genius… even if they have no idea who he is.

He’s certainly done his fair share of monthly books, from Superman to The New Teen Titans, as well as Bronze Age oddities like the short-lived Joker solo series and Tarzan. He also drew classic single issues like the 1977 Superman vs. Wonder Woman Treasury comic. But what JLGL is best known for, even by fans who have no idea who he is, is for establishing the look of the DC heroes for the entire world to see. For decades, it has been JLGL’s designs that have graced all manner of DC licensed products. Where Neal Adams has his epochal run on Green Lantern/Green Arrow and George Perez has his classic stints on The New Teen Titans and Wonder Woman, Garcia-Lopez’s legacy can be traced back to one seemingly innocuous bit of corporate marketing: the 1982 DC Comics Style Guide.

The Style Guide is essentially a reference book for any company that's interested in using DC superheroes on their products. From Underoos to calendars, napkins, mugs, T-shirts … literally anything the Warner Bros. licensing team has slapped a DC legend on in the past 30 or so years has included an image drawn by Garcia-Lopez. It is his interpretation of these characters that have traveled the world and that have became the defining versions for millions of people who may not have ever read a single DC comic book. These few images below speak for themselves:

Style guides are the type of marketing tool that only the most devoted of fans ever cares about. But nearly 40 years later, that DC Style Guide is still discussed. Even though comics have evolved and the art has changed with it, and even though Superman has had a mullet, Batman’s lost the yellow oval logo and Wonder Woman’s armored up, Garcia-Lopez designs are still used in merchandising to this day. Fans still bid crazy money for the original art from the Style Guide and clamor for DC to publish a reproduction of it.

There’s even a Garcia-Lopez Facebook fan page full of the images, if you want to lose yourself in a glorious rabbit hole of comic art gloriousness.

Later this year, DC plans to re-issue that legendary Superman/Wonder Woman slugfest in an oversized hardcover format. I’ll be first in line to buy that. But I’m really hoping DC finally puts together a coffee table art book based on Garcia-Lopez’s work. I’m clearly biased, but I believe I’m not overstating things by saying DC is leaving some serious money on the table by not pursuing this. Jose Luis Garcia-Lopez’s artwork has defined DC Comics for close to 40 years. It’s long overdue that his greatness is celebrated and commemorated. 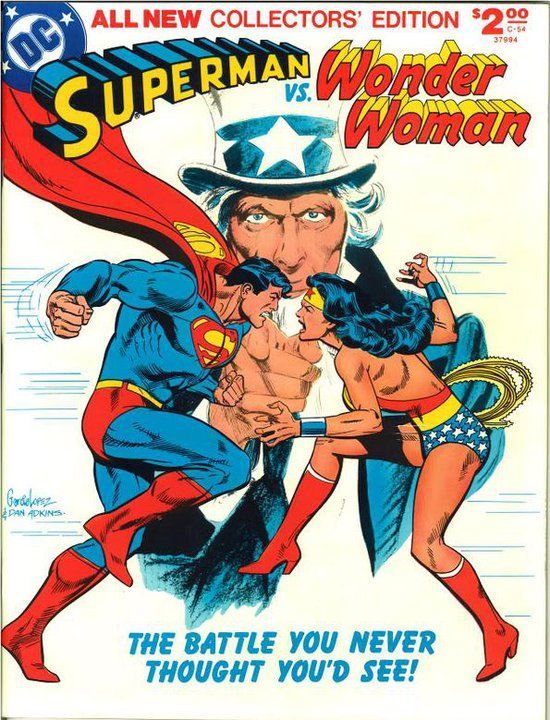 Go ahead and find me on Twitter/Facebook/Instagram and share some of your favorite JLGL artwork. It's all great, so you have lots of choices!