7 underrated Black comic book characters you should check out

As the world continues to recognize diversity within the realm of comics and superheroes, so many amazing Black characters are finally getting their due.

With DC Comics’ Nubia finally coming back into the fold, and Marvel’s Miles Morales getting his time to properly shine, comics’ diversifying expansion of their hero rosters is something for all “blerds” (Black nerds) to enjoy. However, that does not mean that all of them have gotten their fair share of time in the sun. This Black History Month, we are alleviating this issue by highlighting seven underrated Black comic book characters that all fans should be on the lookout for.

Born a mutant to an uber-rich, Muslim family, Monet posesses the abilities of super strength, intelligence, super speed, flight, telekinesis, telepathy, and the ability to transform into Penance – a mute version of herself with razor-sharp claws and red, diamond-like skin (similar to Emma Frost). This underrated character is sure to pack a punch in any comic book she appears in. Since there’s not much she can’t do, Monet has become a staple member of Marvel’s various mutant-based teams like Generation X, X-Men, X-Force, and X-Factor.

As a mutant from St. Louis, Missouri, who has the ability to “synch” with both superpowered mutants and humans to mimic their abilities, Everett Thomas is a considerable force to reckon with. Having served alongside Monet on the Generation X team, as well being a long-standing X-Men veteran, Everett has proven that he is a valuable asset in the field and a hero to both mutants and to the humans that fear them.

In 1993, Denys Cowan and the late, great Dwayne McDuffie created Raquel Ervin in Milestone Comics, which was founded by Black writers and artists that wanted to see more representation in the pages of American comics. As the first teen mom superhero to grace mainstream comics, Raquel can manipulate kinetic energy, fly, and display some levels of super-strength via an extraterrestrial device in her belt called the “inertia wind”.

Known as the third smartest man on Earth in DC Comics, Michael Holt lives up to his moniker as Mr. Terrific.

After the unfortunate death of his wife and unborn child, Michael uses his resources as a self-made, multi-millionaire tech mogul (and his Olympic gold medalist-physique) to help DC heroes battle some of their most potent threats. He even once served as Chairman of the Justice Society of America. 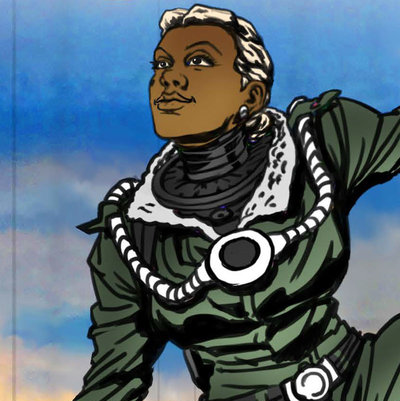 Created in 2015 by Tim Fielder of Dieslfunk Studios, which is Black owned and founded by Fielder himself — and inspired by the lives of Bessie Coleman and Harriet Tubman — Matty Watty’s story begins in the early 1900s in the Jim Crow South. However, in this world, airplanes, rockets, hovercars, and other technological advancements are commonplace and mainstream. Matty later becomes a pilot and embarks on incredible adventures throughout time and space, and is one of the most likable and dynamic heroes in the comics space right now.

Kevin Gage is a veteran of the Marines’ Special Ops who was gifted/cursed with powers after an explosion at a power plant during a mission that went wrong. Later, he uses his powers to fight for good throughout the galaxy, despite resistance from forces unbeknownst to him. Darkstorm was created by Underworld’s Kevin Grevioux (creator of Marvel Comics’ Blue Marvel and creator of Underworld), which is Black-owned and founded by Grevioux himself.

The Antagonists brings us Ultima and Destructus, who are retired villains trying to raise their superpowered kids to live a “normal” life in suburbia, all while trying to keep their infamous past buried. Brought to us by Godhood Comics, which is one of the largest Black-owned comics publishing companies in America, one that is focused on producing stories that represent primarily people of color, this gritty and unapologetic super-family is definitely something comics book readers will enjoy.