Cosmic sleuthing: An origin story for a really weird meteorite

I do so love an astronomical detective story.

In 2011, scientists found a tiny meteorite buried in a 7,000-year-old layer of dirt in eastern Russia. This space pebble was later determined to be unique, with a pretty unusual composition of elements. That was interesting enough, but moreover it had a bizarre crystal structure in it: It contained icosahedrite, what's known as … a forbidden fivefold quasicrystal.

That doesn't mean it disobeys the laws of nature or anything like that. It just means such a crystal is very hard to make, so it's extremely rare. Scientists' curiosity was piqued: Where did this meteorite come from? And so they set about solving this puzzle.

But to understand a puzzle, first you need the pieces to it. So let's lay them out.

I already wrote about the meteorite and its bizarre crystalline structure a while back, but to sum up: The space rock was found in eastern Russia, near a rural area called Khatyrka, so that's what the meteorite is called. When scientists examined it, they found it had a weird crystal in it. Most crystals have certain symmetries, and this one appeared to break the rules. As I wrote at the time:

Over the years crystallographers have found that there are four kinds of symmetries natural crystals can have: twofold, threefold, fourfold, and sixfold. These are all based on taking a shape and rotating it 360°. For example, take an equilateral triangle. If you spin it 360° it looks the same. But it also looks the same if you spin it 120° and 240°. So after spinning it all the way around, you get the same pattern three times: a threefold symmetry.

Now, you could theoretically have a fivefold symmetry, for an object that goes through multiples of 72° rotations (after five of those you’re back to 360°). But that's never found in nature. The other symmetries are very strong, and crystals find themselves displaying those instead.

It's kinda like flipping a coin and having it land on its side: it's not impossible, it's just really unlikely. Finding a meteorite with fivefold symmetric icosahedrite in it is so rare it makes Khatyrka unique.

The meteorite has an unusual combination of elements in it as well, including aluminum and copper. While present in other meteorites, the ratios of the amounts are unusual. Moreover, the mineralogy of Khatyrka indicates that about 600 million years ago it underwent an event that had high temperatures and pressures, typical for a collision between two asteroids. In fact, when scientists mimicked these conditions in a lab with samples that had the same chemical components as Khatyrka, they were able to create the same weird minerals and quasicrystal patterns! So clearly collisions play a big role in this meteorite's history.

One of seven tiny olivine crystals examined to determine the chemical composition of the Khatyrka meteorite. The scale bar to the lower left is 20 microns long. Credit: Meier et al.

These are all clues to the meteorite's origin, too. In work recently published, scientists examined tiny olivine crystals in the meteorite to look at the amounts of helium and neon in them. Olivine is very common in meteorites, but the samples of Khatyrka are so small — less than one-tenth of a gram! — they had to be extremely careful and use single grains of olivine only 40 or so microns across. For comparison, a typical human hair is 100 microns wide!

From the ratios of the amounts of those two elements, they were able to determine that a substantial amount of an isotope of helium* in the sample was created by exposure of the meteorite to cosmic rays, subatomic particles zipping through space. This is very convenient, because it also sets a clock on how long the meteorite was out there in space; the longer it's exposed, the more helium is made. What they found is that it was likely only in space on its own for 2-4 million years.

That may sound like a lot, but the solar system is 4.6 billion years old. How can this be? Meteorites come from asteroids: Larger bodies made of rock and metal that tend to orbit the Sun between the orbits of Mars and Jupiter (though not exclusively). If two asteroids collide, debris gets blasted off which then go on their own orbits. Due to forces like pressure from sunlight, these orbits can migrate a lot, bringing smaller pieces closer to Earth… close enough to hit us, turning the asteroid chunk into a meteorite.

And now the pieces of this puzzle are coming together! Khatyrka was once part of a larger asteroid that formed 4.6 billion years ago along with everything else in the solar system. About 600 million years ago the asteroid got hit pretty hard by another asteroid, creating a shock wave that changed some of the structures inside. Then, much later, about 2-4 million years ago, the asteroid was hit again. This time, a piece that would become the Khatyrka meteorite got flung off in the collision. Finally, about 7,000 years ago, a blue-green planet loomed ahead of it, and after a fiery few seconds in our upper atmosphere it fell to the ground in what would later become Russia.

Great! But… what was the original asteroid?

It turns out we can make reasonable guesses about it. There is a class of asteroids called K-types that have similar chemical compositions to Khatyrka. And one of them, a 150-kilometer-wide rock called 89 Julia, actually has an unusual spectrum that matches some of the peculiarities of Khatyrka. Not only that, but 89 Julia also has a family of asteroids, smaller rocks that share similar orbital characteristics with it. The dynamics of these asteroids indicate they probably all formed from a collision 89 Julia suffered a few hundred million years ago, which is consistent with the evidence of a collision in Khatyrka's parent body 600 million years ago! 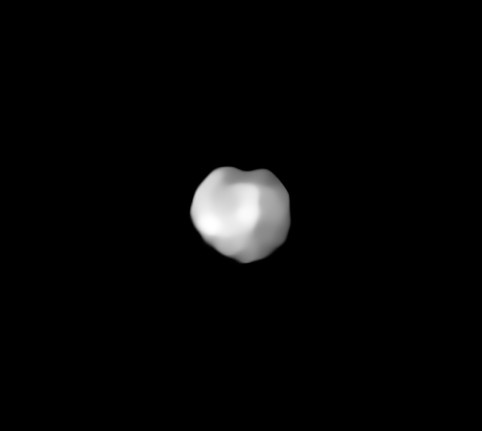 The best image taken (using the Very Large Telescope) of the 150-km-wide asteroid 89 Julia (heavily processed to bring our details) shows it to be mostly round with some cratering just visible on the surface. Credit: ESO/Vernazza et al.

And finally, the orbit of 89 Julia is near what's called a resonance, where the time it takes to go around the Sun is a simple fraction of the time it takes Jupiter to orbit. An asteroid in this orbit can be strongly affected by Jupiter's gravity. 89 Julia is near the 3:1 resonance (orbiting the Sun three times for every one time Jupiter does) but not exactly on it. However, after a collision, the chunk that was to become Khatyrka could have moved into this resonance, which would have quickly dropped it into the inner solar system. And that explains why it was only in space all by its lonesome for just a few million years before hitting us.

So, is it case closed? Well, you can never be 100% sure in these situations, but the evidence, while circumstantial, looks pretty good. Maybe someday when we're out in the asteroid belt mining for water and other precious commodities, someone will get a chunk of Julia, test it, and find this paper in the database. That's actually something of a lovely thought.

I have to tell you one more thing about this. As you may know, I am the technical consultant for the CBS series Salvation, about an impending asteroid impact that threatens life on Earth. The writers wanted to use a semi-fictional rocket motor called an EM drive (based on an idea that is real, though, in my opinion and that of many, many others, cannot actually work in real life). Part of the plot of the first season was that the drive needed some component that was rare and extremely expensive. My first thought was iridium, a metal rare on Earth but common in asteroids (the irony of using a metal that comes from asteroids to stop one appealed to me), but it turns out iridium isn't all that expensive.

But then I remembered writing the original article about icosahedrite! So I pitched it as the solution, and the writers loved it. It was incorporated into the show, and became a big subplot over a couple of episodes (involving a sneaky caper, something I've always wanted to help set up). That was pretty satisfying.

And now I learn that we may know where this meteorite came from in the first place. That's pretty satisfying, too.

* By definition, helium atoms have two protons in them, but can have different numbers of neutrons. A helium atom with one neutron is called Helium-3, or 3He, and that's what was measured in Khatyrka.

Correction (March 28, 2018): I had originally put in the wrong image of the asteroid 89 Julia! The link for the VLT image has four asteroids in it, and I misread the caption, so I cropped the wrong one. My apologies! And thanks to @cephalopernicus for pointing this out.