After so many years writing about astronomy, I am pleased to report that there are still things going on in the Universe that can make the hair on the back of my stand up.

Let me share a multi-part story with you about dancing dead stars, what strange beast remains after the music stops, and the sometimes explosive result. Very explosive.

White dwarfs are the leftovers of stars like the Sun after they die. When a star like that runs out of nuclear fuel it swells up into a red giant, blows off its outer layers, and leaves behind only its intensely hot and dense core. This is the white dwarf.

By hot I mean sometimes well over 100,000° C, and by dense I mean a single cubic centimeter of it (the size of a six-sided die) would have a mass of a ton or more, so yeah, hot and dense. But with a mass of about half the Sun in general, they have fierce gravity on their surface too, 100,000 times Earth's. On a white dwarf I'd weigh well over 8,000 tons. Oof.

The nearest white dwarf to us, Sirius B, has the mass of the Sun but the size of the Earth. For comparison, the Sun is over 100 times wider than Earth. Credit: ESA and NASA

We know of lots of white dwarfs in the galaxy, and sometimes we find them in binary pairs orbiting each other. They started off life as a regular pair of binary stars, but after each component ran out of fuel, what's left is orbiting white dwarfs. They can sometimes orbit very close together; when the first star swells up it can actually envelope its companion, and the drag of being inside another star (!!) causes them to fall toward each other. This can happen again when the second star goes red giant, too, leaving behind a very tight binary pair of white dwarfs.

Like, say, ZTF J2243+5242, a recently discovered binary white dwarf pair that orbit each other in just 8.8 minutes. Yes, minutes.

Not only that, they eclipse each other every orbit! From our point of view we see the orbits nearly edge-on, so the stars physically block each other every half orbit as one passes in front of the other. The beauty of this is that it allows the masses of the objects to be found — they turn out to be lightweights, each about one-third the Sun's mass. They're small, too, about 40,000 kilometers across each (the Earth is about 13,000 km wide, for comparison).

The binary white dwarf system ZTF J2243+5242 (arrowed), a pair of “dead” stars orbiting each other in under 9 minutes. Credit: ALADIN/Pan-STARRS

Given their mass and period, the astronomers find they are separated only by about 86,000 km! That's close. So close that the gravity of each distorts the other, drawing them both into egg shapes.

The astronomers found that the orbital period of the system is decaying, too, and in something less than 400,000 years the two will merge into a single object! Given their low masses that will likely also be a white dwarf.

This all amazes me; imagine, two objects with stellar masses so close together they toss each other around in less than 9 minutes! Incredible. No wonder I got a bit of a frisson when I read about these.

But there's more. What would happen if, say, two white dwarfs with more mass merged? There's a limit to how massive a white dwarf can be. Their tremendous gravity squeezes them hard, but they're supported by a weird form of quantum electron repulsion that can resist that force. But at 1.4 times the Sun's mass — what's called the Chandrasekhar limit — even that force can't hold them up, and they collapse to form an even denser neutron star.

Usually. Or, I should say, eventually. Sometimes the collapse doesn't happen right away, and you're left with a weird, fiercely hot object that might have more mass than the Chandrasekhar limit. What would that look like? 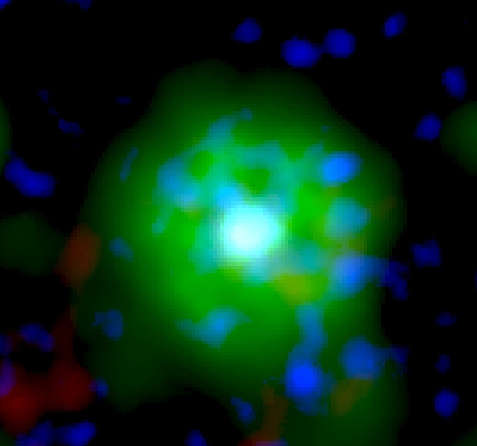 IRAS 00500+6713 (shown in green indicating the glow of very hot neon) is the expanding debris from an unusual supernova, possibly a Type Iax, where two white dwarfs merge. In this case the merger left behind an odd type of white dwarf that may explode again in 10,000 years or so. Credit: ESA/XMM-Newton, L. Oskinova/Univ. Potsdam, Germany

That's the star and nebula IRAS 00500+6713, what is very likely the gaseous debris blown off by a pair of massive white dwarfs when they merged and created a low-energy supernova. The key factor here is that the central star lacks any sign of hydrogen and helium, which is what you'd expect if two white dwarfs merge (those elements are all long gone in the dwarfs, fused into heavier elements when they were still in the centers of normal stars). Modeling the observations of the central star, the astronomers who studied it find is mass is at least 1.5 times the Sun's — that's well above the limit, so this is a super-Chandrasekhar white dwarf!

It may not have collapsed yet due to rapid rotation, with the centrifugal force outward partially negating the huge gravity inward. There's a time limit on it, though. It has a huge magnetic field, and as the star spins it sweeps up material around it. That acts as a drag on the spin, slowing it down. Eventually — likely in about 10,000 years — it will slow enough that the outward force is too low to support it, and it will collapse to form a neutron star. When it does, it will explode, becoming a supernova.

That is Sgr A East, a cloud of gas very close to the supermassive black hole in the center of the Milky Way. It's been known for a while, originally thought to be the expanding debris from a supernova when a massive star exploded. But very deep observations of X-rays using the Chandra X-Ray Observatory (named after the above-mentioned Subrahmanyan Chandrasekhar) showed its chemical composition fits better with a peculiar white dwarf explosion called a Type Iax supernova. It's similar to the usual Type Ia (when, say, two normal white dwarfs merge and immediately explode) but has odd merger conditions where the ratio of elements created is different. It likely has to do with turbulence in the white dwarfs as they merge; the matter from the two doesn't mix cleanly and that can change the nature of the explosion.

Now I'm cheating a bit here; Sgr A East may not have formed from a weird binary merger like IRAS 00500+6713 did, but it did form under unusual circumstances. So it's possible that when IRAS 00500+6713 does explode, the expanding debris will look like Sgr A East. Maybe. They may not be twins, but they're at least cousins.

I'll note that Type Iax supernovae have been seen in other galaxies, but never before in our own. So Sgr A East's origin is an important discovery for astronomers, who can use it to better understand this unusual class of exploding star.

So there's your story, as promised. I love that the Universe has so many plans for white dwarfs (and I didn't even get to planetary nebulae…). I tend to think of them as the end points of stellar lives, but in fact they have a lot of possibilities even after that. Good for them.