It may be the beginning of fall, but many places around the United States it still feels like summer. Soon enough, though, the days will get shorter, the leaves will turn, and Halloween will be upon us. That's why it's fitting that so many of the books on this list feature witches, spooky atmosphere, and all-out horror. It's that time of year, and we're ready for it.

Whether you're in the mood for fantastical novels set against Jamaican history, terrifying books about first contact with alien life, or tales of dark occult happenings behind the closed doors of illustrious academic institutions, we've got book recommendations for you to pick up this October.

Four years before Jamaica gains independence from colonial rule, a mysterious little boy named Moshe is born. This epic novel follows his story, and that of his soul mate, through their otherworldly love story set against the backdrop of Jamaica’s history. The author took inspiration from Jamaican folklore for this one, so you can bet I’m excited to read it.

The Library of the Unwritten - A. J. Hackwith (October 1)

A book for people who love books, this fantasy novel is set inside the Library of the Unwritten, which is located in Hell, and it’s the place where books that are unfinished by their authors reside. And every once in awhile, a character from one of these uncompleted books becomes restless and makes their escape — and it’s up to the librarians to track them down.

Witches are kind of our thing here at SYFY FANGRRLS, so the Hex Life anthology is absolutely right up our alley. This collection of short stories features “Wicked New Tales of Witchery” by acclaimed authors such as Kelley Armstrong, Jennifer McMahon, Alma Katsu, Sherrilyn Kenyon, Kat Howard, and more — it’s such a good author list, you can bet each story in this collection will be amazing.

Female anger is a thing I can’t get enough of in my books these days, which is why I’m so excited about Katie Lowe’s The Furies. This novel is set at a boarding school and opens with the mysterious death of a sixteen-year-old girl. Who is she, and what happened to her? One group of young women, who become fascinated with their school’s history and its affiliation with the occult, may know the truth, and newcomer Violet may find answers she didn't want to know .

Having just read Leigh Bardugo’s excellent found-family epic-heist fantasy duology Six of Crows and Crooked Kingdom, you can bet I’m pretty excited for her new book Ninth House. It’s billed as a supernatural thriller, set among Yale University’s secret societies. It’s a place that Alex Stern never thinks she’ll see, but she receives a full ride from a mysterious benefactor and must find answers within the institution’s hallowed halls.

This novella is set in the rural UK, as Gideon Belman returns home to his family farm, called Ormeshadow, in disgrace. The fate of the family is tied into the house, which has its own motives and emotions — and it doesn’t like Gideon at all. This seems like a dark, brooding fantasy with incredible atmosphere and I can’t wait to dive in. 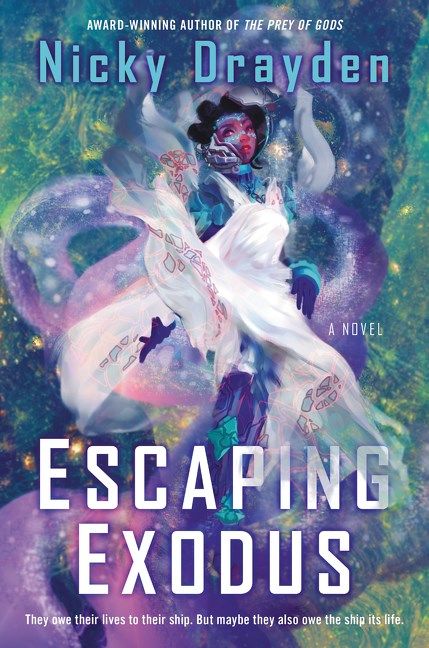 Nicky Drayden’s books are always go-to recommendations for me. They’re bizarre and weird, but with her talent and writing skills, she manages to make them work very well. Her latest novel, Escaping Exodus, is set in a future where humanity has taken to the stars but hasn’t found a new home planet. Seske Kaleigh is the heir to her clan’s throne but hasn’t spent time preparing for the role. Will her constant need for adventure be a problem when she finally must become their leader?

I haven’t read Sue Burke’s Semiosis yet (it came out last year), but it’s one novel people just keep talking about. It’s a sci-fi horror novel about alien contact, in which a group of humans is trying to set up a colony on a new world, but they don’t know that a local life form is watching their every move. Now the sequel is here, and because this is a duology, it means the story is complete — which makes it a perfect opportunity to dive into both these books.