Orlando is best known for its theme parks, with millions of tourists traveling to the city each year to spend time at Walt Disney World or Universal Studios. Along with the theme parks, however, come thousands of young, nerd-loving creatives who flock to the city in order to work there.

The town has embraced this burgeoning local community, and the geek scene in Orlando is now thriving with nerd-themed bars, restaurants, and everything in between. Read on to learn more about the greater Orlando area establishments where those who are so inclined can congregate to eat, drink, and be nerdy.

Located just northeast of Orlando in Winter Park, the Geek Easy started out as a secret nerd-themed bar behind a comic book shop, but has recently taken over the store’s entire space (don't worry though — the comic shop just moved next door).

Geeks who visit the bar will have a chance to drink a beer while taking in the bar's nerd-inspired décor, which includes lights that look like the Mario Bros. question blocks. For those looking for something more to do while imbibing, the Geek Easy also hosts regular events like nerdy karaoke, geek trivia, board game nights and even an open mic night for nerds who are comedically inclined.

While the Geek Easy does have some video games available for patrons to play, those who are want to spend more time with a controller in their hands should give Player 1 a try.

A $5 cover charge will get you unlimited access to a slew of arcade games as well as console games for PlayStation 4, Xbox One and Nintendo Wii U free of charge. The craft beer selection here is also extensive, with less common meads and sours intermixed with more traditional IPAs and lagers.

Those looking for more to do than play video games can also check out their Nerdgasm Trivia nights, which take place every Tuesday. 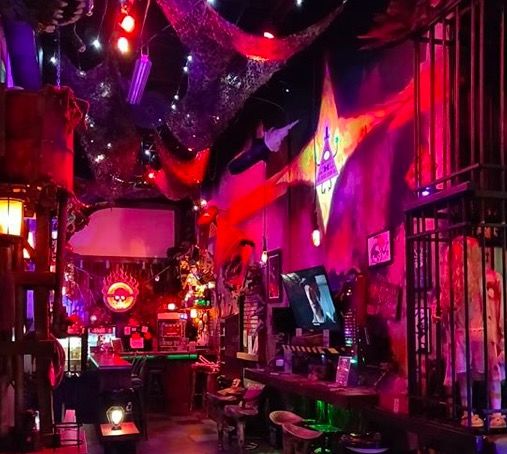 This post-apocalyptic themed craft beer bar is located inside Gods & Monsters, a comic book shop on International Drive in Orlando. The vibe here is darker than at the Geek Easy, however, with the décor evoking Fallout more than Mario Bros.

Patrons here also have more than 120 craft beverages to choose from, and in addition to trivia events and cosplay cage dancing (on certain evenings), the establishment also holds themed events like Star Wars Masquerade and Dungeons & Dragons & Drinking.

For those wanting a more interactive night out with their friends, you can get a ticket to their 1.5-hour escape room experience, where your group can order drinks while working through a series of puzzles and challenges to find the supplies your team needs to survive in the post-apocalyptic themed bar.

The Cloak & Blaster's main focus is tabletop gaming, and has a library with over 500 games for you to choose from as well as a handful of Xbox and Nintendo Switch video games. Renting a tabletop game costs $1, though they allow you to bring your own game if you like.

While you play, you can also partake of the Cloak & Blaster's drink and "tavern fare," which includes Dragon Eggs (sriracha-infused chicken bites) and Avocado Kedavra (a turkey avocado sandwich), among other things.

The Cloak & Blaster also has a nerd-themed trivia nights, and there are also themed events like Hobbit Days (costumes encouraged but shoes required) and their annual Blast-O-Ween night, where adults dress up in costumes and enjoy some Halloween candy with their craft drinks.

Speaking of Halloween, downtown Orlando also has the year-round Halloween bar Cocktails & Screams, which has elaborate, detailed theming that doesn’t creep over to the cheesy side. As its name suggests, Cocktails & Screams specializes in themed craft cocktails, which include beverages like Witches Brew, Drunken Pumpkin, Screamin' Tiki and Frog's Breath.

They also host several events that include a "cereal killer" Sunday brunch, a Vampire Ball and a Thriller Dance Off. Even if there isn't a special event, patrons are still encouraged to come dressed up in their Halloween finest. Many nights also include live music, and there’s plenty of photo ops with monsters of all kinds for those you want a selfie with a ghoul or goblin or two.

Looking for a place with great food that’s a bit more low-key? Soupa Saiyan is an anime-themed noodle bar that offers pho, ramen and udon options that are, in a word, delicious. Here you can slurp up your soup while looking at memorabilia from Dragon Ball Z, including a life-sized statue of Vegeta. The place is small and unassuming and the line to order is often out the door. The wait is worth it, however, if you're a noodle aficionado and/or really love Dragon Ball Z.