The world of comics has long been decidedly white and male but thanks to the power of the internet and with it the growth and proliferation of the medium beyond the status quo, the culture has shifted far beyond white, male, and cis.

These are eight Black comics creatives whose work you must read.

We've written about Vita Ayala before — their work is vast and incredible. They are a name. They are prolific. They've written for DC (Aquaman, Batman, Supergirl, to name a few) and Marvel (Nebula, Iron Heart, Morbius) to much acclaim, but they've also created their own work like The Wilds (Black Mask Studios) and Submerged (Vault Comics) and readers are very thankful.

In their series Queen of Bad Dreams, Danny Lore asks the question, "what if dreams broke through to reality?" Now, in the comic series that's not necessarily a good thing, but here? In the real world? It means that we get to read Lore's work, which is a dream come true.

Late last year, Lore also collaborated with Vita Ayala on Dynamite's foray into bringing everyone's favorite double-0 to the comics page with their James Bond series (a perfect thing to pick up while we wait for the movie, to be honest). We can't wait to see where Lore goes next, but we know we'll be joining along for the ride.

Ngozi Ukazu's beloved webcomic Check, Please! recently came to an end after seven years. Since its inception in 2013, the comic has been compiled and distributed in print and has the honor of being the highest-funded Kickstarter comics project ever created, while Ukazu has won awards and become a New York Times bestseller, and readers all over the world have fallen for Eric "Bitty" Bittle and the exploits of his college hockey team.

Ebony Flowers brings a swath of expertise to her Eisner-nominated work. She's an artist, an ethnographer, and holds a PhD in Curriculum and Instruction specializing in qualitative research and evaluation, picture-based methods, curriculum studies, and S.T.E.A.M. education.

Her first book, Hot Comb, is a powerful coming-of-age story of Black women's lives and matters of race, class, identity, and hair.

Roxane Gay is known for her incredible prose, whether it's Bad Feminist or Untamed State or a slew of other essays and books she’s written. Yona Harvey is a well-known American poet. Both women are award-winning creators. They're both comic book writers. They're both the first Black women to write for Marvel.

In 2016, World of Wakanda debuted to critical praise and readers excited to delve deeper into the world that Ta-Nehisi Coates created in his much-lauded Black Panther series. In it, Harvey and Gay (along with Coates) center Black women and their lives within a society that has been a part of Marvel since 1966. 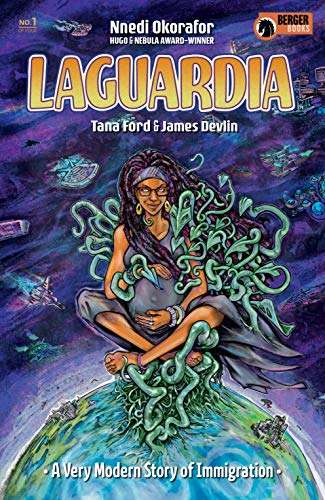 If you love Shuri (and who doesn't??), you should know Nnedi Okorafor, who wrote Marvel's Shuri series, a Nommo Award-winner for Best Graphic Novel. Okorafor also wrote Wakanda Forever and was nominated for a Hugo award for her work on Black Panther: Long Live the King for Marvel. Basically, she's done a lot of cool comic books about your favorite superheroes.

In addition to her work at Marvel, Okorafor has also wrote an Africanfuturist comic series called Laguardia from Dark Horse and numerous award-winning sci-fi and fantasy novels. Her next novel, Ikenga, is coming out this August so you should probably go ahead and pre-order it now.

Nilah Magruder is best-known for her middle-grade graphic novel M.F.K. which won the Dwayne McDuffie Award for Diversity, but she has also written for Marvel Comics and illustrated children's books for Disney-Hyperion, Scholastic, and Penguin.

As if that weren't enough, she has also published short stories, her work being included in an anthology called All Out: The No-Longer-Secret Stories of Queer Teens throughout the Ages.

Admittedly, we're biased. Stephanie Williams is a writer for SYFY FANGRRLS, but beyond her work for this site (which is always thoughtful, funny, and, above all else, purely her) Williams — a huge comics fan — is a webcomic creator in her own right. Parenthood Activate! is an autobiographical comic "sharing the everyday triumphs and struggles of being the mom to the world’s shadiest but lovable smol human," featuring art by author and artist Sarah A. Macklin.

She also writes But What If Though, featuring pop culture and comic icons existing in remixed worlds, and her fan comic Living Heroes, starring Marvel heroines "living single" in a '90s kind of world and glad they've got their girls, was recently funded on Kickstarter. Williams is one to watch, for sure.

It's a fan thing
Join SYFY Insider to get access to exclusive videos and interviews, breaking news, sweepstakes, and more!
Sign Up for Free
All Posts About
Comics
Fangrrls
Get Rec'd
lists
You May Also Like
Recommended by Zergnet
Latest on SYFY WIRE