Happy Pride Month! The Coronavirus pandemic has caused some of our most anticipated queer SFF to be rescheduled for later in the year. But there is a silver lining — now is the time to catch up on the glorious books we might have missed.

We've got lesbian vampires, magical Edwardian England, space opera in deep space, mermaids inspired by rap songs. Now more than ever, it's hard to concentrate, and rightfully so. Transportation fiction is a small cure, but when things feel hopeless, it's important to support marginalized content creators.

Here are seven queer science fiction and fantasy books to read this month. 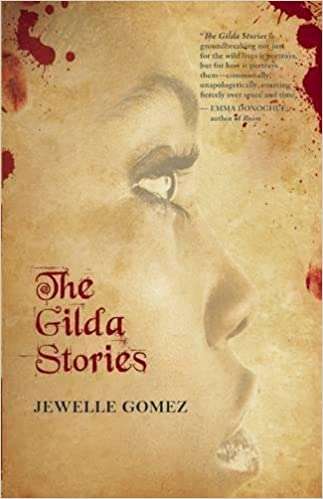 Vampires are in the air this year, but this queer vampire novel was first published in 1991. It was first brought to my attention a few months ago and I'm kicking myself that I haven't read it before. Everyone who didn't tell me about it is fired.

The Gilda Stories is set in 1850s Louisiana and follows the titular Gilda who escapes slavery and becomes a lady of the night in two ways — she begins to work at a brothel where she's turned into a vampire by two women. Immortal now, Gilda spends two centuries searching for the idea of home and found family.

This novel is heralded as a groundbreaking classic that comments on gender and race. More queer Black vampires, please!

This acclaimed novella has also been popping up on the timeline recently. When N.K. Jemisin refers to something as "a love story as painful as it is beautiful and complex," it goes to the top of my reading list. High fantasy? Expansive world-building? Ancient gods? Forbidden love? Yes, I've already one-clicked A Taste of Honey.

In this one, Aqib bgm Sadiqi, the fourth-cousin to the royal family and son of the Master of Beasts, has fallen for a soldier named Lucrio. The romance is a first for the highborn Aquib. But despite the disapproval of his family, Aquib and Lucrio try to survive the world that's against them.

For those of us looking to start a new series, C.L. Polk’s historical fantasy about a cabal of noble families who use their powers to influence entire nations might be just the thing. In the Edwardian-inspired lands of Aeland and Laneer, Miles Singer does everything he can to get away from his family, including joining a world war. Unfortunately, nothing helps him escape his destiny or change who he is. However, faking his own death might.

Now a new man, he begins a life as a doctor servicing a poor veteran’s hospital. When the death of one of his patients exposes his healing witchmark, Miles sets off to investigate his murder, leading him back to his family and a possible new romance. Fortunately, the Kingston Cycle continues with Stormsong and follows Mile's sister Grace.

This is another series of novellas that come highly recommended. The Black Tides of Heaven is the introduction to JY Neon Yang's highly acclaimed Tensorate Series. Yang’s novella follows Mokoya and Akeha, the twin children of the Protector. Sold to the Grand Monastery as children, Mokoya developed her strange prophetic gift to see what would happen while Akeha’s power lies in the possibility of what could be. Meanwhile, they’re surrounded by a growing rebellion between the Machinists and the Tensors. Akeha leaves the Tensorate behind and joins up with rebels, even if it means risking the bond he has with his sister.

I mean, you had me at rebels and prophetic gifts.

This mermaid novella is inspired by a song produced by the rap group Clipping for the This American Life episode “We Are In The Future.” Hamilton’s Daveed Diggs co-wrote the song and narrated the audiobook.

Inspired by true accounts, The Deep is about the water-breathing descendants of African slave women who were tossed overboard and built their own society. Yetu becomes the historian of her people. She remembers everything, no matter how painful or happy. But when the memories begin to hurt her, she swims to the surface and tries to explore the world her ancestors were forced to leave behind. Yetu’s journey is about memory, healing, and reclaiming the stories that were stolen.

I love mermaids, and I’ve never seen them done this way before. I can’t wait to dive in (pun intended).

I’ll admit to ordering this book because of its cover. Also, Nicky Drayden is the award–winning author of many other novels.

Set in deep space, Escaping Exodus paints a picture in which Earth is long gone and the generations of humans have survived on colonies within enormous vacuum-breathing space beasts. But in typical human fashion, in order to survive, the colonists have to mine their beastly homes for resources. Seske Kaleigh has a future as clan leader, but after her people cull a new beast. With their home plagued by tremors, Seske teams up with her best friend to go in search of answers. There’s a price for their survival. And when her role as leader is challenged by a worthy opponent, Seske knows that she’s still the best person for her world... even if it means beating her sister.

Melissa Caruso’s latest Rooks and Ruin trilogy kicks off with The Obsidian Tower. Ryx has one job: Keep the Black Tower sealed. When your grandmother, the powerful Lady of Owls, gives you a task, you do it. But when Ryx is tricked into using her life-draining magic to open the Black Tower’s gate, she not only unleashes a demon from the Nine hells but also kills a foreign dignitary visiting her family’s kingdom. Now it’s a race to try to claim the Black Tower’s power and every diplomat, mage, and nation wants a chance at it. Naturally, Ryx runs away and falls in line with a group of “magical experts” who might be the answer to all her problems.

Promising a complex high fantasy and a diverse cast, I’m looking forward to this series starter.

It's a fan thing
Join SYFY Insider to get access to exclusive videos and interviews, breaking news, sweepstakes, and more!
Sign Up for Free
All Posts About
Fangrrls
Fangrrls book club
Get Rec'd
Pride Month
lists
Related Stories