We’re so close to making it through 2020. As a writer, I couldn’t even have dreamed some of these plot twists and turns. This year does not follow the Hero’s Journey. But, instead of going down the usual disaster spiral, I’m hiding away in some books. Fiction, after all, has to have rules, if not a satisfying ending.

Spellbreaker by Charlie N. Holmberg is set in a magical Victorian England where there are two kinds of wizards: those who pay for spells and those with the ability to break them. The use of magic has been regulated in a way that benefits the aristocracy. For Elsie Camden, a spellbreaker, her gift is a crime, but she still uses it to help the common man as part of an underground organization called “the Cowls.” When she gets caught breaking an enchantment, she’ll do anything to save her skin. Even if it means working for the elite Bacchus Kelsey. Meanwhile, wizards all over the city are turning up dead. Part historical fantasy, part cozy mystery, this one sounds delightful.

A Deal with the Elf King - Elise Kova (November 6)

If you've ever watched The Hobbit and found yourself thirsting after Thandruil, then A Deal with the Elf King is likely the pick for you. After three thousand years of being hunted by elvish creatures, humans now enjoy a peace treaty with the magical land of Midscape. All the human realm has to do is tithe a girl from the village to be the Human Queen. Luella is an herbalist and studying to become her town’s only healer. She thought she had escaped being chosen, until one day the Elf King arrives for her. Not just to make her his queen, but to save his land. Perfect for fans of Naomi Novik’s Uprooted and A Court of Thorn and Roses by Sarah J. Maas. 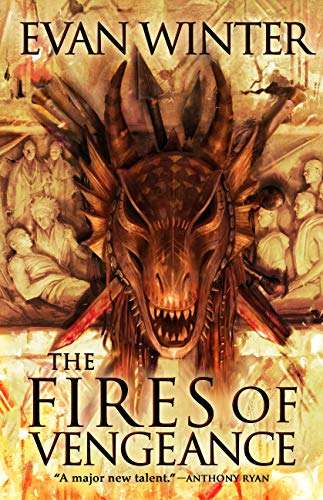 Turn up the heat on your epic fantasy with the sequel to The Rage of Dragons by Evan Winter. Book one introduces the Omehi people, who have been at war for nearly two centuries. There are those born with gifts. For instance, one in every two thousand women has the power to call down dragons. And one in every hundred men Hulks-out into a killing machine. But our reluctant hero, Tau, is very much un-gifted. So gift-less he plans on injuring himself to get out of the war. Instead, he sets off on an epic path of revenge and fury. The Fires of Vengeance picks up where he left off in a fierce fight for his queen, and for survival.

Master of horror Jonathan Maberry delivers with Ink, a standalone supernatural thriller about a memory thief who feeds on dreams. Tattoo-artist Patty Cakes has her dead daughter's face inked on the back of her hand. Private investigator Monk Addison hunts down killers. Each of his victims is tattooed on his body. Slowly, Patty and Monk’s tattoos begin to fade, and the memories of those faces right along with it. They’re not the only ones. All over the town of Pine Deep, people’s most precious memories are being stolen. The monster feeds on the past. If memories are the things that anchor us to the world, what happens to us when those memories are gone?

Best known for her Chicagoland Vampires, Chloe Neill kicks off a brand new series with The Bright and Breaking Sea. Inspired by the Napoleonic wars, this book follows Kit Brightling, an orphan who clawed her way to becoming one of the few female captains in Queen Charlotte's fleet. Kit’s ship is small, but fast... at least, it better be when Kit is sent on a special mission with a partner she never asked for. Enter Rian Grant, Viscount Queenscliffe, and veteran of the Continental war. Kit doesn’t know or trust him. Their mission: to sail to a dangerous pirate quay and rescue a spy for the Queen. Magic, the high seas, and a slow burn romance has me high key excited for this one.

The Burning God is the final book in The Poppy War trilogy. When I read The Poppy War a few months ago, I was completely blown away by its intensity. Every time I thought I knew where the plot was going, I was wrong! I’m not finished with the sequel, The Dragon Republic, yet, but I wanted to celebrate the launch of the closing chapter. Fang Runin, aka “Rin,” is a character that you want to root for, even when she’s making ~bad~ decisions. She took her destiny into her own hands when she worked her ass off to get out of an arranged marriage and into the most elite military school. Rin is a fighter, a survivor. These books are brutal and violent, and leave me thinking about them even long after I’ve finished reading. I can’t wait for The Burning God.

It's a fan thing
Join SYFY Insider to get access to exclusive videos and interviews, breaking news, sweepstakes, and more!
Sign Up for Free
All Posts About
Fangrrls
Fangrrls book club
Get Rec'd
books
lists
Related Stories