Get Rec'd with Angélique Roché: 10 comics for your pull list

Angélique Roché wears many hats in the nerdsphere. She's a professional host, moderator, voiceover artist, journalist and photographer, just to name a few. She's been a part of the SYFY WIRE family for a while, too, and when it came time to ask around for some recs to celebrate Women's History Month here on FANGRRLS, we knew who we had to tap for her picks.

Below, Roché recommends 10 picks from her own pull list that comics fans should definitely check out: 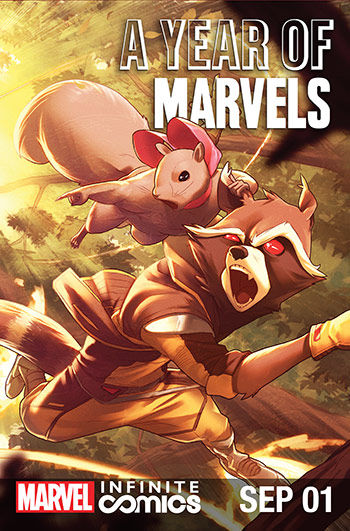 "Simply put, this story is a fast-paced anthropomorphic romp through New York City starring Rocket Raccoon and Tippy-Toe (and an army of squirrels) battling a deep-cut villain and talking trees that hurl acorns. What is there not to love?

"I love vampire stories and have been a huge fan of the Anita Blake Vampire Hunter series by Laurell K. Hamilton. Fun fact: my first fanfiction was writing Anita Blake stories with my best friend in high school.

So, when I found out Marvel adapted Anita Blake into a comic book series, I was all in! Written by a number of writers including creator/author Laurell K. Hamilton and artist/illustrator Jessica Ruffner-Booth, this comic is one of my guilty pleasures — all puns intended."

"I have been a Harley Quinn fan since she first appeared in Batman: The Animated Series. I even loved her through her years-long toxic obsession with 'Mr. J.' But it was this particular run (2013-2016), drawn/written by the award-winning, real-life spouses and comics team Amanda Conner and Jimmy Palmiotti that cemented Harley in comics history. Plus it gave us Bernie the taxidermied beaver. We love to see it!"

"Written by author Rainbow Rowell, this story literally has it all: teenage superheroes, time travel, telepathically controlled spying cats, witchcraft, dinosaurs, god-like aliens, a bodiless cyborg caught in a love triangle and so much more!

I am a huge Runaways fan and love what Rowell has done with these incredibly relatable super-teens. This volume is a great introduction for new fans, fans of the Hulu show, or even a re-introduction for fans of the original run by Brian K. Vaughan and Adrian Alphona."

"This is such a unique crossover story featuring one of my favorite band of besties, the Lumberjanes and the crew from Gotham Academy. It's a fun story about making new friends and finding missing adults with a huge dash of the supernatural.

The book is written and drawn by a bunch of badass women writers and artists including Chynna Clugston Flores, Rosemary Valero-O’Connell, Jenna Ayoub, Maddi Gonzalez, and Kelly & Nichole Matthews."

"I might be a little biased but Marvel’s Voices #1 is one of my favorite comic book anthologies EVER. The anthology includes brand-new stories from unique perspectives about She-Hulk, Wolverine, Spider-Man, Blue Marvel, Black Widow, and more. Plus, it's based on the show I host, Marvel’s Voices; as I said, I’m biased.

"If it wasn’t clear, I love a good comic book anthology! This particular anthology is jam-packed with some of the badasses of the comic book world, including (but not limited to) Ann Nocenti, Louise Simonson, Amanda Conner, Laura Martin, G. Willow Wilson, Devin Grayson, Sara Pichelli and Stephanie Buscema."

There is just something special about Vita Ayala's ability to write a conflicted hero that is dealing with real-life problems on an insane scale and Livewire Vol. 1 is no exception. And honestly, I love a good complicated hero.

This story, the first collected volume of the character Livewire’s first solo-led series, starts with her on the run as an enemy of the state, figuring out what is next and if she even wants to be a hero at all."

"This is one of the most unique 'woman-centered' comics I’ve read. The writing is engaging and the art is amazing. This limited series is written by one of my faves, Tini Howard, with art by Amilcar Pinna. Besides great writing and badass art, this story features Vexana the War-Monger, an infectiously deadly war-mongering immortal witch who is here to cause all the havoc; enough said."

"One word: family. I love what author Mariko Tamaki does in the latest X-23 story. It is centered around the really cool and unique relationship between Laura Kinney (X-23) and her 'little sister,' Gabrielle 'Gabby' Kinney, aka Honey Badger.

Together they take on one of the creepiest crews in the X-Men universe, the Stepford Cuckoos, and try to uncover a top-secret plot. I also love how Tamaki writes the Cuckoos in a way that almost makes you feel bad for them… almost."