As the duplicitous android David once said (quoting a line from Lawrence of Arabia) in Ridley Scott's Prometheus, "Big things have small beginnings." And so it is with researchers at the University of Chicago and the Field Museum, who have devised a brilliant new method of investigating lunar soil retrieved from NASA Apollo missions, with the ability to detect compounds and minerals in a single grain of moon dust.

From 1969 to 1972 NASA conducted six lunar landings, which brought back a total of 900 pounds of moon rock and dust to Earth for scientific study and geological analysis. The specimens used in these pioneering new tests were collected during Apollo 17's final manned moon landing at the Taurus-Littrow highlands and valley Dec. 11-14, 1972. 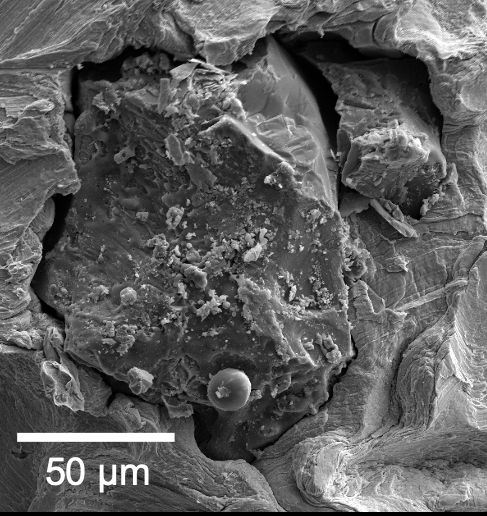 Results of the tests were published last week in the journal Meteoritics & Planetary Science, with great implications for a wide variety of future applications. The technique used is called Atom Probe Tomography (APT) and it's not exactly new, being used frequently by materials scientists in the formation of steel and nanowires. But this is the first time the science has been employed in the research of moon dust, and the results can assist in teaching us much more about the Moon's surface conditions and its formation of vital resources such as water and helium.

"We're analyzing rocks from space, atom by atom," said lead author Jennika Greer, a PhD student at the Field Museum and University of Chicago, in a statement. "It's the first time a lunar sample has been studied like this. We're using a technique many geologists haven't even heard of."

To attain her goals, Greer utilized a narrowed beam of charged atoms to carve a razor-sharp point into a single hair-width grain of soil, resulting in a tip measuring a few hundred atoms wide.

This sample was then placed inside the Northwestern University's atom probe where Greer shot it with a laser to brush away atoms one at a time. As atoms were zapped off the prepared specimen, they hit a detector plate where heavier elements, such as iron, take longer to strike the detector than lighter elements — for instance hydrogen. By calculating the period between laser firings and atoms bumping the detector, the probe determines the atom type at that position and its charge.

Within that microscopic grain, Greer identified traces of space weathering, pure iron, water, and helium that all formed via interactions of the lunar soil with the sterile cosmic ecosystem. The means to extract these necessary resources from lunar soil could aid future astronauts in prolonging their extravehicular activity and in experiments on the Moon someday.

"It's great for comprehensively characterizing small volumes of precious samples," Greer added in the statement. "We have these really exciting missions like Hayabusa2 and OSIRIS-REx returning to Earth soon — uncrewed spacecrafts collecting tiny pieces of asteroids. This is a technique that should definitely be applied to what they bring back because it uses so little material but provides so much information."

Yes, That Picture of the Moon and the Andromeda Galaxy Is About Right

World timekeepers are doing away with leap seconds

The Plague changed our DNA and we're still paying for it