So begins The Fog, John Carpenter's supernatural tale of revenge from beyond the grave, which celebrates its 40th anniversary this month. But while it's commonly seen as a sublime ghost story today, things were a lot different back in 1980. Carpenter was following up one of the scariest and most successful horror movies ever made and, to make matters worse, had to re-shoot, re-edit, and re-score the film after declaring the original version a disaster. So how did The Fog go from being "really bad" to a beloved horror?

Halloween hit theaters in October 1978. Directed by Carpenter and produced and co-written by Debra Hill, the low-budget slasher went on to gross $47 million at the United States box office, over 200 times its budget, and was considered one of the most terrifying films ever made. So how would Carpenter and Hill live up to the exploits of Michael Myers? By turning to a classic genre of literature, one of the cornerstones of horror: the ghost story.

"I just wanted to make an old-fashioned ghost story with a nod back to childhood fears," Carpenter said in a 2003 DVD introduction; in 1980, when talking to Fangoria, he was more specific about his influences. Carpenter told the magazine that he wanted to do "A Val Lewton film ... I wanted to do Isle of the Dead or I Walked With a Zombie. I love Lewton's films — they're very shadowy, all suggestion, and he has all sorts of melodrama going. I was a real fan of that sort of thing."

The inspiration behind the actual story of The Fog comes from fact, fiction, and somewhere in between. The concept of the titular fog itself was derived from a vacation Carpenter and Hill took in England in 1977, with Carpenter stating on the 2002 MGM DVD audio commentary that they "went to see Stonehenge, and as I recall I came up with the idea of having something coming out of the fog."

"I remember it was just sitting on the horizon way past Stonehenge," Hill said in the same commentary, "and John said to me, 'What if there's something in that fog? Wouldn't that be scary?' and that's how it sort of evolved."

The Fog itself is set in Antonio Bay, a coastal California town whose centenary celebration is interrupted by a band of spirited but marauding pirates who appear from within the fog to wreak bloody revenge. You see, one hundred years ago the pirate ship was approaching the bay, but unfortunately it had been exposed to a leper colony. So the townspeople got together and lit a fire on the beach; the ship's occupants believed that the fire was meant to be a guide, but instead it was led onto the nearby rocks, where it was wrecked. The town folk, including a priest, ransacked the wreck and stole all the gold it was carrying, using it to incorporate Antonio Bay, which is why, one hundred years later, the pirates are back to give the town what it deserves: a whole lotta murder.

Carpenter insists this is based on real events. "The plot was based on a true incident in California up the coast by Santa Barbara. In Goleta, California, in the 1700s, there was a ship coming in with gold on it, and they put out a fire to guide the ship but they put out a phony fire, and it ran out on the rocks so they could rob it. We had a bunch of pirates, but there was a little truth in it."

So with that knowledge, Carpenter and Hill wrote the script and began looking for somewhere they could shoot the film. "We took a trip up the coastline," Hill informed, "and we stopped at all these different lighthouses along the way, and when we stopped at this particular lighthouse it was perched out on a cliff. It looked very scary but was very, very beautiful and very, very moody, and it turned out that it's the second foggiest point in America, after Nantucket island."

The film was shot mainly in Inverness and Point Reyes in California, with one single scene shot in another infamous horror location: Bodega Bay, the setting for Alfred Hitchcock's The Birds, which coincidentally was just a few miles up the coast. Carpenter and Hill stayed with their cinematographer from Halloween, the great Dean Cundey, whose use of anamorphic Panavision lenses afforded the films not only a touch of class but also an aesthetic that belied their cost; The Fog was budgeted at $1 million.

Along for the ride in front of the camera was the returning Jamie Lee Curtis from Halloween; her mother Janet Leigh, who was still an iconic horror scream queen from Psycho; Carpenter's then-wife Adrienne Barbeau, who had starred in his television movie Someone's Watching Me; Charles Cyphers, who had also appeared in Halloween; and Tom Atkins, who would later take the lead in the Carpenter-penned Halloween III: Season of the Witch. A small part went to Nancy Loomis, Laurie's friend Annie in Halloween. The opening "ghost story" prologue was narrated by John Houseman, who worked with Orson Welles as well as winning an Academy Award for 1973's The Paper Chase.

While all of the actors do fine jobs — even Carpenter appears in a brief cameo — Barbeau is the shining light. She establishes a strong maternal presence, not just overtly with her son, but during her work as a DJ; with the unique position the lighthouse affords her, she ends up informing the town about what's going on over the radio as some kind of guardian angel. She also embodies the right physical presence; she's not built up, but she has a Howard Hawks toughness to her, so that when she's fighting off the ghosts at the climax of the film, we always feel she has a chance. Well, as much of a chance as you can have against hook-handed pirates from the spirit world. 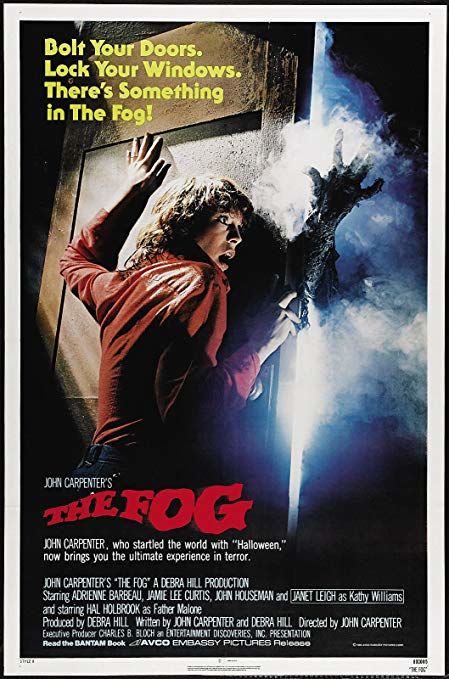 The Fog was the first of Carpenter's films to require extensive special effects. The fog itself was filmed in-camera, using a real fog machine. The crew started the machine off, then used a wind machine to blow it away, before reversing the film so it looked like the fog was heading towards the camera, instead of away, leading to some incredibly eerie scenes with the brightly lit phenomenon. Hired to do make-up was Rick Baker's protege, Rob Bottin, who also played the leader of the pirates, Captain Blake.

"Rob was great," Carpenter told Fangoria, "a real friendly and easygoing guy. I'd just get together with him and say, 'Rob I need this and this,' and he'd come in with something just right. For instance, Wormface, the ghost with the worms crawling on him. I told him what I wanted and he came back with a model of the ghost's head — unbelievably elaborate. His work was really sensational -- he brought the worms with him!"

Despite this, Carpenter shot the ghosts mostly in shadow, saying "H.P. Lovecraft always wrote about these horrible things that if you saw them, you might be driven insane, they were beyond description. And that's exactly what we tried to do with the ghosts, mostly keep them as silhouettes."

But, after filming was completed and the film was edited and scored, Carpenter knew he had a problem: "It was really bad," he remembered for the 2003 DVD, "I mean, really bad." On the disc's commentary, Debra Hill identified a more contemporary problem with the film: "We had to get a little gorier. I think at that time David Cronenberg had just come out with Scanners, and he had taken the genre to a point where we had to go back and reassess some of the scares in this movie."

In response, they went back and shot new material designed to up the scare quotient in an era where gore had become a part of life. Initially, Carpenter had not shown the three fishermen being killed on the trawler, just showing the fog on the boat, but he went back and shot a much more visceral encounter where all three men are violently slaughtered by Blake's men.

Carpenter also decided spookier material was needed for the introduction, so he and Hill went out with the second unit and shot the surreal scenes of the town that run under the extended title credits. It's a brilliantly creepy opener that really sets the tone, along with the ghost story prologue, about what this film is about. There's almost a kinship with Carpenter's later adaptation of Stephen King's Christine, and you do feel that the scenes of mayhem that come over Antonio Bay like a wave in that sequence would be perfectly at home in a King novel.

Along with a subtler and creepier new score, the new version was much more satisfying to Carpenter and Hill. "It's now more exciting," Carpenter said in 2003, "and its narrative drive is much more straightforward and it's much more fun than the first version I did."

While the original version has never been shown publicly, there is a confidence in the final cut of The Fog that no one could ever construe as being anything near bad. It's perhaps ironic that today The Fog has become what Carpenter and Hill originally envisioned: an old-fashioned ghost story, especially in juxtaposition with modern takes on the genre (not even mentioning the 2005 Carpenter-sanctioned remake).

The picture is a slow burn for sure, but the patience of Charles Bornstein and Tommy Lee Wallace's pacing and the elegance of Cundey's cinematography allow the film to slowly tangle you in its net before quickly ratcheting the tension up to unbearable levels. Carpenter's score does the same; its slow pulsating beat and sparse and restrained notes are the antitheses of Halloween's frenzy, carrying the feel of inevitability. Blake's plot is a classic revenge tale, but in essence The Fog's main thematic line — supernatural entities carrying out revenge by stalking the descendants of those who wronged them, thus revisiting the sins of the fathers upon the sons — predates the similar and decidedly more iconic A Nightmare on Elm Street by four years.

Upon its release, The Fog was a box-office success, domestically grossing $21 million, but it was not especially well received critically. Vincent Canby said it was "constructed of random diversions," while Roger Ebert said the film's "idea just doesn't work out."

Despite this, The Fog has gained much more of an audience in recent years, benefiting from the special-edition DVD craze and an increased interest in ghost stories from films such as The Conjuring to the point where you can go into a store and buy an action figure of Captain Blake. The Fog also has great relevance with people searching for a more honest appraisal of history, with Antonio Bay's plot intentionally mirroring the founding of America, another bloody event that gets smoothed over, usually with a liberal dose of turkey. Perhaps the best note to leave on comes from Carpenter himself.

"A lot of American history — and gloriously, I don't think there's anything wrong with it — is due to the fact that we were these crazy outlaws, thieves, pirates, there's a lot of corruption in America, and glorious corruption. Back in the old days, we had a pretty wild beginning."

The Werewolf Class of 1981: Horror experts on the 40-year staying power of four classics