In just a few weeks, Emmet, Wyldstyle, Benny, Unikitty, and the gang will return to movie screens around the world to delight us with more brick-based adventures in The LEGO Movie 2: The Second Part. A solid amount of LEGO Movie 2 building sets have already been released, but those are just the first salvo in a year-long deluge of wild and wacky sets from the film.

Case in point, the massive new set based on Rex Dangervest's (a new character to the series) ginormous spaceship announced at London Toy Fair earlier this week.

Announced at London Toy Fair (and spotted by BrickFanatics), the Rexcelsior set will be a 1,820-piece set that faithfully captures the "bro-fist" excellence of the gigantic blue ship. One of Rex Dangervest's ships has already been released as part of the initial wave of LEGO Movie 2 sets, though the already-released Rexsplorer is a much, much smaller vessel than the Rexcelsior. You can actually see the Rexsplorer in "scale" with the Rexcelsior in the photo above as one of those little blue and green creations to the far left. Like a number of LEGO's larger-than-life sets, this one comes with micro figures to work in scale with the Rexcelsior, as well as two minifigs of Rex and Emmet (with drawn-on stubble).

We'll likely learn more about when and where to expect the Rexcelsior in a few weeks at the North American Toy Fair, but we do know this set is coming in the summer and will retail for ~$150.

Interestingly, the whole ship can be picked up and used as a play weapon, too. The set comes with six missiles to fire from a spring-loaded launcher. Whatever other secrets the set holds will remain hidden until we can get a better look at the full set as its release draws closer. 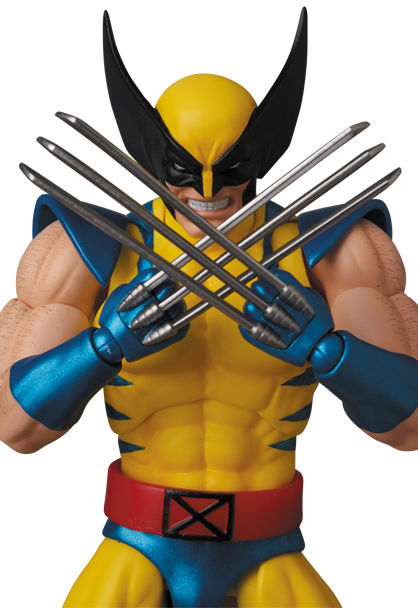 What can we say about this new MAFEX Wolverine announced by Medicom other than it's simply spectacular?

For a long time, Medicom has been pumping out incredible figures for some of our favorite comic heroes, but this Wolverine may be the pinnacle of what the company's been able to accomplish with its licensed works. The sculpt is phenomenal and captures Logan in his iconic tiger stripe suit quite well. There's also plenty of articulation in there to get him in some dynamic attack poses typically only possible in a comic. The paint app also does a nice job separating the matte look of the costume's base, while giving the blue elements a slightly shiny look to make them pop a bit more.

There are multiple heads, including an unmasked one with that wild hair, and a number of different hands/claws featured as well. A posing stand will be included too, giving you even more options when it comes to displaying this fine piece of action figure engineering.

There's no release date or North American pre-orders up just yet, but you should expect the figure to cost ~$80 whenever import sites do offer it to fans.

The Batman Black and White statue line has been one of DC Collectibles' signature lines for the past decade. Giving various artists a chance to interpret Batman (and his closest allies and foes) in a one-off piece has shown just how creative a number of artists can be when given free rein on one of the most legendary heroes to ever appear on the printed page. For the first time in the line's history, Image co-founder and head of Top Cow Marc Silvestri was tapped to bring his take on the Dark Knight to life, and the result is a somber, powerful look at Gotham's vigilante.

Silvestri's art has evolved quite a bit from his days on The Darkness, let alone his early work on Uncanny X-Men, and it has a much rougher, textured quality to it than it once did. You can get a great sense of just how much sketchy detail he incorporated into his design throughout the folds of Batman's cape. Whoever sculpted it did a fantastic job bringing Silvestri's art to life in 3D form, as it's not exactly an easy style to replicate or capture. The end result is a finely detailed piece that captures the solemn detective pondering his next move in the fight against crime in his city.

The Marc Silvestri Batman Black and White statue is due out this September and will retail for $80.