Indie Comics Spotlight: Shawn Martinbrough on thieves, Morlocks, and the Star Wars lunch box that started it all

In a recent TED Talk, artist Shawn Martinbrough admitted that it was Star Wars that got him into drawing as a kid. His hand-drawn rendering of his X-Wing fighter lunch box so impressed his parents that they enrolled him in a local painting course. As a teen, he attended New York City's LaGuardia High School for the Performing Arts (that's the Fame school, by the way) to hone his craft. And in his junior year at SVA, he got an opportunity that most aspiring comic book artists only dream of: he went to New York Comic Con, showed his work to a Marvel editor... and got hired.

Martinbrough's distinctive noir style can be found in Marvel's X-Men, Black Panther, and Luke Cage; DC's Green Arrow and Batman; as well as Shadowman (Valiant) and Hellboy (Dark Horse). But the Bronx-born artist's claim to fame has been his longtime run on Robert Kirkman's Thief of Thieves on his Skybound imprint with Image Comics. The successful series has a game and live action show in the works.

SYFY WIRE caught up with Martinbrough and asked him about how he developed such a distinctive style, who his influences are, and what it's like to see some of the characters he's created over the years on the small screen. 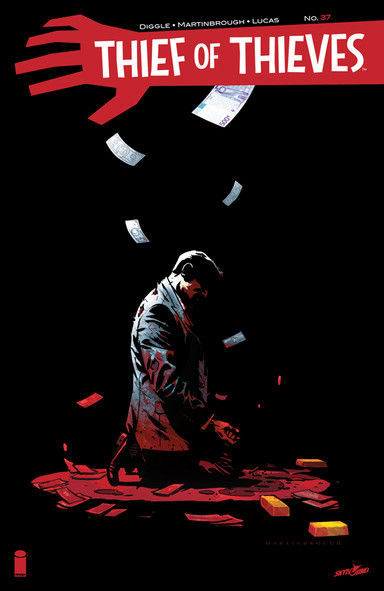 Where do you find inspiration?

Everywhere. Of course, I regularly draw inspiration from fellow artists in various fields but sometimes I'll just be inspired by a crack in the sidewalk or an abandoned building. Imperfections can be quite fascinating. With regard to comic book storytelling, I'm always fascinated by how other artists solve visual problems.

What artists have influenced your work over the years?

There's just so many. I'm always amazed by the work of the Hanuka Bros (Tomer and Asaf). Tonci Zonjic is another. Kim Jung Gi is a beast. I love the work of political cartoonist Ann Telnaes. I'm two seconds from hiring goons to go over to Chris Samnee's house and break his arm. He's on fire. Ditto Dan Panosian and Rafael Albuquerque. I'm really digging the work of costume concept artist Phillip Boute, Jr., and anything Ron Wimberly puts out, I inhale. There are so many more I could name.

What drew you to the noir style?

As a comic fan, I love many artists with completely different styles. When I was finding my style, artists who used shadows to create strong contrast began to stand out to me. Artists like Bill Sienkiewicz, Frank Miller, David Mazzucchelli, Alex Toth, and Mike Mignola, to name a few, really seemed to be doing something unique.

You've mentioned that Marvel gave you your big break, but then you moved on to Milestone?

Marvel hired me for my first job in comics. Back in the early '90s, Marvels was hiring artists to do painted illustrations and short stories for their Hellraiser line, which was published under their EPIC imprint. I did a few Hellraiser pin-ups and a short story. Alex Ross did a short story or two and then did Marvels, which blew up. Marvel tried to follow up on that success by putting out subsequent painted books in the Marvels style.

Funny story. I was offered two scripts, one written by Peter David and the other by Mike Baron. Peter David was really in demand at the time but I was such a fan of Baron's writing on Nexus that I chose his script which was Tales of the Marvels: Blockbuster. While I was working at Marvel, Milestone was starting up ten minutes away. I knew two of its founders, Michael Davis and Denys Cowan, so I would visit and hang out. One day, they asked if I would be interested in taking over inking John Paul Leon on Static. I loved John's art and said sure. We ended up working together on various projects such as Shadow Cabinet (Milestone), The Further Adventures of Cyclops and Phoenix (Marvel), Logan (Marvel), and Challengers of the Unknown (DC).

You made history working on Detective Comics. Can you tell us about that?

After inking JPL for years, I really wanted to get back to drawing. I worked on Night Force and The Creeper for DC Comics. The later project was such a blast. The legendary Sal Buscema was my inker (which is crazy). We lived about 30 minutes from each other so when deadlines got tight, I would drive over to his place and drop off art. We would have these great political debates. Such a good guy.

Anyway, the Batman office offered me a one-shot story called Batman: The Hill. It was written by Christopher Priest and that led to offering me the regular gig of drawing Detective Comics. Working with writer Greg Rucka was an amazing experience. Co-creating new characters and sections of Gotham City was a blast. It took me a minute to realize that I was the first Black artist to ever draw the series on a monthly basis. These things matter.

You got a chance to work on Hellboy with Mike Mignola. What was it like working with him?

When Mike approached me about drawing Hellboy and actually asked me what type of story I wanted to draw, I was floored. As I mentioned earlier, Mike has been a major influence on my work from early on. It was fun to draw his iconic character but he's not an easy character to draw. In addition to Mignola, I really vibed on artist Duncan Fredgredo's take on the Big Red Guy.

You also worked on The Morlocks with Geoff Johns?

Geoff and I worked on the Morlocks back in 2002. I think it was one of his first gigs. We still love that four issue mini-series. A story about a diverse group of mutants living underground and being chased by Sentinels in Chicago? It would make for a great live-action series in 2019.

How did it feel seeing Shatter, the Morlock that you helped create as a real-life character on The Gifted?

That was really cool and I think actor Jermaine Rivers did a great job portraying the character. Also, kudos to the makeup team. It's funny how something you co-created years ago can suddenly get a new life.

You've been drawing Thief of Thieves for over five years now. How did you get involved with Robert Kirkman?

Kirkman reached out, said he was a fan and asked if I would be interested in working on a non-zombie related project. I accepted the mission.

Tell us about The Good Fight and how you got involved with that project.

The co-creator of The Good Fight project, Michael Perlman, reached out and asked me to contribute an illustration. It was a great and timely concept so I submitted a previously unpublished piece I had done for The New York Times. It worked perfectly theme-wise and they loved it.

I plan to write more in 2019 but first I'll be wrapping the final arc of Thief of Thieves. I'm working hard to give our fans a visually rich ending to our story. Looking forward to working with my former Thief of Thieves writer Andy Diggle, Jock, editor Will Dennis and the great folks over at Comixology and Delcourt on a prequel story to the acclaimed French graphic novel series, Prométhée 3:13. Illustrating covers for the Meyer mini-series for Humanoids, working on a thing or two for DC Comics and two very interesting projects I can't talk about yet. Stay tuned!