With so much going on in Avengers: Endgame, it's easy to miss the dozens of payoffs in the final chapter of the MCU saga. Screenwriters Christopher Markus and Stephen McFeely jam-packed their script with nods and Easter eggs from 22 movies and two spin-off TV shows, leaving some fans busy dissecting scenes a week after its release. Simply put, the best part of Avengers: Endgame could be the payoff for fans who have gobbled up everything from Marvel Studios over the span of 10 years.

One of those major moments, rife with meaning for both Steve Rogers and Tony Stark, comes during the "Time Heist" in the second act. When the heroes travel to New York 2012, things go bad and Loki ends up stealing the Tesseract. Things look dire until Tony thinks of a place in the past where both the Tesseract and more Pym Particles, which they desperately need to do more time traveling, should exist.

But why, where, and when exactly do Tony and Steve go after plans for the heist go awry? Let's dive in.

When Tony and Steve arrive back in 1970 at Camp Lehigh, it looks different than every other time we've seen it in previous movies. The site, taken from the comic books, plays a pivotal role in several MCU films starting with Captain America: The First Avenger. That film gives us the best look at the secretive U.S. Military camp where Steve Rogers trains, Captain America is born, and S.H.I.E.L.D. is later founded.

From early on in the MCU, Howard Stark has played a major role, laying the building blocks for S.H.I.E.L.D. From working alongside Peggy Carter in Captain America: The First Avenger to working with Hank Pym in Ant-Man to his work with the Tesseract, he's been a mainstay. In Iron Man 2, we learned (through Howard's notebooks) that he had vigorously studied the Tesseract, having found it while searching for a frozen Steve Rogers in the post-credits sequence of Captain America: The First Avenger.

Now to Tony. There are multiple mentions of Howard Stark's admiration for Steve Rogers in the MCU. From his debut in the Captain America: The First Avenger to Marvel's The Avengers in 2012 to episodes of Agent Carter, Howard has made it clear that he not only respects Captain America, he believes in him. And maybe that's what rubs Tony the wrong way about the Captain; he's the favorite son.

In The Avengers, while working on tracking the Tesseract, Tony laments to Bruce Banner, "That's the guy my dad never shut up about? Wondering if they shouldn't have kept him on ice."

The point is, Tony is a genius and likely knows (post-Avengers and especially post-Winter Soldier) most everything there is to know about Captain America and S.H.I.E.L.D. He knows that the Tesseract, after being found by his father, is likely at Camp Lehigh. Additionally, he's aware of Hank Pym's work and the Pym Particles as of Captain America: Civil War and Ant-Man. 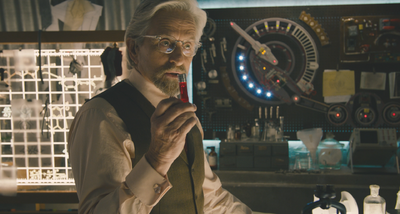 In Ant-Man, we learn that Hank Pym, who has loose ties to S.H.I.E.L.D., has created the Pym Particle, allowing himself to shrink in size. But the real back story between Hank and Howard can be found in the Ant-Man Prelude, a two-issue comic mini-series set in the Marvel Cinematic Universe.

In that flashback story, it's revealed that Pym and Stark go way back, beyond the hint that they've worked together in Ant-Man. Prelude shows off their spy work as they try to stop a group of Russian radicals from successfully reverse-engineering Hydra technology.

So, how does Tony know when exactly to go back in time?

It's an educated guess. He knows where S.H.I.E.L.D. would most likely hide their biggest secret: Camp Lehigh. He knows that S.H.I.E.L.D., along with his father, has been experimenting with and studying the Tesseract since they found it in the 1940s. He also knows that Pym would have been working with S.H.I.E.L.D. from the time the Pym Particles were created in the 1960s to the time Pym left the organization in 1989, after his wife's apparent death.

When Cap and Tony arrive in 1970, the year Tony was born, we get to finally see Tony and Howard have that father and son moment. We also see the culmination of what was hinted at in Captain America: The Winter Soldier and Agent Carter in that Peggy has now become Director of S.H.I.E.L.D. We also get another look at James D'arcy, who played Jarvis in Agent Carter and cameos as Howard Stark's driver.

In addition to furthering the story and providing closure, Tony and Cap's jump back to 1970 also foreshadows the end of the film. Both heroes have grown by this point, they've realized they've become different people, and the trip back to the past (Tony connecting with his father, Cap realizing what he's lost) provides a chance for each to prepare for the future.

Inside 'America's Ass': How that Captain America joke in Avengers: Endgame happened