I’ve been enjoying Loki immensely, not just because Tom Hiddleston, Sophia Di Martino, and the entire cast are so entertaining, but because the show seems to have adopted its title character’s "agent of chaos" persona and choosing to wreak playful havoc across the Marvel Cinematic Universe.

Episode 5 was the best yet, with the Loki Squad full of glorious purpose and awesomely random sightings in the Void at the end of time in which Loki was banished after being pruned. Among the comics-related treasures hidden in the episode? A version of Mjolnir buried in the dirt above the Lokis' hideout and a jar marked T365 with what has to be "Throg," the cutest Thor variant of all time.

T365 is a nod to Thor #365, the comic in which Frog Thor debuted. Even the title of the episode, "Journey Into Mystery," the name of the original Marvel Comics series in which Loki and Thor debuted, was another playful bit of fan service in an episode bursting with geek-out worthy moments (Loki first appeared in Journey into Mystery #85). Throg would be a strong contender for the MCU's all-time best Easter egg... if not for another element spotted just a few minutes earlier.

Let's face it. Nothing, NOTHING could top the brief but unmistakable cameo by the most notorious vehicle in the history of Marvel Comics, the Thanos Copter.

The Thanos Copter is one of the weirdest anomalies in comics history and the fact that it is now MCU canon is really something to celebrate. If you don’t know about the Thanos Copter, it's exactly what the name implies: a helicopter used by the Mad Titan, Thanos. I’m sure some of you continuity sticklers are ready to grumble about why the hell Thanos, one of the most powerful beings in the universe, the man who once possessed the Infinity Gauntlet, would ever need a chopper to get around town. I will kindly ask you to sit down and keep it to yourself, because I will not let you ruin the fun for the rest of us. 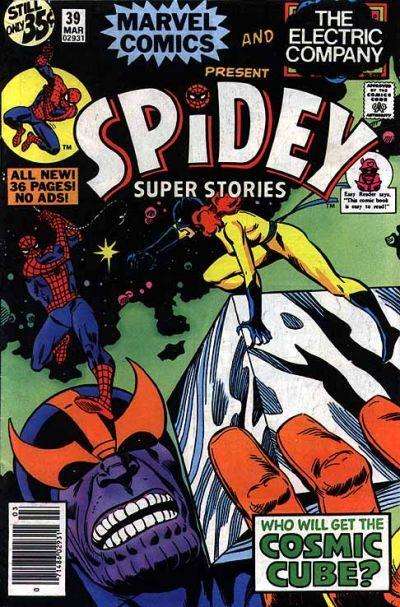 The infamous helicopter appeared back in 1979, in Spidey Super Stories #39. That series was designed for young readers and was carefully vetted for age-appropriate storytelling and themes. But, because it was Marvel, they wanted to introduce different heroes and villains to young readers, so despite the fact the series was aimed at small children, Marvel baddies like Doctor Doom, the Green Goblin, the Kingpin, and yes, Thanos were recruited to battle Spider-Man and his monthly super-ally.

The Thanos issue revolved around (what else?) the Cosmic Cube. I’m not going to bother to break down the plot, because that’s not important. What is essential is knowing that at some point, the dude who would go on to be the most dangerous threat in the universe hopped in a helicopter WITH HIS NAME ON THE TAIL BOOM OF THE CHOPPER, in search of a cube full of magic.

It should be noted that the Thanos copter isn’t even the craziest moment in the story. That came on the final page. After Spidey and the Hellcat defeat the Mad Titan, the cops take Thanos away — in handcuffs. In the immortal words of Avengers: Endgame co-star Matthew Berry, "you heard me!"

The man who beat Thor and the Hulk singlehandedly in Avengers: Infinity War was taken downtown by the NYPD. Spidey Super Stories was truly a masterpiece crafted in pencil, ink, and madness.

Over the years, the Thanos Copter has morphed from an object of ridicule for some fans who take their comic books a bit too seriously, into an almost-legendary bit of campy nostalgia from an altogether different and less complicated era of comics. Nostalgia being what it is, Mattel even released a Hot Wheels Thanos Helicopter as a San Diego Comic-Con exclusive in 2018. 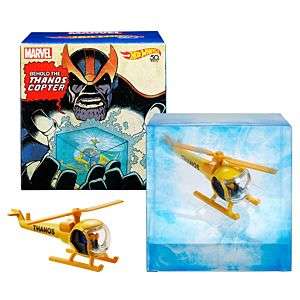 No doubt, the eBay market for that collectible will skyrocket now that the copter is officially part of Marvel movie canon. Random moments like this — fan service in the very best way, designed simply to overwhelm the Internet with Geek joy — are part of why fans are so passionately invested in the MCU. I’m betting the majority of fans watching Loki never read that 42-year-old comic where Thanos’ dual-blade ride made its only appearance. Doesn’t matter. They could enjoy that brief moment just the same as those of us who once scratched our heads over the image of one of the all-time great villains flying around Manhattan in a personalized chopper.

It's the greatest Easter egg in Marvel movie history, in part because NO ONE could have predicted it. Throg is awesome, sure, but there already has been talk that he might show up in Thor: Love and Thunder. Seeing him in Loki was cool, but not a huge shock. Thanos' coolest mode of transportation? Now that was a stone-cold stunner.

Was it necessary for the story? Not in the slightest. But the fact that it was there made this comic book nerd smile ear-to-ear and reminded me of just how incredibly fortunate we are to be living at a time when something as profoundly ridiculous as the Thanos Copter actually has a chance of showing up in a Marvel Studios production.

I’ve been trying to think of what could possibly top it, and I’m at a loss. I just don’t see how Kevin Feige and Co. can top this one. After all, there is simply no chance the Spider-Mobile will ever show up... is there?

What do you think is the best Easter egg the MCU's ever had ? Find me on Twitter/Instagram and let me know.