Although obviously somewhat better known for its superhero fare, DC as a company has been known to dabble in other genres, and has helped facilitate some groundbreaking works through horror, romance, and fantasy from time to time. Amethyst is one of those odd characters owned by DC that doesn’t seem to fit strongly in the world of superheroes, but most of her more recent appearances have been alongside them rather than in her own stories. Yet Amethyst certainly got her start in her own solo series which has been seldom referenced or recollected, thus generally adding an air of confusion as to who she even is when she pops up in mainstream superhero crossovers like Infinite Crisis.

The solo title in question, Amethyst: Princess of Gemworld, is one of the better series of the early ‘80s. Created and co-written by Dan Mishkin and Gary Cohn with art and designs by Ernie Colon, it hit the stands in 1983. In fact, Amethyst predates other “magical girl” franchises like She-Ra: Princess of Power by a couple years, putting it ahead of the curve. This series might be mostly forgotten, but it was a trailblazer for more reasons than one.

The first story arc follows along with its protagonist Amy Wilson, a 13-year-old girl living in the suburbs. Amy discovers a gem in a box and puts it on. It turns out that what she had initially assumed to be a gift from her parents was indeed an artifact of Gemworld, which allowed her to pass between it and Earth. She discovers that time passes differently in Gemworld, so she changes from a teenager to a woman in her early 20s when she goes there. She’s immediately attacked, and then saved by a man named Granch, who we later discover is the grudging son of the villain, Dark Opal. He delivers Amy to the witch Citrina.

Citrina tells Amy that the people she thinks are her real parents are in fact not, and she herself had delivered her to Earth in order to save her from the evil Dark Opal. Amy’s birth parents were rulers of Gemworld, beautiful and well-loved by the people until the villainous Dark Opal killed them and stole the throne. Naturally, most of the story takes place on Gemworld, which we even get a map for in the comics. Gemworld is flat and shaped like a skull.

Dark Opal had many children over the years who he banished for failing to live up to his expectations. Carnelian is his only physically attractive child by virtue of being adopted, and thus the only one the despot will acknowledge, despite his inability to perform spells like the rest of the denizens of Gemworld can. Granch attempts to find his brothers and sisters in order to urge them to rebel against their father. It doesn’t go great, and eventually, he is killed by his own father. Amy continues the good fight and eventually destroys Dark Opal with assistance from her new Gemworld friends and allies, who beg her to stay and rule.

Amy Is A Rebel

Amy wants nothing to do with it and begs to be returned home. One of the most defining traits in Amy’s character besides her willingness to help Gemworld is her steadfast unwillingness to remain there. Even as Prince Topaz insists he’s in love with her and Lady Turquoise pledges her undying allegiance to Amy, she refuses them and insists on returning home to her parents and her life on Earth. Prince Topaz is heartbroken, but not for long, as he and Turquoise marry in the second series after a particularly low-stakes love triangle fails to pan out when Amy just grows impatient and frustrated, calls everyone fakes, and leaves.

One of the best characters in the original Amethyst series is Taffy, Amy’s labrador that ends up following her to the Gemworld and becoming lost. Immediately confused as a spy and a villain by Amy’s allies, Taffy searches for Amy, almost immediately encountering a pack of evil hounds. Taffy attacks and kills the leader of the pack, and the rest of them give Taffy distance after that. When the pup finally sees Amy being molested by Carnelian, Taffy leaps right at “The Red Prince” and knocks him down. When Carnelian retaliates, Amethyst loses her patience and puts him in his place. The next story arc, Taffy has almost no role and then seems to more or less disappear. Here’s to you, Taffy; you were a very good pup and the series was better with you in it.

The second Amethyst series, intended as an ongoing, went slightly more off the rails. The art team changed regularly, and although it featured incredible guest artists like Ric Estrada, Colleen Doran, Dan Jurgens, and Karl Kesel, the intricate layouts of Colon’s work had established much of the visual style of the book and the series suffered without them. Despite that, the fill-in artists really were great. The original writers were gone by the eleventh issue, and up until #16, Keith Giffen and Mindy Newell teamed up on plotting chores with Newell scripting.

Giffen went on to play a large role in DC. While the name Mindy Newell might not ring an immediate bell for most modern readers, she likewise had a highly interesting career in comics and is generally acknowledged as the first female writer of Wonder Woman. Newell did a lot of deeply interesting stuff for DC from the mid-’80s to the early ‘90s before seemingly vanishing from the field although she has returned to it as a columnist from time to time. When her name pops up in retrospect, it can generally be accepted that the tale will be dark bordering on horror and character-driven in a way few comics were in the mid-’80s, and her work on Amethyst is no different. She and Giffen returned with a follow-up mini-series that went full-out metaphysical with Amethyst, and it was incredible. 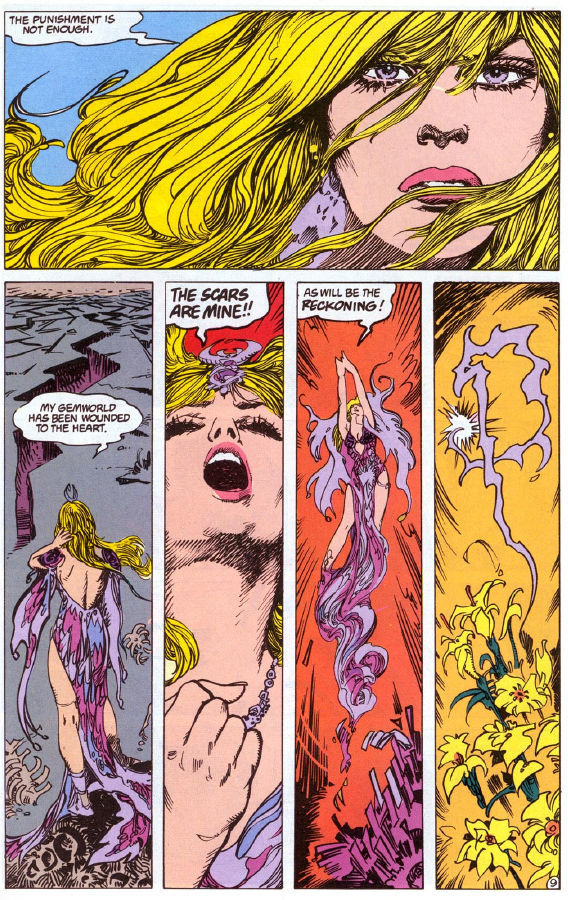 Rebooted and Returned to Continuity

In the New 52 revamp of the ‘70s fantasy anthology Sword of Sorcery, Amethyst returned, this time scripted by industry legend Christy Marx. Longtime fans of genre will be familiar with Marx’s work on cartoons like Jem and the Holograms as well as regularly crossing over into the world of comics scripting. This series was short-lived, but interesting, and changed many of the key elements of the original story. Amy is an outcast who lives with her single mother in a trailer at the edge of town, not knowing her true destiny awaits her in her mother’s home dimension Gemworld. Together, they travel back to defeat the woman that caused her father’s death. Although this series was brief, Amethyst went on to make appearances in Justice League Dark, the magic-based Justice League series.

Despite an overall lack of recognition for how really interesting and genre-bending Amethyst was as well as its intrinsic appeal to a broader audience outside of regular comics fans, this is a character that has yet to vanish entirely, a fact which may offer some hope to her longtime fans. DC Universe recently did a seven-episode animated series of one-to-two-minute clips dedicated to Amethyst that reimagined her as a gamer that gets sucked into her favorite game. It has been announced that she will be one of the featured characters on the 2019 season of the Young Justice cartoon.

Over its several series, this is a comic that really has never gotten the credit it deserved. Generally found in the quarter bins at comic shops and discarded by most collectors of the time as a girl’s comic, the powerful femininity of the Amethyst series was actually groundbreaking for comics, a medium whose struggles with appropriate female representation has spanned decades and been the subject of endless well-earned criticism. Amethyst stands uniquely apart from that legacy and deserves every bit of the recognition it receives.

It's a fan thing
Join SYFY Insider to get access to exclusive videos and interviews, breaking news, sweepstakes, and more!
Sign Up for Free
All Posts About
Comics
Fangrrls
DC Comics
She-Ra
opinion
Related Stories

Marvel stories to cry over after watching Avengers: Endgame

Oldest known use of narcotic opium discovered in ancient pots