There’s a weird blob of something in the moon’s innards, and even scientists are not completely sure how it got there.

On the far side of the moon, buried almost two hundred miles under the South Pole-Aitken basin (the largest preserved crater in our solar system), is a mysterious mass. Peter B. James and his team of scientists from Baylor University believe it could be the metal core of an asteroid that head-butted the moon and left that 1,242-mile-wide crater behind.

“Imagine taking a pile of metal five times larger than the Big Island of Hawaii and burying it underground. That’s roughly how much unexpected mass we detected,” said James, a professor of planetary geophysics who recently published a study in Geophysical Research Letters.

Whatever this thing is, it’s dense enough to make the crater floor sink over half a mile. James and his team analyzed gravitational changes around the moon using NASA data from its GRAIL (Gravity Recovery and Interior Laboratory) mission and Lunar Reconnaissance Orbiter (LRO). It was that data that revealed there was something lurking deep beneath the crater. 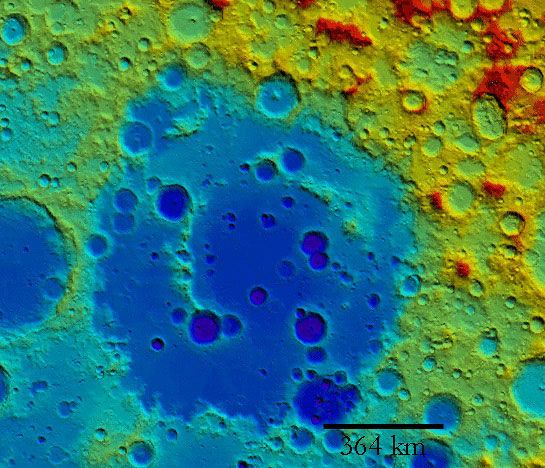 It’s most likely that a violent encounter with an asteroid is what left the moon with a foreign object in its guts. From the data, the team theorized it could be the iron-nickel core of an asteroid that lodged itself deep in the upper mantle of the moon, which is that intermediary layer between the crust and core. Computer simulations of massive asteroid impacts back this up.

“We did the math and showed that a sufficiently dispersed core of the asteroid that made the impact remain suspended in the moon’s mantle until the present day, rather than sinking to the moon’s core,” said James.

Another possibility is that the mass formed when the moon was still erupting with volcanoes, and if it’s not the core of an asteroid then it’s an enormous lump of oxides — from magma that was belched out before lunar volcanic activity went dormant forever — and has hardened over 4 billion years.

Whatever the mass really is, James thinks the South Pole-Aiken basin is “one of the best natural laboratories for studying catastrophic impact events” that would go on to give birth to rocky moons and planets like our own. This crater is a well-preserved anomaly, since it is thought that all traces of even larger impacts, which happened during the time the objects in our solar system were forming, have vanished.

We might get a better idea of what the mystery mass is when we take off for the moon in 2024. If that happens.

It's a fan thing
Join SYFY Insider to get access to exclusive videos and interviews, breaking news, sweepstakes, and more!
Sign Up for Free
All Posts About
News
Science
Moon
NASA
asteroids
craters
space
Related Stories

Yes, That Picture of the Moon and the Andromeda Galaxy Is About Right