Seemingly screeching into our Milky Way neighborhood from the Star Wars universe, some of NASA's most vigilant space telescopes have captured images of a distant galaxy shaped suspiciously like Darth Vader's distinctive Imperial TIE fighter banking into an attack run against a spirited squadron of rebel X-wing pilots.

Back in 2015, NASA’s Fermi Gamma-ray Space Telescope reported that the remote galaxy TXS 0128 was a weak source of gamma rays, which are categorized as the highest-energy form of light. After observing the far-off cluster emitting intense blasts of energy produced over the last 100 years, researchers took a closer peek by employing the Very Long Baseline Array (VLBA) and NASA’s Chandra X-ray Observatory.

“After the Fermi announcement, we zoomed in a million times closer on the galaxy using the VLBA’s radio antennas and charted its shape over time,” said Matthew Lister, a professor of physics and astronomy at Purdue University. “The first time I saw the results, I immediately thought it looked like Darth Vader’s TIE fighter spacecraft from Star Wars: Episode IV - A New Hope. That was a fun surprise, but its appearance at different radio frequencies also helped us learn more about how active galaxies can change dramatically on decade time scales.”

A new study headed up by Lister and detailing the findings was published this week online at The Astrophysical Journal. 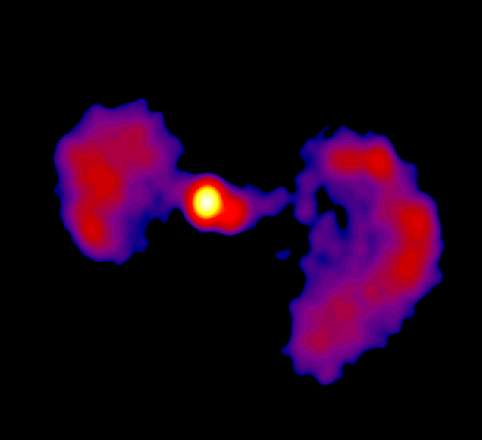 TXS 0128 exists 500 million light-years away, deep in the constellation Cassiopeia, fortified by a supermassive black hole approximately 1 billion times the Sun’s mass. It’s officially classified as an active galaxy, whose luminous energy includes extra doses of radio, X-ray, and gamma-ray light. Scientists believe these twin-lobed emissions occur in proximity to its central black hole, an area where a turbulent disk of hot gas and cosmic dust accumulates due to gravitational and frictional forces.

The galaxy’s powerful jets seem to have begun nearly 90 years ago, as witnessed from Earth, and then inexplicably halted 50 years later, leaving behind the unconnected lobes in the aftermath of activity. Then, around 10 years ago, these jets flashed on again, which produced the emission pattern seen nearer to the core. Only one-tenth of active galaxies eject twin blasts of high-energy particles, traveling at close to the speed of light in opposite directions. Observed at various radio frequencies, the familiar TIE fighter shape starts to appears at 6.6 GHz.

“The real-world universe is three-dimensional, but when we look out into space, we usually only see two dimensions,” explained co-author Professor Daniel Homan of Denison University in Granville, Ohio. “In this case, we’re lucky because the galaxy is angled in such a way, from our perspective, that the light from the farther lobe travels dozens more light-years to reach us than the light from the nearer one. This means we’re seeing the farther lobe at an earlier point in its evolution.”

Watch the expansion of the Cas A supernova remnant with your own eyes!

‘Reginald the Vampire’ gets an unlikely origin story

'Reginald the Vampire' stars break down the premiere