Many aquatic beasts of primeval Earth's evolving oceans were massive behemoths whose immense weight and ravenous appetites made them the true terrors of prehistoric waters. It took a lot of calories to move those tons of ancient flesh through rough currents and down into murky depths to hunt for unsuspecting prey, so any sort of genetic adaptation to assist in their daily sea foraging was a welcome trait, regardless of their size.

Meet Brevicaudosaurus jiyangshanensis, a new genus and species of two-foot-long, nothosauroid marine reptile that sported cool vampire-like fangs and was equipped with its own private flotation device that would have helped its bigger relatives in their daily buoyancy issues

Paleontologists at the Chinese Academy of Scientists in Beijing and Canadian Museum of Nature in Ottawa have discovered two practically complete skeletons of this small water-bound lizard that roamed the oceans of what is now modern China.

Existing 240 million years ago during the Middle Triassic, Brevicaudosaurus was a plump creature that utilized its squat, flat tail for balance and floated leisurely near the bottom of shallow waters, snagging dinner with its imposing set of sharp dagger-like teeth. Details of the discovery were published last week in the Journal of Vertebrate Paleontology.

The rare specimens were unearthed from thin layers of limestone rock in two quarries in southwest China's Fuyuan County, and were investigated by Dr. Qing-Hua Shang from the Institute of Vertebrate Paleontology and Paleoanthropology at the Chinese Academy of Sciences and his Canadian colleagues. 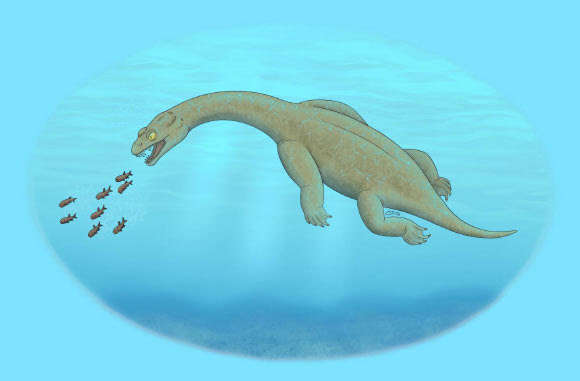 “Our analysis of two well-preserved skeletons reveals a reptile with a broad, pachyostotic body (denser boned) and a very short, flattened tail,” they concluded in the paper. “A long tail can be used to flick through the water, generating thrust, but the new species was probably better suited to hanging out near the bottom in shallow sea, using its short, flattened tail for balance, like an underwater float, allowing it to preserve energy while searching for prey.”

Paleontologists revealed another evolutionary factor that would aid Brevicaudosaurus in its below-the-surface scavenging activity, in the form of thick, long stapes, which are bar-shaped bones located in the middle ear. These attributes were employed for sound transmission, and could have vastly improved the reptile's sense of underwater hearing. 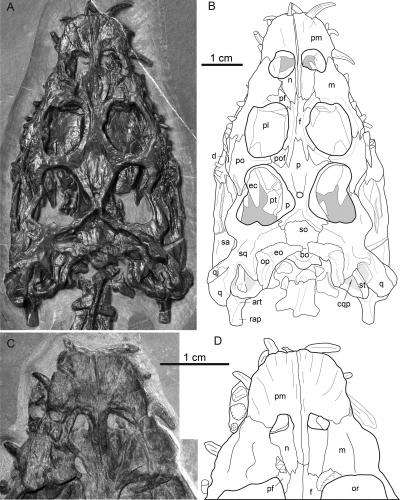 Dense bones, called pachyostosis, likely allowed it to be neutrally buoyant in shallow waters. Assisted by the flat tail, this would have helped Brevicaudosaurus to float silently underwater, expending minor energy while still staying horizontal. This neutral buoyancy might have even let the toothy predator stroll along the seabed to track down slow-moving meals.

Its highly dense ribs also indicate that the fearsome-looking reptile had a large lung capacity for prolonged survival dives, but would still need to surface for energizing gulps of oxygen inhaled through snout-mounted nostrils.

"Perhaps this small, slow-swimming marine reptile had to be vigilant for large predators as it floated in the shallows, as well as being a predator itself," said co-author Xiao-Chun Wu, a paleobiologist at the Canadian Museum of Nature.