Following the events of The Last Jedi, Poe Dameron (played by Oscar Isaac in live-action) has more than a few burned bridges to fix after his mutiny against Vice Admiral Holdo (Laura Dern) left a bunch of people dead. Resistance Reborn, an upcoming Star Wars novel from Del Rey books and author Rebecca Roanhorse, will explore Dameron's guilt over the fallout of his poor decision-making.

“Poe has royally messed stuff up … His mutiny has gotten a lot of people killed. He’s carrying a lot of that shame, a lot of the mistakes that he’s made," Roanhorse said during the Lucasfilm Publishing Group panel at NYCC today, adding that Poe will shed some of his cockier attributes from the first two movies for a more serious leadership role. "We didn’t wanna just wipe that slate clean [with him] … He’s gotta build back trust, he's gotta build his own cofidence ... And he's gotta find some forgiveness ... There’s not a lot of room in the Resistance to sit in the corner and feel sorry for yourself.”

In addition to Poe, Rey, Leia, Finn, and the rest of the crew we expect from the current trilogy, Roanhorse also incorporated brand-new characters as well as familiar ones from the video games, original trilogy, and comic books. The panel actually began with a live-reading of an excerpt from the book from Marc Thompson, narrator for many Star Wars audiobooks. To be specific, the passage finds Poe meeting with General Organa in an effort to begin rebuilding the Resistance, which was all but decimated by the end of Episode VIII. That's just one pair-up that might interest you in picking up a copy of the book when it goes on sale Tuesday, Nov. 5.

"You’re gonna have scenes between Leia and Rey that you may not get otherwise," teased Roanhorse.

"It's so cool to get inside Poe's head and really understand how wrestles with the consequences of that decision," added Thompson.

Elsewhere in the galaxy, we almost got answers to Episode IX a lot sooner with Kevin Shinick's Force Collector, an impending YA novel about a young protagonist who discovers they have Force powers. Shinick, an alum of Robot Chicken described the book as a mixture of Star Wars and Stephen King's The Dead Zone. However, he ended up doing a serious rewrite on an early draft of the book because it was too similar to what J.J. Abrams and Chris Terrio had cooked up in the Episode IX screenplay.

"When you write these things, in a lot of cases, you write them in a vacuum," he explained. We don't know what's coming. You're on a need-to-know basis. So you're writing this thing, you're sweating, you hand it in, you're like, 'Great, I did it.' And then, right before the holidays, they called me and said, 'We have a problem we didn't foresse happening.' I said, 'What [is it]?' They said, 'Somehow, you inadvertantly wrote a big section of Episode 9.' I was like, 'Well, clearly, you've got me on the wrong gig!' We all laughed and then the said, 'Now you have to go rewrite it.' Let's just say we pulled back a lot, but there is enough to the journey of Episode 9." 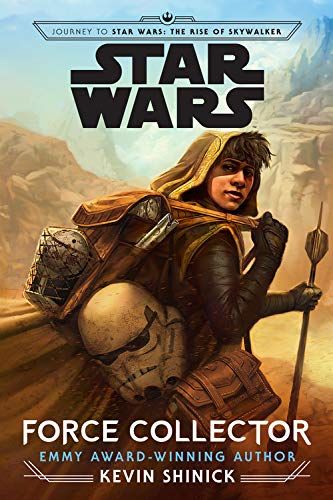 Resistance Reborn and Force Collector (on sale Nov. 19) are just two projects that fall under Lucasfilm's "Journey to Star Wars: The Rise of Skywalker" storytelling initiative that fills in the gaps of what happened between the end of Last Jedi and the start of Rise of Skywalker. Deliah S. Dawson's Galaxy's Edge novel (out now) is also a part of the program, as is Justina Ireland's Spark of the Resistance (out now) and Ethan Sacks' Star Wars: Galaxy’s Edge: Allegiance comic for Marvel (Issue #1 arrives Oct. 9).

It's a fan thing
Join SYFY Insider to get access to exclusive videos and interviews, breaking news, sweepstakes, and more!
Sign Up for Free
All Posts About
Movies
News
CONS
NYCC 2019
New York Comic Con 2019
Star Wars
Star Wars: Episode IX - The Rise of Skywalker
books
You May Also Like
Recommended by Zergnet
Latest on SYFY WIRE