Entering the record books as the second-largest animal egg ever found on Earth, paleontologists at Chile's National Museum of Natural History and the University of Texas at Austin have identified a giant fossilized egg belonging to an extinct marine reptile that once swam the waters of Antarctica some 66-68 million years ago.

The super-sized Cretaceous fossil, first discovered back in Antarctica in 2011 by Chilean scientist David Rubilar-Rogers and his colleagues, was originally nicknamed "The Thing" due to its strange, deflated-football appearance. Now this rare relic has been officially named Antarcticoolithus bradyi and represents the first fossilized egg unearthed in Antarctica.

Paleontologist Julia Clarke of the University of Texas at Austin initially observed the bizarre fossil back in 2018 while visiting Rubilar-Rogers at the National History Museum in Chile, where she rapidly deduced that the object was indeed an ancient egg measuring 11.4 by 7.9 inches and weighing 14.33 pounds.

"It was weird enough that they decided to collect it, even though it wasn't clear what it was. It definitely wasn't bone, but it was strikingly unusual," explained Clarke. "Many turtles, snakes and lizards lay eggs with soft, flexible shells. The Thing is the largest soft-shelled egg ever, by a long shot."

Excavated in nearshore marine deposits in Antarctica, this unique specimen vastly exceeds the size of eggs belonging to all known non-avian dinosaurs in volume and is significantly different in structure, lacking a prismatic layer and any distinct pores. Only the egg of Madagascar's extinct elephant bird is marginally larger, yet is also five times thicker.

These findings, published this week in the online scientific journal Nature, greatly extend the limits of just how large paleontologists theorized that these soft-shell eggs could grow. The oblong fossil is also of far-reaching importance because scientists have concluded that it was laid by an extinct, giant marine reptile knowns as a mosasaur, which flies in the face of evidence that these sea creature didn't lay eggs.

"It is from an animal the size of a large dinosaur, but it is completely unlike a dinosaur egg," said lead author Lucas Legendre, a postdoctoral researcher at UT Austin’s Jackson School of Geosciences. "It is most similar to the eggs of lizards and snakes, but it is from a truly giant relative of these animals."

All Cretaceous Period mosasaurs had similar body styles, with heavily muscled cylindrical bodies, elongated jaws, and a powerful tail for swift propulsion. Its agile limbs had evolved over the ages into efficient paddles used for maneuvering around the primeval seaways looking for prey.

Legendre employed an array of microscopes to study samples of "The Thing," where he identified multiple layers of membrane that confirmed that this unusual fossil was absolutely an egg. Its structure was found to be most similar to transparent, fast-hatching eggs produced by many modern snakes and lizards. But due to its contents containing no actual skeletal evidence, Legendre and his team had to construct a theory as to which prehistoric reptile deposited it.

Researchers formulated a set of data comparing the body sizes of 259 living reptiles with their eggs, and learned that this ancient marine reptile would have easily measured in at over 20 feet long from tip to body end. Further solidifying their position, the rock formations where the celebrity egg was first discovered is also a known repository of both baby and adult mosasaur and plesiosaur skeletons.

"Many authors have hypothesized that this was sort of a nursery site with shallow protected water, a cove environment where the young ones would have had a quiet setting to grow up," Legendre said. 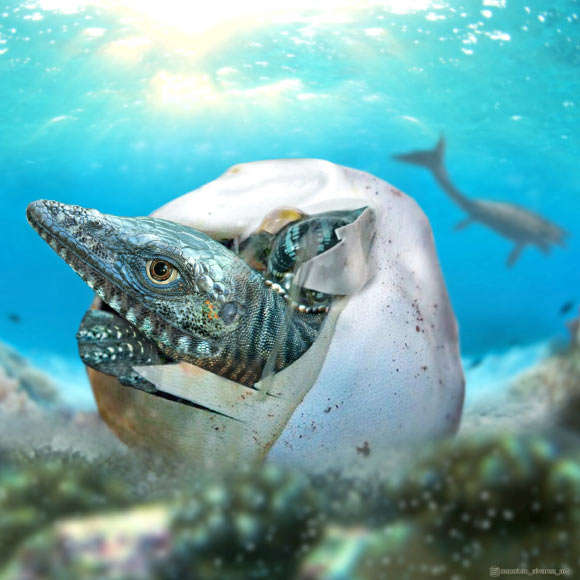 Exactly how this pregnant mosasaur eventually gave birth and laid the egg is still under debate. Scientists have proposed that perhaps it involved a process by which the egg hatches in the open water, in keeping with the methods used by modern sea snakes. Another speculates that the birthing event had the massive reptile dropping eggs on a sheltered beach, with the little monsters crawling into the sea like infant sea turtles.

However, researchers are quick to point out that this would be a difficult endeavor since mama mosasaur would have been far too heavy to navigate their immense weight on dry land.

"We can’t exclude the idea that they shoved their tail end up on shore because nothing like this has ever been discovered," Clarke noted.