It's been over a week since San Diego Comic-Con 2019 rocked the nerd world with its latest releases, surprises, and cosplay. The biggest moments came from a select number of panels and off-sites, inspiring a whole new slew of art and fic, as well as a resurgence in some old favorites. Here's how to celebrate what came out of comic-con, fanfiction style.

"If I Knew Then What I Know Now" by whatUseeintheshadows

Supernatural's final Hall H panel was a tearjerker, and by tearjerker, we mean everyone was crying. Fans were crying, the cast was crying, probably you were crying. If you'd like to cry some more, read this AU wherein Dean Winchester finds himself back in 1983 as a child and has the chance to change his family's entire destiny. Experience Supernatural all over again before it's over for good.

"you belong among the wildflowers" by wearealltalesintheend

The pilot for the upcoming Batwoman series was screened at SDCC this year, giving us a look at Ruby Rose's turn at the title character of Kate Kane. While the pilot will only give us a small look at what the series overall will be like, perhaps this fic will expand on what to expect. Maybe. Or it'll just be a fun read. That's okay too.

The Steven Universe: The Movie panel was one of the fan favorites this year, with lots of hints dropped about the upcoming feature about the continuing adventures of the Crystal Gems. There are, of course, multiple theories. Many of those can be found in this wonderful story that reads as if it were an official novelization of the show.

All of the latest season of Veronica Mars was dropped by surprise during their Comic-Con panel, much to the celebration of fans. If you've already binged the season, you may be interested in this take on the finale. If you haven't ... you'd better wait to read this. Spoilers abound. 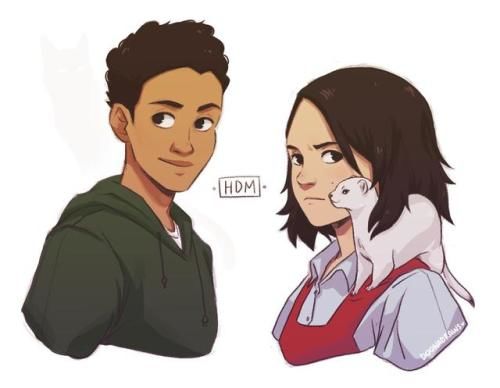 "(Un)settled: An overview of atypical patterns of daemon morphic fluidity" by LectorEl

Fanfiction takes many forms. Sometimes it's a drabble, sometimes it's an epic long-fic that is over 500,000 words. And sometimes it's a fake academic paper with fake citations all established in the world. In honor of a closer look at HBO's version of His Dark Materials, tap into the academic side of daemons with this in-world undergraduate paper.

We shall forever be thankful to Scarlett Johansson for not leaving Natasha Romanoff with Avengers: Endgame and instead giving us the prequel we've all been waiting for: Black Widow. Learning how the Russian dancer-turned-spy came to be is bound to be amazing. This fic takes a look at one such instance when Nat has a target on her back.

Thor is going to play with the Guardians of the Galaxy and Jane Foster is going to be picking up Mjolnir in Taika Waititi's upcoming Thor: Love and Thunder, the fourth movie in the MCU's Thor series. Before that happens, this story takes a moment to visit the farewell between these once lovers, each now catapulting on their own paths of discovery and greatness.

"In the Still of the Night" by BlueLonghand

When we left Riverdale at the end of Season 3, things weren't looking so good for Jughead. Now, with a sneak peek at Season 4 thanks to Comic-Con, we're still very worried. If you'd like to alleviate your fears a little and escape, take a Bughead journey from the beginning. Chances are you'll feel a little more prepared for the next season ... prepared to be devastated, probably.

The 13 best TV shows based on movies