Remember the "Don't Touch The Hammerpede!" scene in director Ridley Scott's 2012 movie, Prometheus? When mission biologist Millburn foolishly strokes a flaring extraterrestrial serpent rising out a pool of ooze, only for the hostile creature to wrap itself around his arm like a mutant cobra?

Well, a similar (and infinitely less deadly) application of the same mechanics can be seen in Earth's flora and fauna via coiling snakes, the arms of an octopus, an elephant's truck, and even pole beans climbing up a garden trellis. It's this latter plant that has inspired scientists at the University of Georgia School of Engineering to create a new style of soft robot gripper that can twist around objects to grasp them.

Pole beans and similar twining plants reach out with touch-sensitive shoots to curl themselves around support structures like strings, ropes, rods, and sticks to allow themselves to grow skyward. UGA's spiraling robot tool has been created to mimic these exact sorts of worm-like tactics to gently grasp objects as tiny as 1 millimeter in diameter.

"We had tried different designs but we were not happy with the results, then I recalled the pole beans I grew in our garden few years ago," explained associate professor and the study's lead author Mable Fok. "This plant can hold onto other plants or rope so tightly. So, I did some research on twining plants and thought it was a good design from nature for us to explore."

Their findings were recently published in the online journal Optics Express, where researchers provided details concerning their new robotic spiral gripper and the advantages it displays when compared to existing devices of the same sort, like an embedded sensor delivering real-time feedback.

"Our robot's twining action only requires a single pneumatic control, which greatly simplifies its operation by eliminating the need for complex coordination between multiple pneumatic controls," noted Fok. "Since we use a unique twining motion, the soft robotic gripper works well in confined areas and needs only a small operational space.

"We have embedded a fiber optic sensor in the middle of the robot's elastic spine that can sense the twining angle, the physical parameters of the target, and any external disturbances that might cause the target to come loose."

Measuring barely more than three inches long and crafted out of basic silicone, UGA's mechanism might come in handy in multiple scientific arenas such as agriculture, medicine, and research where a soft touch would be helpful in handling delicate plants, surgical instruments, or sensitive lab equipment. 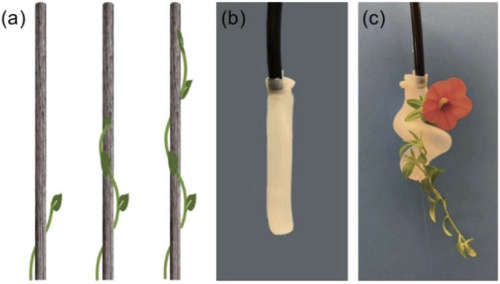 According to the paper, Fok and her colleagues observed the soft robot gripper manipulate simple objects like pens, pencils, and paintbrushes, as well as the metal wire of a straightened paperclip.

Upcoming advanced prototypes will address improvements of the auto feedback control connected to a fiber optic sensor, and the notion of miniaturizing its design to act as a component of biomedical robots.

It's a fan thing
Join SYFY Insider to get access to exclusive videos and interviews, breaking news, sweepstakes, and more!
Sign Up for Free
All Posts About
News
Science
Robotics
Science
Related Stories

Need a friend? Help's on the way, with eerily lifelike 'social robots' heading to market this year