And now, in panoramic high-def wherever available, we will also give you a behind-the-curtain vague peek-a-boo at all that's going down in the toy industry today. All presented to you in stunning Betamax Quality by your resident, if not favorite, toy journalist.

And since we're on the topic of things that go boo, let me show you something that will make you soil your Underoos. 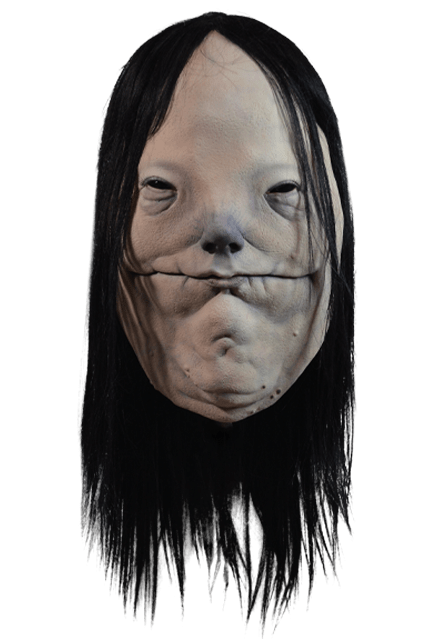 It may only be March, but it's never too early to plan for Halloween. And few things are scarier than the classic horror anthologies Scary Stories to Tell in the Dark by folklorist Alvin Schwartz. As if these stories in and of themselves weren't terrifying enough, most (if not all) fans of these incredible books remember the nightmarish illustrations by Stephen Gammell.

Ugh, they were so delightfully gross. Just stringy, vein-filled splatters and grotesque faces and sunken-in eyes and gruesome screaming faces. Which leads us to three horrifying masks of terror. Each one is available for $59.99, and you can preorder them from Nightmare Toys, which is a really cool store specializing in horror toys and memorabilia. They will ship in September.

Now, moving on to something that will help you fight ghosts and other spooky things (no, not another Ghostbusters toy), I want to introduce Hasbro's The Mandalorian Darksaber Electronic Lightsaber to you. Retailing for only $29.99 and coming out in spring 2020, the lightsaber toy is based on the design of infamous black-bladed Darksaber, a symbol of Mandalorian power for generations.

This was a main focus of many episodes in the Star Wars: The Clone Wars animated series and later on Star Wars Rebels. The Darksaber became much more famous, though, when it appeared during the The Mandalorian's Season 1 finale. Can we expect it to become an IRL weapon of legend — perhaps surpassing Anakin Skywalker's iconic lightsaber?

And speaking of superhero toys, our friends over at Hot Toys are showing off something just superb this week. It's the Miles Morales 1/6-scale figure based on Spider-Man: Into the Spider-Verse.

The figure features two newly developed face sculpts capturing Miles Morales's iconic expressions. The figure stands nearly 12 inches tall, is made of plastic, and features a magnetic attachable hair sculpture. He has interchangeable eye pieces and 30 points of articulation. This figure costs $266, ships third Quarter 2021, and can be preordered today from BigBadToyStore.

From the affordable to the expensive, to the expensive once again, we can't talk toys and collectibles without bringing up Bandai, one of my absolute favorite toy companies of all time. And now the toy giant has a Toy News treat for American collectors. On April 2, 2020, Bandai is introducing Bandai Premium USA to stateside toy junkies. Previously, items that fell under the Bandai Premium label were only available in Japan, meaning you had to have a proxy or have some sort of super-secret, probably exclusive inner-workings relationship in the toy world out there.

Not anymore! Premium Bandai USA is stocking high-quality (and sometimes more expensive) anime, video game, and Tokusatsu merchandise. These limited-edition and variant products are not available from any other domestic retailer and include action figures, model kits, jewelry, and other collectibles based on many popular anime and video game properties.

You can get rare Tamashii Nation's S.H.Figuarts action figures and Bandai Spirits Hobby's catalog of Gundam model kits (known among fans and collectors as GUNPLA), including many rare and limited-edition releases that were, until now, available only to the Japanese market! My inner 14-year-old self would be puking tears — this is the best time to be an anime fan! (Which is good because I'm now a 34-year-old Oldtaku.)

In other Toy News, Hasbro and Disney just announced, via an official press release, a renewal of Hasbro's rights under its strategic merchandising relationship for major Disney entertainment properties Marvel and Star Wars. In layman's terms, Hasbro's got the okay to make more Marvel and Star Wars toys.

"Under the Marvel license agreement, Hasbro will continue to develop a wide range of toys and games for Marvel's global Universe of more than 8,000 characters, including Iron Man, Spider-Man, Captain America, Black Widow, and Black Panther," the press release reads. "The Star Wars license agreement includes the rights to toys and games based on entertainment like Star Wars: The Clone Wars and The Mandalorian, incorporating fan-favorite characters such as Baby Yoda."

Me personally, I'm still waiting for Diamond Select Toys to give me a wild pantheon of Return to Oz figures. Like, that can happen, right? Maybe. Hopefully. Someday. Please?

It's a fan thing
Join SYFY Insider to get access to exclusive videos and interviews, breaking news, sweepstakes, and more!
Sign Up for Free
All Posts About
Features
Games
Movies
TV
Baby Yoda
Important Toy News
Scary Stories to tell in the dark
The Mandalorian
gundam
Related Stories