In the early '90s, Sega was hoping to claim a piece of market share from industry giant Nintendo, which up until that point, had been dominating the home gaming market. Part of Sega's strategy was the creation of a lovable character and mascot, one that would help define the identity of the company and attract consumers.

A number of character concepts were considered before the company centered on Sonic, a blue hedgehog determined to collect gold rings, save woodland creatures, and go fast. Since his introduction, Sonic has been the face of video games, cartoons, comic books, toys, and more.

While the character is set to make his feature film debut next year (just as soon as character re-designs are completed), this won't be the first time Sonic has been brought to life on screen. That honor belongs to the 1993 animated series The Adventures of Sonic the Hedgehog, starring Jaleel White as the titular hero.

The series ran for 65 episodes and introduced fans to a more complete view of Sonic, his friends, and the world they inhabited. Perhaps the most famous addition to Sonic canon, however, was the introduction of Sonic's favorite food: the chili dog.

Mobius' fastest heroic hedgehog practically lives on a consistent supply of tubular sausages swimming in meat and beans. It's almost as if his exploits are fueled exclusively by chili-covered hot dogs, sold from a cart. Impressive considering that Sonic often runs at speeds exceeding the speed of sound.

To that end, after all this time, let's finally answer the world's most burning question: How many chili dogs would Sonic have to eat to maintain his metabolism?

WHAT KIND OF HEDGEHOG IS SONIC?

It's as good a place to begin as any. By identifying which species of hedgehog Sonic belongs to, we can begin to narrow in on his approximate metabolic rate. A quick physical examination doesn't reveal too much. Sonic, at first glance, doesn't resemble any hedgehog species with which we're familiar.

While the specifics of their physical characteristics differ across species, hedgehogs all look moderately similar. Coloration is typically some shade of brown or black with variations on the pattern. There are, sadly, no blue hedgehogs in our own world.

Identifying Sonic based on appearance alone proves to be a dead end — until you review some of the early Sonic comics, specifically 1993's Sonic the Comic.

In that comic, Sonic regales readers with the story of how he obtained his unique look and incredible powers. We're introduced to Sonic as a more traditional-looking hedgehog; though he's still wearing sneakers and walking on two legs, his coloration is brown and his spines are slimmer and more pointed.

Only after obtaining frictionless shoes from a not-yet-evil Dr. Robotnik and breaking the sound barrier does Sonic transform into the version we know and love. More importantly, when he first enters the lab, he is greeted by Robotnik, who says, "Well, well, look who's dropped in: Erinaceus Europaeus!" 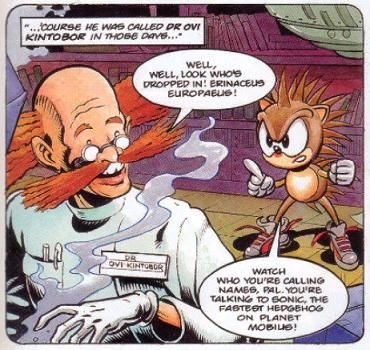 Mystery solved. According to official Sonic lore, we're dealing with a common European Hedgehog. Precisely why Sonic was capable of running at incredible speeds, even before being gifted with frictionless shoes and enduring the supersonic lab accident, is never explained. Still, we can look at Sonic's earthly counterparts and extrapolate from there.

Hedgehogs can eat up to one-third of their body weight every day. For the average European Hedgehog, that's not very impressive, because they tend to weigh .77 kilograms, or less than two pounds. But Sonic is far heftier, weighing in at 35 kilograms (77 pounds), which means that if he had the appetite of an average, everyday member of his species, he would eat up to 12 kilograms (26 pounds) of food each day. The grocery bill for that would be staggering, and we haven't even taken into account the increased caloric need of running at incredible speeds for extended periods.

WHAT'S THE AVERAGE CALORIC VALUE OF A CHILI DOG?

Again, we run into some trouble. The images available from the Sonic cartoon aren't of sufficient quality to determine exactly what kinds of chili dogs Sonic frequently ate. Was he a meat-only type of guy? Or did he lean more toward vegetarian chili? Something in between? How about the hot dog and the bun? Are we dealing with footlongs, brats, veggie dogs? Is Sonic gluten-free? There are a lot of variables here, so we're going to have to make some assumptions.

The European Hedgehog is omnivorous, as it eats fruits and vegetables in addition to invertebrates like millipedes and beetles. They sometimes even eat small vertebrates like snakes. It's probably safe to assume that Sonic ate standard chili with a mix of meat and beans. Likewise, the frank itself, as well as the bun, were probably standard issue.

A basic, no-frills hot dog bun averages 145 calories, according to Nutritionix. A hot dog comes in at 160 calories. And a one-cup serving of chili comes in at 288 calories. Any vegetables like chopped onions would have a negligible impact on the total calories, leaving our grand total for a single chili dog at roughly 593 calories. We'll call it 600 to simplify the math; let's just assume Sonic gets a few extra beans for being a regular customer.

To look at a chili dog another way, the average weight of a hot dog bun is 1.5 ounces. A hot dog comes in at 2 ounces, and a cup of chili weighs in at 9 ounces. This brings the grand total weight of a single chili dog to 10.5 ounces.

At that rate, Sonic would need to consume approximately 40 chili dogs just to hit the one-third body weight consumption that is typical of his species.

WHAT'S THE COST OF GOING FAST?

Contrary to common wisdom, the speed at which you run doesn't directly impact the caloric cost. Running a mile burns roughly the same amount of calories whether it takes you 5 minutes or 50. It's about the work done; how much body weight are you hauling and how far?

A 35-kilogram individual would burn an estimated 60 calories per mile, giving Sonic a 10 mile per chili dog (or 10/mpcd) fuel rate.

Based on this, the caloric requirements on Sonic are dependent on the distances traveled. In the eleventh issue of Sonic the Comic, Robotnik tricked Sonic into traveling to the opposite side of Mobius (Sonic's home planet) in order save Tails. When he arrived, Robotnik appeared onscreen and announced his intention to blast his home region from space with a laser.

Sonic had 5 seconds to get home and stop the attack. He saved the day, but ran halfway around the world and back again in the process, essentially circumnavigating the globe.

We don't have any solid numbers on the size of Mobius but if we assume it's approximately the same size as Earth, that would mean Sonic ran approximately 25,000 miles.

Such a run would cost him 1.5 million calories.

Assuming Sonic had the stored reserves to survive the run without shriveling away, he would need to eat 2,500 chili dogs, coming in at more than 1,600 pounds, just to break even.

Here's hoping he's able to collect a few gold rings along the way — that many chili dogs can't be cheap.

It's a fan thing
Join SYFY Insider to get access to exclusive videos and interviews, breaking news, sweepstakes, and more!
Sign Up for Free
All Posts About
Comics
Features
Movies
Science
TV
Gaming Month
Science Behind the Fiction
Sonic the Hedgehog
Related Stories