Cartoons are a whimsical land wherein everything is in flux but nothing ever changes. Characters go through incredible perils and life-altering experiences all while wearing the same outfit day in and day out. They can be an astronaut one day and go back to their job at the nuclear power plant the next. And they never age.

There's a certain comfort in these worlds, the assurance that no matter what happens, everything will be set to rights by the time the credits roll. You can turn off your television secure in the knowledge that your animated friends will be up to their old tricks again next week. Same as it ever was.

That's why it was so shocking this week when the world of Pokémon was turned upside down. One of those steadfast rules, something established long ago, changed. Ash Ketchum finally became a Pokémon Master.

It's been something of a running joke in the Pokémon fandom for years now: Ash's pursuit to be the very best was always just outside his grasp. He traveled across the land, searching far and wide, making friends, fighting enemies, and learning life lessons with the help of his trusty Pokémon pals. But no matter what he did, he could not win. Despite his best efforts, Ash was always stymied in the final rounds of any tournament he entered.

But not this time. Hooray for Ash. We're happy for him. But please be mindful of the fact that, while Ash is collecting his accolades, the world has forgotten the true hero of this saga, the character who has taken a beating time and time again in Ash's dogged pursuit of victory: Pikachu.

That scrappy little lightning rat has stood beside his trainer for 22 years, fighting battles on Ash's behalf and never wavering. Victory doesn't come cheap. Just how high a cost has Pikachu paid?

As Ash's main dude, Pikachu is no stranger to a whooping. In one of their first encounters, Pikachu, a small rodent, faced off against a giant snake made of stone and was absolutely rocked. He's taken poundings by violent birds, the natural predator of all rodents. He's been hypnotized and made to slam himself against the ceiling like a rag-doll Shia LaBeouf. All of this during the early days of their relationship. 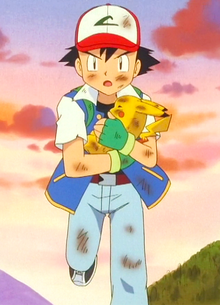 Pikachu is, of course, no ordinary Pokémon. He has unmatched moxie and the ability to conduct electricity through his body, though that's little comfort when going up against a literal dragon. Ash has pitted Pikachu against orange lizards so metal they don't even flinch at the fact that their tails are permanently on fire.

While at the Orange Archipelago, at the mercy of Ash's insatiable lust for power, Pikachu has been made to face off against fighting animals with much more experience. Adding insult to injury, he's been beaten with bones, the macabre remnants of the victims that came before him.

Pikachu has been stabbed, clawed, pounded with rocks, burned with lava, poisoned, paralyzed, and knocked out time and time again. It's a wonder he's even alive at all. And there's every chance he'd have died long ago if it weren't for …

After a particularly vicious battle, a pokémon might be in need of medical aid, which is where a Pokémon Center comes into play. Acting as hospitals or, more accurately, veterinary clinics, they are where weary warriors recover from their injuries before being thrust into the battlefield once more.

Pikachu is no stranger to these places; he must be on a first-name basis with Nurse Joy by this point.

Luckily for Ash, and for Pikachu, they seem to operate on a universal health care model, as it's unlikely a 10-year-old has the resources to account for the types of bills that would stack up from the array of injuries incurred.

It's unclear exactly what happens once a pokémon enters Nurse Joy's care, but it's likely she's more of a wizard than an actual medical professional.

We know the world of Pokémon is one in which an array of potions exist, capable of healing sub-sentient gladiators mid-battle and even reviving them once they've been incapacitated.

Considering the wide variety of injuries involved, ranging from blunt-force trauma to burns, drowning, and electric shock, it's reasonable to assume these potions merely speed up the body's natural healing process.

There has been some research in this area. Healing after injury is often related to the body's ability to grow new blood vessels and deliver oxygen and nutrients to the damaged tissues. Ira Herman, director of the Tufts Center for Innovations in Wound Healing Research, led a study hoping to speed up the natural healing process.

They found that a bacterium, Clostridium hisolyticum, could produce collagenase, an enzyme promoted the production of new blood vessels and increased the body's ability to heal itself.

Perhaps Nurse Joy is equipped with potions of the stuff, like some sort of medical yogurt, which allows a pokémon's body to heal rapidly.

When it comes to reviving a pokémon from an unconscious state, it gets a little trickier. Popular culture would tell us that the application of smelling salts is a sure-fire way to bring someone back from unconsciousness, but that's probably not a good idea.

Smelling salts work by releasing ammonia into a person's airway. Basically, it's an irritant. If a person is only slightly out of it, they can bring them into a state of wakefulness. They cause a sudden inhalation which increases the flow of oxygen and can wake a person up, but they aren't the magic wake-up drug portrayed in the movies.

When a person (or a gladiatorial animal) faints, more often than not it's nothing to worry about. Your job is to make sure they're safe and let them come to naturally.

When an unconscious state is more pronounced, however, there might be solutions in paradoxical places. Patients who have fallen into persistent vegetative states, or minimally conscious states, have, occasionally, responded to Ambien.

While the drug is primarily used for the opposite purpose, to put a person to sleep, it has been shown to awaken others. This is not entirely surprising given the reports that the drug can cause sleepwalking and other "paradoxical excitation."

The data is still contested and entirely inconsistent, but in roughly 10 percent of brain-injured patients, Ambien can result in an increased brain state.

Bacteria and sleep aids can't fix every problem Nurse Joy encounters, though. Sometimes the injuries are just too intense. Pokémon can, despite the commonly held belief, die.

And even if they don't die as a result of their harrowing and repeated injuries, the long-term effects of continual beatings can be stark.

The Horrible Legacy of Chronic Trauma

Despite the best efforts of Pikachu's medical team, it's not at all unlikely he will eventually suffer the effects of the continual punishment visited upon his body.

In recent years we've begun to understand the consequences levied upon the minds and bodies of athletes enduring physical punishment.

Chronic Traumatic Encephalopathy came into public consciousness after NFL players began suffering symptoms. A study of 111 deceased NFL players found that all but one of them had signs of the disease.

While there is some selection bias in the study, owing to the fact that many of the families donated the players' brains because they showed symptoms, the findings are still statistically significant. CTE can, unfortunately, only be diagnosed after death, and since the start of the study 1300 more players have died. Even if none of them showed any symptoms, there would still be a prevalence of almost 10 percent among NFL players, significantly more than background populations.

It seems clear, at this point, that continued trauma results in severe damage to the brain, and football players aren't the only victims.

The disease was first identified in 1973, related to the cases of 15 retired boxers. It's believed that other contact sports like hockey, soccer, and wrestling are also at risk.

Early symptoms begin to appear in a patient's 20s or 30s, and, given Pikachu's 22 years in the ring, he's at the right age to begin suffering its effects.

There is little question that Ash loves his furry companion, but he's likely signed him up for a lifetime of depression, memory loss, and dementia.

In the midst of all our celebrations, it might be worthwhile to ask whether the ends justify the means. Is Ash's title of Pokémon Champion really a cause for celebration, or should we all reconsider the cost? While Ash is toasting his own success, we might all ask ourselves, is he a hero or the series' greatest villain?

It's a fan thing
Join SYFY Insider to get access to exclusive videos and interviews, breaking news, sweepstakes, and more!
Sign Up for Free
All Posts About
Features
TV
Pikachu
Pokemon
Science Behind the Fiction
anime
Related Stories