Feeling queasy in cyberspace? Scientists trying to understand the cause of virtual reality sickness

Like someone suddenly stepping off a moving sidewalk and feeling a bit dizzy and disoriented, folks who spend a significant amount of time in virtual reality are experiencing a condition now being called cybersickness.

To help combat this delirious digital ailment, scientists at Australia's UNSW Sydney are attempting to understand more about the cognitive mechanisms by which this strange and stomach-churning situation happens.

"Cybersickness is the umbrella term for illness caused by using a computer display," says Dr. Juno Kim from UNSW Science's School of Optometry and Vision Science. "This health condition—which is very similar to motion sickness—usually includes symptoms like dizziness, nausea, eye discomfort and disorientation. But while motion sickness is a sensory mismatch between what we see and what our other senses signal about our motion, cybersickness doesn't require physical movement."

With VR technology and its signature head-mounted display providing an otherworldly immersive tool for modern gaming, design work, sports training, medical research, physical therapy, industrial skills, and academic classes, this unsettling side effect must be addressed before it can fully reach its potential.

"Evidence tells us cybersickness has negatively affected the widespread use of HMD VR by everyday consumers," notes Dr. Kim. "By better understanding cybersickness, we can find hardware and software solutions to reduce it."

The human body's vestibular system is in charge of our sense of balance and spatial orientation, and it's this component of our biological makeup that goes a little haywire in VR. A mismatch called "sensory conflict" happens when visual pieces of information absorbed by the eyes are disconnected from, or in opposition to, information taken in by accompanying senses.

Researchers speculate that there may be a multitude of reasons why people suffer from cybersickness. Some of these ideas include the "poison theory," which proposes the notion that the condition is the central nervous system's mechanism to guard the body from hazards; display lag causing confusion; and "eye-movement theory," explaining cybersickness as the result of inappropriate eye movement, eye fatigue, and focus difficulty.

"Early HMDs had inherent display lag," explains Dr. Kim. "These display lags were well-known to cause significant cybersickness. With recent advances in the development of this technology, new HMD devices like the Oculus Rift S and Quest now achieve extremely low display lags. But latency spikes can occur from time to time which appear to generate bouts of cybersickness."

Now newer, quick-loading HMDs are aiding Dr. Kim and his team to discover the puzzling effects of cybersickness and maybe deliver a plan to prevent or minimize it. One breakthrough in explaining it all comes from observing levels of scene instability where virtual environments revolve in relation to the head's rotation.

"With these state-of-the-art displays, we can finally play the game of deconstructing them by adding lag to see the impacts it has on cybersickness," he adds.

Difference in Virtual to Physical (DVP) is defined by the angular difference between the virtual and physical head. This component of VR is what constitutes the illusion of an unstable environment and seems to be the main culprit in users having a bad case of the virtual flu. 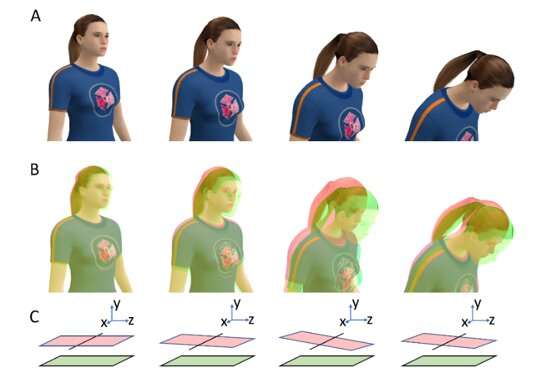 To support their hypothesis, Dr. Kim used 30 test subjects sporting the new Oculus Rift CV1 headset and then artificially boosted the time lag to cause serious synch disruption between real and artificial movements. Participants recorded levels of instability on a 20-point scale and revealed that there was a direct connection to increased display lag and feelings of cybersickness.

"We essentially created an objective geometric model to account for sensory conflict," says Dr. Kim. "The scene instability theory is the first to generate a testable hypothesis for understanding cybersickness and its causes. Now that we have instantaneous information about how much peak difference in DVP someone has been subjected to, we may have a way of predicting the likelihood that they are going to get sick.

"Cybersickness solutions could benefit the global community by providing better access to future ways of working, educating, training, and communicating."

18 hours ago
See All Posts
Editor's Picks
Get Tickets