George Lucas topped off his Star Wars saga with the theatrical release of Revenge of the Sith 15 years ago this month, on May 19, 2005. The best-reviewed entry of the prequel trilogy, the film explained the tragic fall of the Jedi Order and the rise of the Galactic Empire, effectively setting up the events of A New Hope.

Remember, though: This was six years before Disney bought Lucasfilm. No more Star Wars films were on the horizon, and Revenge of the Sith seemed like the last chance to go all out with tie-in merchandise. And since the movie featured the birth of Darth Vader, the marketing and licensing teams were able to slap the franchise's most iconic character on just about everything.

This final push resulted in some of the best swag of the entire series up to that point. Allow us to indulge in some serious nostalgia as we present 10 of the best products inspired by Episode III. We haven't had this much fun with a list since we fell into that nest of gundarks!

LIGHT SIDE VS. DARK SIDE M&M'S

If you didn't try and collect all of the different packages and pin them to the little bulletin board hanging in your room, then you weren't Revenge of the Sith-ing right. The clever promotional strategy devised by the Mars candy company was to brand dark chocolate M&M's with bad guys (e.g. Darth Vader, Stormtroopers) and milk chocolate M&M's with good guys (e.g. pre-Vader Anakin, Mace Windu).

This gave fans a chance to show support for their favorite characters and participate in the grand struggle between the opposing sides of the Force... in tasty candy form, that is. 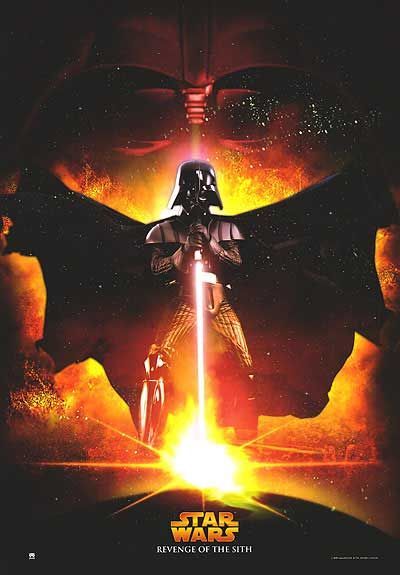 For us, this poster is on par with the Phantom Menace one-sheet of a young Anakin projecting Darth Vader's shadow on Tatooine. Sure, Vader (wearing his famous helmet and cape) only shows up at the very end of Revenge of the Sith, but the black, red, orange, and yellow color scheme of the poster perfectly embodies the sinister and harsh nature of the prequels' narrative denouement.

This piece of artwork hung in our bedrooms for more years than we can count.

As a kid, you probably worshipped at the altar of the almighty fast food toy. In many cases, we didn't even want the nourishment and begged our parents to approach the counter of a well-known chain establishment, look the employees dead in the eye, and ask with no trace of irony in their voice: "Can I just get the toy?"

Revenge of the Sith was no exception as Burger King rolled out 31 different tchotchkes to collect — from a wind-up General Grievous to a back-flipping Yoda.

And while we're on the subject of General Grievous, did anyone else think he was the coolest character in all of Episode III? He's a lizard-like alien, but he's also the robotic leader of the Droid Army; he's trained in lightsaber combat, but can make a quick getaway on a wickedly awesome wheel bike with four legs. The chase and final confrontation with Obi-Wan "Hello There" Kenobi on Utapau is one the movie's best action set pieces — rivaled only by the climactic duel across the volcanic sea on Mustafar.

That's just a long-winded way of saying Hasbro knew exactly where to hit us wide-eyed kids when it came to the tie-in toy sets. Getting to bring Grievous' bike into your home was a dream come true.

Almost nothing could match the thrill of convincing a parent to buy a box of cereal with some kind of prize inside, particularly when that toy had some sort of electronic/battery component. Showing these spoons off to your friends at school was, for a time, the ultimate status symbol of coolness.

For all you collectible completionists out there, these cups were a must-have. There was something immensely satisfying about getting to drink a Slurpee through the top of Vader's helmet and then just having that reusable drink receptacle in your family's kitchen cabinet at all times. It went from being "the cup shelf," to being a Star Wars trophy case.

As with the cereal spoons, the Pop-Tart contest was a way to turn an ordinary breakfast item into something extraordinary.

Did we ever win a sweepstakes?

...No. But, until the jadedness of adulthood set in, we never lost hope. Just imagine being one of those thousand winners: you open up a box of something you eat on a regular basis and hear Darth freakin' Vader breathing at you from inside the cardboard depths. It must've blown their young minds like Luke blew up the Death Star.

Obi-Wan and Anakin's lightsaber battle on Mustafar is part of what makes Revenge of the Sith so memorable for so many people. Sure, LEGO had plenty of sets derived from the movie, but getting to relive the unbridled action of its heartbreaking climax in brick form is something that just can't be beat.

Tragically, these LEGO minifigs couldn't scream "I HATE YOU!"

This product was two lightsabers in one and more to the point, it was a profoundly thematic representation of Anakin Skywalker's turn to the Dark Side.

We're not saying anyone should use it to recreate the wholesale slaughter of Younglings (especially since the packaging specifies that it's for ages 4 and up), but it would nice if you took a moment to marvel at the poetic thought that went into a children's toy.

Clearly the oddest item of the bunch, this airline sickness bag was certainly a unique way with which to promote the Episode III video game developed by LucasArts. But how did the tie-in title turn out? Here's a snippet from Alex Navarro's 2005 GameSpot review:

"The lightsaber dueling is ultimately too repetitive and easily exploited to be very fun for long, and each of the 16 missions (and subsequent bonus missions) don't take more than 10 to 20 minutes apiece to complete. As a result, the sum of Revenge of the Sith's parts is simply a repetitious and fleeting experience that won't appeal to anyone outside of Star Wars' most devoted audience."

So, maybe not the best Star Wars video game ever made, but probably not one that's so bad it'll make you puke.

It's a fan thing
Join SYFY Insider to get access to exclusive videos and interviews, breaking news, sweepstakes, and more!
Sign Up for Free
All Posts About
Features
Movies
Star Wars
Star Wars: Episode III - Revenge of the Sith
anniversary
toys
You May Also Like
Recommended by Zergnet
Latest on SYFY WIRE