Back in 2014, Emily St. John Mandel’s novel, Station Eleven, was a literary sensation. The National Book Award and PEN/Faulkner Award Finalist centered on an acute swine flu outbreak that kills most of the global population, and then examines how the survivors use the arts, particularly a traveling symphony, to reconnect humanity once more.

Ironically, HBO Max went into production on their limited series adaptation of the book in January 2020, only to be shut down by the real COVID-19 pandemic. Production resumed in early 2021, and the series will now premiere this fall.

At this week’s HBO Max Television Critics Association virtual press tour for Station Eleven, executive producer/showrunner Patrick Somerville along with fellow executive producers Jessica Rhoades and Jeremy Podeswa and some of their cast talked about adapting the now very-on-the-nose story for our current times.

To set context for tone, actress Mackenzie Davis, who plays the adult aged Kirsten, said of the series, “It’s not The Road and it’s not a fairy tale, but it is like the two put together where there’s danger in the woods, but there’s also beauty and rebirth in the woods. I'm glad that it’s neither a cautionary tale nor idealizing trauma and mass loss.”

Asked how close to the novel the series will stay with its narrative choices, Somerville said it is a very “aggressive adaptation” of the book, which he personally loved. He said he told Mandel that in order to tell the story in a visual medium, there would be changes and he said that she gave her blessing.

Teasing some specific changes, Somerville said the characters of Kirsten and Jeevan (Himesh Patel) end up meeting in a different way during the initial outbreak than they do in the novel. “They spend 80 days together in [an apartment] before Jeevan and Kirsten walk out together and there’s a whole big story to tell inside of there,” Somerville teased. “That means for Kirsten’s arc, that when we know her in year 20, Jeevan’s not around and we don’t know why. But there’s a slow, unfurling of a season-long mystery that has to do with how they lost each other and what happens.” 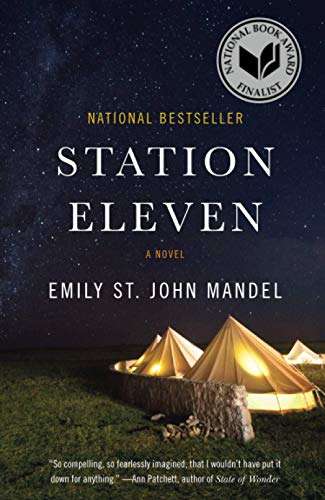 Somerville adds that he always felt the novel could have used more of Jeevan, the character in the book who was an entertainment journalist and becomes an EMT post apocalypse. “It always felt like in the novel there was room for more Jeevan and to lean more into why it was special between those two people on the day the world ended.”

The series also handles the cult led by Tyler (Daniel Zovatto) differently. "Tyler seemed to me to be an opportunity for a complicated, real story of another person who’s been making it through the pandemic, who is not a monster, but complicated," Somerville said. "A challenge in the writers’ room when we started was trying to make up a cult that we would join. What could he be saying that isn’t, 'I’m going to abduct young children and repopulate the Earth with violence and power'? We tilted more toward Pied Piper-based science and rationalist-based cult leader who was just saying true things that everybody didn’t want to hear anymore because the survivors had been through quite a lot. So our cult is quite different, and the way it all comes together is quite different, but the spirit of that book, to me, was always about what’s gentle and human inside of us before and after, and how do we get back to the people that we love?”

Executive producer Jessica Rhoades added that the series does realize the graphic novel elements from the book and the traveling symphony, which are reader-favorite elements.