Did you like Hustlers? Do you want to see more female-directed movies set in the world of strip clubs? Are you also a horror fan? Do you mind movies being more than a bit on the cheesy side? And, most importantly: do you refuse to see a movie unless it features a profusion of high-cut '80s panties?

Released in 1987 and 1989, respectively, Stripped to Kill and its sequel were directed by Katt Shea, who acted in several films financed by Roger Corman before the B-movie legend gave her the opportunity to step behind the camera. Throughout the '80s and early '90s, Shea directed four sex-worker-in-peril movies before helming what would prove to be her best-known work: Poison Ivy, starring Drew Barrymore. Shea returned to horror with The Rage: Carrie 2 and directed a few TV movies, but for the most part, her directing career has been pretty quiet… until, in a strange twist, she directed the new Nancy Drew movie that came out earlier this year.

But this post isn't about Nancy Drew. It's about the three S's: Strippers, serial killers, and…

On paper, Stripped to Kill doesn't have much in common with Hustlers, aside from the fact that its main characters share a common profession. In Hustlers, a group of strippers left bereft of their source of income following the 2008 financial crash take up scamming their former customers; it's a fun movie and also one with things to say about the transactional nature of modern society.

In Stripped to Kill, on the other hand, a detective (Kay Lenz) goes undercover at a strip club after a killer starts targeting its dancers. Its sequel features a different strip club being plagued by a sadistic killer. All the evidence points to sweet, ditzy Shady (Maria Ford), whose "David Lynch, but with tits and razor blades" dreams make her think she may be murdering her co-workers in her sleep. While the first Stripped to Kill is more along the lines of a slasher film, Live Girls leans more towards the erotic thriller, echoing the path those horror movies would take moving into the '90s.

What Stripped to Kill lacks in intelligent social commentary, it makes up for with motorcycle-themed stripper routines!

A completely accurate depiction of crimefighting technology circa 1989!

Some of cinema's sexiest flirtation.

And a scene where it's revealed that a presumed perv who always watches the girls with his hand in his pocket can't actually be jerking off because he's a war vet whose A) hand and B) dick have both been blown off.

The Hustlers connection isn't just in the exotic dancing. Like Hustlers, the Stripped to Kill movies pay particular concern to the inner lives of its characters — which doesn't seem like it should be a particularly notable thing, but female characters are so often relegated to the role of supportive significant other and/or eye candy, even when they aren't playing strippers. The fact that Stripped to Kill has multiple female characters who actually have conversations with each other feels downright special. (Both movies pass the Bechdel Test, Stripped to Kill 2: Live Girls in its first ten minutes.)

Granted, these characters aren't particularly complex. These are schlocky '80s movies, after all. You have "the one who's drug-addicted" and "the mean one" and "the one who gets engaged every two weeks." In both movies, the only person who can really be said to have an arc is Cody, the detective from the first film, who through stripping comes to feel ownership over her body. It's worth pointing out, though, that the male characters are equally thinly drawn—and, particularly in Stripped to Kill 2: Live Girls, the subject of derision. It is the job of strippers, we are told, to please men, and in Stripped to Kill they do... followed by shooting the boors who attend their clubs a withering glance or a particularly pointed bit of side-eye.

We even get the brutal murder (metaphorical) of a Nice Guy.

Man: I bet some guys try to pick you up. Some people, uh, probably feel that because you dance for them they can ask you for stuff. Must be a hassle, right?

Man: Must be easy for a guy to get, y'know, the wrong idea. I'm not like that.

Cassandra: Glad to hear that.

In Stripped to Kill, as in Hustlers, men are worthy of being laughed at, even — especially — the male romantic lead in Live Girls. He has zero game. Shady makes no secret of her disdain for his fashion sense. Most damning, he's a detective incapable of detecting. He only finds out who the killer is when he decides to look her up using a newfangled bit of police technology, only to find out that she's been convicted of a murder committed using the exact same method favored by his mystery killer. Ever heroic, he charges off to rescue Shady. Instead, she rescues him, even though it can't be easy to handle a gun when your acrylics are that long.

Even in the dance scenes, replete with bare buttcheeks and boobs a'plenty, the emphasis is on the skill and athleticism of the dancers, not how sexually desirable they are to their clientele. We rarely get cutaways to hooting and hollering men, and the dances performed are legitimately impressive. (If, one expects, a bit too elaborate in their concepts and staging for a low-class strip joint in '80s Los Angeles. Maybe Middle Ages public execution-themed exotic dancing routines—or whatever the hell this is—were common back then? I don't know. Moving on.)

One thing the movies have in common—regrettably so—are killer reveals that play into bigoted tropes. In Stripped to Kill, the murderer is one of the dancers... who is in fact not the dancer at all, but her brother, who snapped when he found out his sister and her female lover were moving away together. Driven over the edge by this perceived abandonment, the brother kills both lovers, assumes his sister's identity, and starts killing anew. In Live Girls, we get a possessive, obsessed lesbian with what amounts to drug-assisted mind control powers. (The last part of that is pretty cool.) Lesbians and trans people: In the world of bad movie clichés, they're one rejection away from snapping and murdering a whole bunch of people.

The Stripped to Kill movies, then, contain the best and worst of '80s horror sleaze.

I've saved the best for last. Namely, this poster: 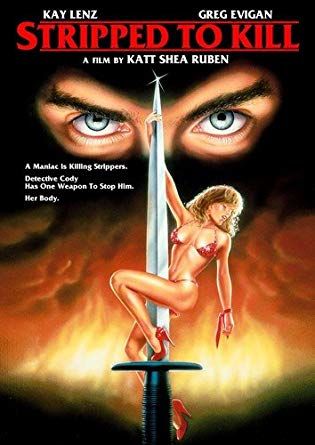 Once you've pried your hands away from their defensive position covering your junk, both films are available on streaming: Stripped to Kill on Amazon Prime and Stripped to Kill 2: Live Girls on Tubi.