Let's keep that shopping virtual for just a wee bit longer, fellow toy lovers, and take a spin back through those toy shelves with your resident, if not favorite, Toy Journalist.

It may not be store-browsing time quite yet, but we're going to keep on bringing all of that awesome toy news directly to you. Because this week, my toy collecting friends, we are looking (exclusively) at superhero toys!

McFarlane Toys has been just owning at life with the new DC Multiverse line. Each newly revealed action figure has been more delicious than the last. So to keep this momentum going, why not add a super cool chase variant into the mix?

Right now for $119.99 on BigBadToyStore, you can purchase an entire case of the black and gray Batman figures with one of the blue and gray "Neal Adams"-style chase variants. Chase version or standard, these figures are awesome quality. They stand 7 inches tall, come with a grapple launcher, Batarang, character card, and a display stand.

These bat-boys are shipping June 2020, so prepare for your collection to get cooler.

The next beautiful new superhero toy is a Walgreens exclusive, which means... yup, you guessed it — finding it on your local store's shelf will be an adventure.

Moon Knight is joining the Marvel Legends line-up, and there is something about this figure that I find so fascinating. The last mainstream figure of him we heard about was Mezco Toyz's One:12 Collective Moon Knight, and of course, that ran about $90. So if you want this character on your shelves, you're not ready to drop that much cash, this $20 figure from Hasbro will probably make you happy.

In typical Marvel Legends form, Moon Knight will stand 6 inches tall. He also comes equipped with an extra set of hands, some crescent moon accessories, a staff for fighting, and a swap-out head.

Speaking of Mezco Toyz, the company has revealed the newest addition to its One:12 Collective series of figures. It's Wonder Woman, and she is combat-ready!

Via Mezco, she is "outfitted in a Themysciran battle suit with removable neck and shoulder armor, worn only by the most elite Amazonian warriors. The fearless demigoddess wears a cape with an integrated posing wire that attaches via a clasp at the neck. Bullets ricochet right off her wrist bracelets with the included effects that attach via magnet. Wonder Woman is well-equipped to fight for justice, complete with the Sword of Athena, Lasso of Truth (which can be held on her belt), a battle axe, a spear, and a shield." 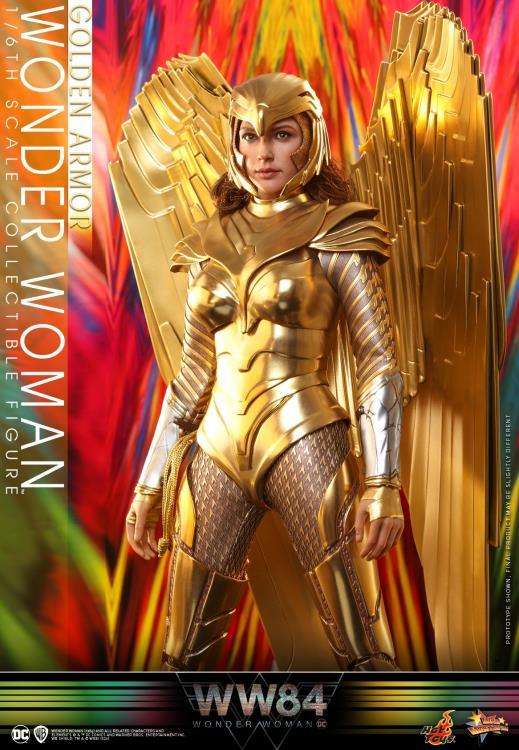 Can't get enough Wonder Woman? Now you don't have to, because the incredible people at Hot Toys (makers of super life-like premium statues) are showing off an amazing Wonder Woman 84 figure that stands at an amazing 15 inches tall.

Per Hot Toys, the figure is "based on the appearance of actress Gal Gadot as Wonder Woman in the upcoming movie Wonder Woman 1984. The figure features a newly developed head sculpt with long curly dark brown real fabric hair and a specialized body tailored for Wonder Woman. The Golden Eagle Armor features a set of massive wings in a natural position, a shiny helmet, Wonder Woman's signature weapon 'Lasso of Truth,' and a specially designed figure stand."

Last week, Hasbro celebrated Fan Friday with more Marvel Legends announcements than we knew what to do with.

And included in said reveals was something that just blew me away with its glory. It was the Spider-Man Retro Marvel Legends 6-Inch Action Figures Wave 1 collection! It costs $119.99 and will be coming our way in September 2020. Included in this awesome box of action figures of Spidey love is Spider-Man, Electro, Peter Parker, Gwen Stacey, Green Goblin (who I ordered separately right away!), and Daredevil.

Each is packaged in that tasty '90s Toy Biz style packaging (which is one of my most favorite aesthetics in the world) and stands 6 inches tall.

We're nearing the end, my toy-collecting friends, but we couldn't wrap this up before seeing what amazing Superhero toys are coming out of Japan... because you know what? Toys from Japan are always a special flavor of detailed, gorgeous, perfect, and, well... expensive. But today, Medicom is showing us two new additions to its fantastic MAFEX collection, kicking off with my beautiful love… Gambit.

Gambit, as he appeared in the X-Men comics, leaps into Medicom's MAFEX action figure lineup! Gambit stands over 6 inches tall, and includes a fabric coat with poseable wires built-in. For me, this is basically the ultimate Gambit, and with that '90s hair and headband, there's no love purer than the one I have for my card tossing pre-anime bishonen pretty boy.

His box includes two head sculpts, two sets of hands, a staff, two staff energy effects, and two energy playing cards. You can preorder MAFEX Gambit Comic version today for $104.99 at BigBadToyStore, or for $77 over at HobbyLink Japan. He will ship in March 2021.

And last but never least, give it up for America! Captain America that is, as he joins the MAFEX line. This iteration is based on his appearance in the blockbuster film Avengers: Endgame, specifically the part where he finally wields Thor's hammer.