Occasionally, I'll get flashbacks of cartoons from when I was growing up in the 1980s. Did I really watch a cartoon about an ape and his two friends called Ghostbusters? Was there a space-centric cartoon starring a horse named Bravestarr or was that a fever dream? Did Barth, a chef who would serve up kitty-litter in burgers to kids, actually exist or was it some sort of nightmare? As evidenced by the Care Bears, Teenage Mutant Ninja Turtles, Transformers, He-Man, and Thundercats, cartoons in the 1980s were near insane. Beyond selling loads of toys, there seemed to be no rules for creating a cartoon in the 1980s.

It was in this mind frame that I started to recall back to 1988, watching Saturday morning cartoons, and… were there two shows about dinosaurs, space travel, futuristic weapons? Enter Dino-Riders and Dinosaucers. After a quick search, all the memories came flooding back: The epic battles between the dinosaur-riding Valorians and the evil Rulons on prehistoric Earth on the 1987 Dino-Riders cartoon and the war between the intelligent anthropomorphic Dinosaucers and their world-conquering Tyrannos on 1988's Dinosaucers.

To get a better sense of how these two Dinosaur-centric cartoons made their way into the pop culture lexicon, SYFY WIRE spoke to Dinosaucers creator Michael Uslan and Dino-Riders writer and co-creator Carla Conway about creating their series, what kind of inspiration they drew from, and what could be next for the Dino-Riders and Dinosaucers.

When Uslan's son David was about 5 years old, he began started spinning tales about dinosaurs in space. With giant, tooth-gnashing monsters who roamed the earth long ago, it's not hard to understand why David, like many kids, loved his dad's stories.

"His favorite thing to do was to go to the Museum of Natural History and see the dinosaurs, the other thing was going to Hayden Planetarium. He knew the name of every dinosaur and loved outer space," Uslan says. "I realized I was the same way when I was younger and so I'd make up stories when I was getting ready or putting him to bed. One night, I just kept saying, Dinosaurs, Outer Space, Dinosaurs, Outer Space, Dino...saucer? Dinosaucers. I had a title but that was about it."

Night after night, Uslan fleshed out the idea with his son listening closely. What if there were a planet in our solar system, in opposite orbit, always hiding behind the sun? What if on that planet, life had evolved much like ours, but instead of a meteor wiping out the dinosaurs millions of years ago, they had survived and evolved?

Uslan created the Tyrannos and the Dinosaucers, two warring civilizations of intelligent dinosaurs who had recently discovered Earth. With 6 billion pieces of meat for the taking, fresh resources, and little to stand in their way, the Tyrannos set out to take Earth for their own. The only group able to repel the invasion was the Dinosaucers and, of course, a few human kids. 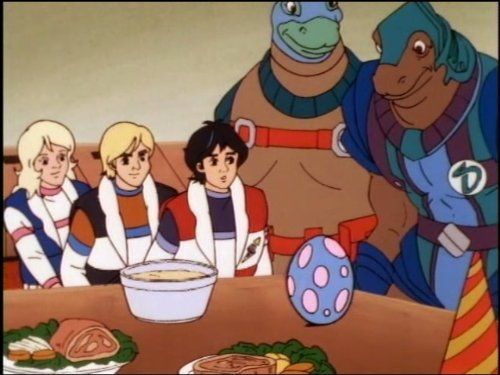 Taking a cue from the comic book sidekick trope and inspiration from his own family, Uslan created the Secret Scouts, a group of kids who would help the Dinosaucers: David (named after his son), Sarah (his daughter), Paul (his brother), and Ryan (his cousin).

At the time, Uslan — who's now best known as an executive producer of every modern Batman film to date from Tim Burton's 1989 classic to 2017's Justice League — was just starting out and didn't know much about the entertainment industry. But he reached out to some family in the TV industry and commissioned Joe Kubert to help design the characters.

"He drew up these characters from my descriptions and we created rocket ships in the shapes of dinosaurs, guns that looked like fossils, and I came up with their base, a Lava Dome," Uslan says.

Uslan and his team created 35 art boards with color drawings of each of the characters, each of the vehicles, the weapons, the humans, the settings, and presented it all on a silver platter with a great story to tell.

Uslan lined up a deal with Andy Hawyard at DiC Entertainment to produce and, additionally, worked out a deal to syndicate the show via Coca-Cola Telecommunications (an arm of Columbia Pictures at the time).

Way back then in the '80s, the kids' TV market was mostly confined to Saturday mornings, weekdays in the hours before kids went to school, or in the afternoons when they returned home from school. Uslan says if producers were going the syndicated route, which eliminated Saturday mornings, you had to create 65 half-hour episodes.

"Once we had everything in motion, Rick Rosen was the one who went all over town and finally sold it," Uslan says. "He met with the heads of almost every affiliate with our sizzle reel. It's to his credit that the show was picked up."

Uslan says producing 65 episodes of Dinosaucers was grueling but fun. Each week, he would fly from New York to Toronto where the voice cast would record the show.

Rounding out the team was the legendary science fiction writer Diane Duane, writer Brynn Stevens, and Marsha Goodman, who oversaw the voice cast.

"I would fly up every Monday and it was just a lovefest honestly," Uslan says. "We had a great time bringing it to TV."

Unlike Dinosaucers, Dino-Riders was created expressly to sell toys. In 1988, action figures were big business and had gone mainstream with the introduction of Transformers and Masters of the Universe. To capitalize on this, TYCO came up with the Dino-Riders, a set of toys that would combine the everlasting appeal of dinosaurs with sci-fi, lasers, and intergalactic space warfare.

In previous interviews, TYCO's head of research and development Warren Bosch stated that the initial idea came from TYCO's marketing VP Jim Allie, who simply said he wanted to combine dinosaurs and action figures somehow. According to Bosch, he came up with the idea that aliens visited earth in the ancient past and combined their technology with the dinosaurs' natural abilities.

When illustrator Paul Kirchner joined the project, he said several ideas such as the concept of the brain box — a device that would help riders control the dinosaurs — were already in place. During that time, Kirchner came up with the backstory and drew the comics that came with the toys.

With help from Dr. Robert Bakker, a real-life paleontologist, the team crafted some of the most realistic dinosaur figures ever seen at the time.

It was at this time when comic book legend Gerry Conway and his wife Carla were asked to help flesh out the backstory of the project and ready a TV series that would launch alongside the toyline.

"I believe we were given the project because of some work we had done on G.I. Joe and some other projects, and our work was very much respected," Carla Conway says. "Also, I think that because we had been doing comics and Gerry especially had a very strong sci-fi background, with one book published, and Gerry having been named a young sci-fi writer to watch by either Time or Newsweek magazine, we were sought out."

Conway says it was easy for her and her husband to work with a "dino" theme and make the characters "fun with just enough edge to be safe and not fearful.

"We wanted them to have an adventurous dynamic," she adds. "We had a young child and were around young children, which also helped. At that time, most new animation series were linked to toys, so it was not unusual for us to be thinking about the toys consciously and subconsciously." 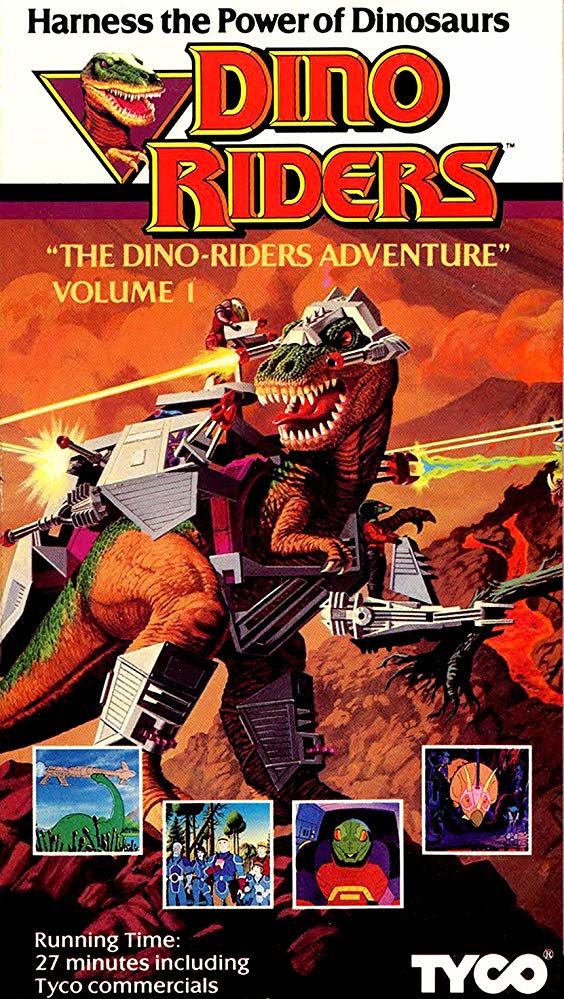 The Conways revamped the classic good vs. evil story of the Valorians, a superhuman race from the future, and the Rulons, a race of alien-like/humanoid creatures who attacked them. During the attack, the Valorians tried to flee the assault by utilizing the Space Time Energy Projector (S.T.E.P.), a sort of time travel device. Of course, something went wrong and the Valorians were transported through time to the age of the dinosaurs. Unbeknownst to the Valorians, the Rulons also traveled through time.

Whereas the Valorians used telepathic powers to communicate with the dinosaurs, the Rulons, led by their evil leader Krulos, brainwashed the dinosaurs via brain-boxes.

"Each episode highlighted various characters and the toys linked to them. I may get in trouble for saying this, but at that time, boys and girls shows were still somewhat differentiated," Conway says. "But because we had a daughter, we always tried to make the boys shows that often had a lot more action and [a] 'fun' edge accessible to girls. Also, the idea of small beings (people) being able to control big dinosaurs is every child's dream of [a] small child (Son or Daughter) controlling [a] large being (Parent)."

At a time, when TV animation pushed boundaries just as comics had earlier, Conway says there were more little bits of characterization, more moments of "edgy" danger, and more expression of joy in victory rather than a polite restrained smile by the victor.

"We did enjoy working on the show and liked the toys when they came out," she says. "I remember we were also influenced a little by what was being done in the Japanese toy market with their extremely expensive toys that were very complex. Time travel, lasers, and aliens were second nature to us and anyone who had read Isaac Asimov's Foundation trilogy or seen Star Wars. I think the show benefitted from our involvement and perhaps we helped to strengthen its 'longevity' legs so it could handle time and be here today."

With the evolution of special effects, the time for a Dino-Riders or Dinosaucers movie may be now. Over the years, there has been speculation about both properties being optioned for development but nothing concrete has happened — yet.

In 2015, several sites reported Mattel, which absorbed TYCO in the late '90s, was working with Solipsist Films producers Alissa Phillips and Stephen L'Heureux on a Dino-Riders movie.

Just last year, Uslan finished a Dinosaucers graphic novel with Lionforge and, according to Uslan, the Dinosaucers could return to the small screen soon. The 1987 series is currently streaming on Amazon Prime.

"People really appreciated the fact that the show was written on two levels so that parents could sit and watch it with their children and appreciate and laugh at other things than what the kids were laughing at," he says.

Which 'Obi-Wan Kenobi' characters could reappear?

‘Ms. Marvel’ gets some answers in Episode 4 recap