The enduring greatness of Curt Swan, the forever Superman artist

I knew Curt Swan's art before I ever knew who Curt Swan actually was.

I bet I'm not even close to the only comics fan who can say that. No other artist has ever been as closely linked to a single character as Swan was, is and always will be to Superman. Swan, who died in 1996, would have turned 100 on February 17. The various tributes and posts I've read about him the past few days reminded me of just how incredible a career the guy had. He drew, according to comics historian and self-professed Swan super fan Arlen Schumer, 19,000 covers and interior pages of Superman-related art over his decades-long career at DC Comics, more than anyone else has ever drawn the Last Son of Krypton. That is simply astonishing.

Just as important as the quantity of Swan's work was the quality.

Some of the milestone moments in the Superman canon Swan illustrated include his first meeting with Batman in 1952's Superman #76. He also penciled Superman #199, which features the classic first race between Superman and The Flash, and Superman #233, the "Kryptonite Nevermore" issue which was part of the '70s revamp of DC's signature icon.

Swan defined the look of the Man of Steel for not one but two generations. His Silver Age Supes had countless facial expressions and a simple, muscular build that was perfect for the goofiness of the stories of that era. When I first started collecting comics at the tail end of the '70s, I was a Marvel guy. But as I made regular visits to 7-Eleven and bought more comics with each visit, I started to reach out for other heroes. Superman was one of them. I started buying Action Comics and Superman, which meant I was enjoying Superman adventures penciled by Swan. I never really paid attention to creator credits then, so it would be a few years before I would learn the name of the artist who drew the perfect Man of Steel. (FYI, the only piece of Swan original art I own is this page, from a late-'70s Hostess Twinkies ad).

As comics evolved during the Bronze Age, so too did Swan's version of The Man of Tomorrow. He transformed into a graceful, elegant and aspirational figure. A lot of people likely picture Christopher Reeve when they think of Superman. Well, one reason Reeve was the perfect choice to play Kal-El was because he looked like Swan's Superman come to life. Swan (and his inking partners, with two of his most famous being George Klein and the back-half of "Swanderson," Murphy Anderson) could draw a perfect Superman — not just on a cover, but throughout a 20-page story.

Yet there are some comics scholars out there who give Swan the backhanded compliment of being a dutiful draftsman who didn't stray from the DC house style; someone who approached his monthly art assignments the same way a bookkeeper practices their profession — with efficiency and little inspiration. I think they're high on Kryptonite.

Consistency shouldn't be confused with blandness or lack of effort. The demands of producing monthly comics are incredible, yet for much of his career, Swan often penciled two books a month while doing tons of covers (and not just Superman covers; Swan did many awesome Silver Age Batman covers). In the covers below, check out the composition and perspective and the sheer beauty of the linework. Does it look like Swan was cutting corners? Does that art look like the creation of someone going through the motions and who wasn't creatively inspired? 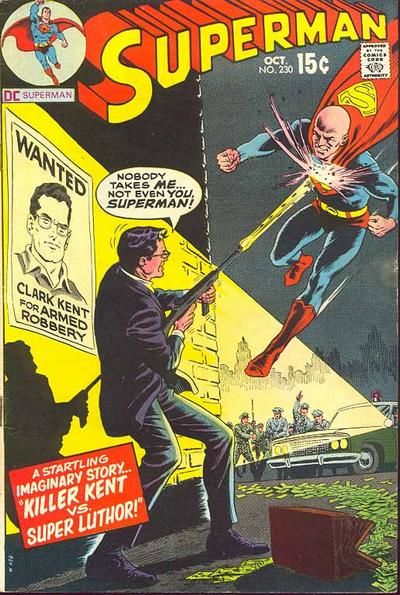 It's a shame that his tenure as DC's Superman artist ended in the tactless way it did, with Swan being unceremoniously fired from the books as the publisher was preparing to reboot Superman after Crisis on Infinite Earths. It's a shame that his consistent greatness wasn't more appreciated at the time, but history has been justly kind to the artist. He's been gone nearly 25 years, and despite some incredible artists succeeding him as the artistic caretaker of Ma and Pa Kent's pride and joy, Curt Swan's Superman is still almost everyone's Superman.

No other creator in the history of comics has created such an indelible link to a specific hero. The closest I can think of is John Romita Sr. and Spider-Man, but even the Jazzy One comes up short when compared to Swan's decades-long commitment to the Man of Steel.

There is a debate that occurs every few years about Superman's viability as an ongoing comics character. Too powerful, they'll say. Not relatable enough, some will say. But once upon a time, for a long time, Curt Swan made drawing Superman look easy.

Have any thoughts on Curt Swan and his work? Find me on Twitter/Facebook/Instagram and let me know.

And here's your weekly reminder that Behind the Panel is a video and audio series, as well. Our video series is chock-full of my in-depth interviews with amazing comic book creators. The Behind the Panel podcast is an audio documentary series that provides unique insight into your favorite creators and stories. Check 'em out, we think you'll enjoy them.