The Relic: a lesson in leaving artifacts where you find them

I grew up in the Chicagoland area, home to both the Museum of Science and Industry and the Field Museum of Natural History. If I could spend the entire day at either museum, I would and often did, especially the Field Museum. I couldn't get enough of the vast animal taxidermy collection, and of course I loved learning about extinct animals and fauna native to the region. Sue the T-Rex is still a favorite of mine. I also enjoyed learning about other cultures from places I didn't have the pleasure of visiting myself.

As I got older, however, my love for museums in general started waning once I found out that sometimes those precious artifacts on display weren't always freely given by their original owners. Instead, they were often stolen.

As recently as 2018, after years of asking for their belongings, Nigeria was finally able to get some of their artifacts back, but on loan from London's British Museum. To put it plainly, the British Museum is trivial for believing such an arrangement is anything but disrespectful. You can quickly get a headache thinking about how many museums "own" other countries' archaeological treasures, displaying them in their museums without the originators' permission. The thing is, however, when you steal, it's because you have no intention of asking for permission. Better to take what's yours, because it's always belonged to you anyway— a colonizer credo of sorts.

There is an abundance of movies that romanticize searching for lost treasures and artifacts. The Indiana Jones franchise is the first one to come to mind. Some movies do the exact opposite, like Black Panther, which addresses the issue head-on without pulling any punches. Before Black Panther's memorable museum heist, there was 1997's The Relic, a science fiction horror movie that doesn't have the same direct and intentional agenda as Black Panther but still has a message that should be heard loud and clear. The Relic listened to the saying "Curiosity killed the cat, but it came back" and proceeded to say, "Not on my watch." It's a cathartic tale about giving someone exactly what they asked for ... and making sure they never come back to take more.

The movie opens with some out-of-place white guy taking part in a ritual with an unnamed tribe. He is anthropologist Dr. John Whitney, who was sent by the Field Museum of Natural History to study the Zenzera, a newly discovered tribe in Brazil. The museum is days away from opening a new exhibition called Superstition, and one of the artifacts sent by Dr. Whitney is to be displayed. It's a statue of a mythical forest monster worshiped by the Zenzera tribe called the Kothoga, a chimeric beast they use to get rid of their enemies. Soon after the ritual scene, Dr. Whitney tries to retrieve whatever he planned on sending to the museum from a cargo ship, but he's told it's too late. He sneaks onto the boat anyway, looking for crates to no avail. The ship arrives in the Illinois River with the entire crew massacred and — weirdly — all missing their hypothalami.

On top of that, one of the crates Dr. Whitney was searching for is delivered to the museum containing only leaves with egg-like sacks stuck to them. All of this, of course, is no mere coincidence. It turns out the Zenzera's mythical forest monster isn't mythical at all, but very real and extremely dangerous. They were fully aware of what they were doing, letting Dr. Whitney "study" them and send back his findings. After all, the purpose of the Kothoga is to rid the Zenzera of their enemies. 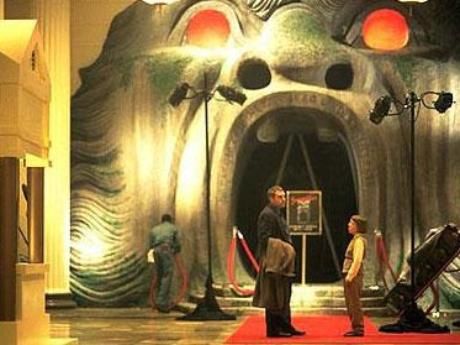 According to the movie, those leaves found in the crate were the same leaves the Zenzera would lace with hormones and give to an animal so that it would transform into the mythical Kothoga. The catch is that the creature needs the hormones to survive, and the tribe used that to their advantage. The Zenzera would stop feeding the Kothoga the leaves, causing it to go after their enemies and consume their hypothalami. If you didn't know, the hypothalamus is the part of the brain that secretes hormones, hence the method to their madness. Once the Kothoga has nothing more to consume, it dies, leaving the Zenzera free to come out once the coast was clear. Unbeknownst to Dr. Whitney and everyone else in the movie, the Zenzera wanted absolutely nothing to do with him or anyone else. There is a good reason why they went undiscovered for so long.

Spoiler alert: Dr. Whitney is turned into the Kothoga, who wreaks havoc on the museum and is why the new exhibit never opened to the public. Their so-called mythical forest monster was more than an artifact for the museum to put on display.

Unfortunately for Dr. Whitney and his colleagues, they couldn't strike a bogus deal to loan back whatever they took from the tribe, and the Zenzera never wanted them to. They made sure that not only would their new visitors never return for continued studies, they wouldn't come back at all, dispatched by the guy they sent in the first place. The Zenzera weren't a tribe who needed to be studied like some newly discovered creatures, and the assumptions made about what they worshiped came back to make a meal out of whoever encountered it. It's gruesome poetic justice.

Not everything has to be on display for the rest of the world, and sometimes it's best to leave something undiscovered and with their rightful owners.