Warner Bros/Cleopatra Jones and the Casino of Gold

The early to mid-’70s was an exciting time for Blaxploitation; there was an influx of films like Cleopatra Jones, Coffy, Foxy Brown, and Sheba, Baby that introduced leading Black women into the predominantly male genre. Although these heroines were women not to be trifled with, they paradoxically performed hyper-femininity and hyper-masculinity — simultaneously acting as lethal action heroines and sex objects.

While these movies, at first glance, would seem like they could be looked to as a source of women’s empowerment, that isn’t wholly true. They were very much there for the male gaze; functioning to meet the perceived demands of the targeted young Black male audiences, these films predominately had plots focused on revolutionary vengeance and tons of female nudity. There were also apparent borders drawn between Black and white femininity. Lesbianism was extremely racialized and, therefore, subsequently linked to the binary struggle between good and evil as white women villains were often lesbians, and the Black women heroines were always heterosexual.

Black women struggled with both race and gender expectations in the '60s and '70s and still do to this day. Not much has changed in that regard. However, during that era, both the Black Power and women’s liberation movements were going strong, creating an authentic tug of war with Black women right in the middle. Black men and non-Black women were in a position to treat race and gender as two mutually exclusive categories. Either race was privileged over gender or vice versa. Black women were expected to consider their race over their gender by their Black male counterparts, creating a gendered power structure within the Black Power movement. This meant Black women were pushed into secondary supporting roles in what was a male-dominated struggle for revolution. On the other side, the women’s liberation movements, which were considered second-wave feminism embraced by white women, became their form of resistance. Black women finding themselves caught between the two felt forced to denounce feminism, as it was just something for middle-class white women.

With all of this in mind, the directorial choices made for the Blaxploitation films starring strong heterosexual Black heroines fighting against evil white lesbians start to become clearer. A Black queer woman wouldn’t necessarily fit into the supportive role to a Black man the same way a heterosexual Black woman would. A Black woman interested in other women doesn't necessarily fit what creators were going for when it came to creating these women for the targeted male audiences. So, there is no need to make the lead heroines like Cleopatra Jones queer; however, the opportunity to further racialize queerness and segregated sisterhood is there and seized twice.

In the first Cleopatra Jones movie, Cleopatra faces off with a villain named Mommy, an older white woman who exhibits predatory behavior towards the women she keeps around for her pleasure. Although she’s a murderous drug queen pin who deserves to be taken out, Mommy is an evil woman who also happens to like women. Her character acts as the consummate anti-hero to Cleopatra; her exaggerated gender transgressions served to further separate the characters. This isn’t a one-off occurrence either; in the sequel Cleopatra Jones and the Casino of Gold, the protagonist is once again challenged by a white lesbian villain named The Lady Dragon. She is the head of an underground drug empire. Our introduction of her sexuality happens right away, as she emerges from what appeared to be a lesbian sex orgy. 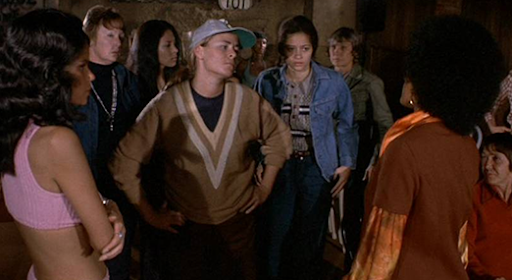 This brand of good-as-straight versus evil-as-queer also appears in Foxy Brown. Brown and her friend, Claudia, enter an all-female gay bar and are almost immediately surrounded by white lesbians. Unlike Cleopatra Jones, however, where there is just reason for Cleopatra to fight those women, here white lesbian characters have no evident beef with either Brown or Claudia outside of them appearing in the bar. In fact, any other establishment could have been used for Brown and Claudia to seek refuge in, but the use of the lesbian bar functions on a deeper level to highlight race and sexuality as dividing factors in forming female solidarity. Also, the erasure of Black queer women when queerness clearly exists in these films reiterates that they serve no purpose or usefulness.

Fast-forwarding to the present day, there's Marvel’s Black Panther; while being no different than other movies within the MCU when it comes to failing to include a prominent queer protagonist and not just queer subtext for others, it also isn't too far removed from the Blaxploitation films that came before it even though the heroines of the film aren’t solely present for the male gaze. Black Panther has a plethora of Black heroines, but the known queer Black heroine in the movie, Ayo, has little screen time and no lines — not to mention, the only way one would be aware of Ayo’s sexuality is through knowing the character in other forms of media where her sexuality is clearly expressed (like the limited comic series World of Wakanda).

In a movie that doesn’t shy away from allowing the women to be part of the conflict, allowing only the heterosexual women to be at the forefront is unfortunate. The beauty of Black Panther was in the display of sisterhood between such strong female characters, but reducing the lone known Black queer woman to a background character is such a huge misstep, one echoed in the history of the Blaxploitation films that came before it, and one that is in dire need of course correction.

Black queer heroines deserve to be a part of the narrative the same way as Black heterosexual heroines have been. As far as mainstream movies go, Black Panther 2 would be an excellent opportunity to do so, given that Ayo is already an established character. Hopefully, that opportunity is taken, but in general, we need many more queer Black heroines at the forefront of their own narratives.

10 Black comic book characters coming to a screen near you