Get ready to make even more space on your shelves, my toy-collecting friends, and dive back into that toy box for another awesome week with your resident, and hopefully favorite, toy journalist. Together we shall experience the loss of our dollars and have tons of fun going broke from pre-orders galore!

Let’s check some seriously spectacular new retro toys and then experience the jump-scare-boos with a whole plethora of wicked-cool horror gems!

BACK TOY THE FUTURE

Great Scott! Doctor Emmett Brown, the genius behind the first time machine and one of the greatest movie characters of all time, is joining NECA’s Ultimate line.

Ultimate Doc Brown is based on his 1955 appearance in Back to the Future with two interchangeable heads portraying a generic expression and the iconic shocked expression. To help Marty get back to 1985, Doc Brown also comes with a wrench, drawing of the flux capacitor, interchangeable hands, a blueprint of his house, and a letter from Marty!

Jada Toys is striking gold again, and this time, it’s in the form of one of the most important cartoons of all time! This Batman: The Animated Series 2 3/4-inch MetalFigs Diorama Set features over 50 percent die-cast metal mini-figures. This battle scene features Batman and Robin facing off against The Joker and Harley Quinn with Gotham City as the backdrop.

Each figure features high-quality paint and craftsmanship, and all are staged in dynamic poses and ready for action! You can preorder this set today for $15.99 and it will ship August 2020.

In August, Hasbro and Jazwares will bring the iconic toy franchise that many Gen Xers still dream about, Micro Machines, back to toy shelves. While it is not a surprise that the classic Galoob toy is making its return to shelves (displays were teased and shown off at New York Toy Fair 2020), fans of the miniature car line are finally being treated to open preorders and new images of the upcoming toys and playsets.

I personally have always loved playsets that double as storage and carrying cases. Micro Machines Super Van City costs $59.99 and is available for preorder now via Amazon.

Are you ready to get spooky? Prime1 Studio is launching its new Cutie1 figure lineup with Pennywise from It! Designed to resemble a plush stuffed toy with textured details, these figures are in a compact size (4.7 inches) that’s easy to collect and display, plus they have magnets in the soles of their feet to keep them securely on their base.

Prime1 is known for items that aren’t exactly ... well ... cheap, so it’s really nice to see this burlap sack-boy-style figurine in action.

Beware the NECA horror attack, because the following items are spookalicious. Get ready because Jason is back ... for the seventh time!

From the Friday the 13th franchise, NECA gives fans the definitive collector’s version of Jason as he appeared in Part VII, complete with a bloody, disgusting face. This articulated 7-inch scale action figure includes two interchangeable heads and is loaded with accessories in its window box packaging.

Get ready to Scream, because NECA is proud to announce that one of the greatest slashers to come out of the '90s is joining the Ultimate line!

Ghostface stands approximately 7 inches tall, is dressed in an all-fabric robe for full pose-ability, and comes with a disturbing number of sharp objects, including three knives and a scythe. This Ultimate offering contains four interchangeable heads, including the original mask, the bloody variant, a zombie mask, and a glow-in-the-dark mask.

The adorably creepy Toony Terrors line continues with series five, bringing even more stylized horror icons into the mix! I absolutely adore (and collect) this line. I am so grateful that I ordered a standalone Ghostface the other day, because these beauties are gone.

Hey, you have your vices and I have mine. However, if you want the entire wave, you can still get that today for only $59.99. Standing approximately 6 inches tall, the action figure assortment includes Ghostface with knife accessory, the Creep (Creepshow) with lantern accessory, Bloody Ash (Evil Dead 2), and Bloody Tears Michael Myers (Halloween 2). This set will ship from Entertainment Earth in January 2021.

AS THE CROW FLIES OFF SHELVES

The '90s love continues with a Diamond Select Toys release. Eric Draven has returned, and The Crow lives again! This 7-inch scale deluxe action figure of the Crow is based on his trenchcoat-wearing appearance in the 1994 movie and features 16 points of articulation. Accessories include gravestone, guitar, sword, crow, and interchangeable hands. The figure was designed by Yuri Tming and sculpted by Chris Dahlberg.

You can order Eric Draven from Entertainment Earth for $22.99 and he ships December 2020. 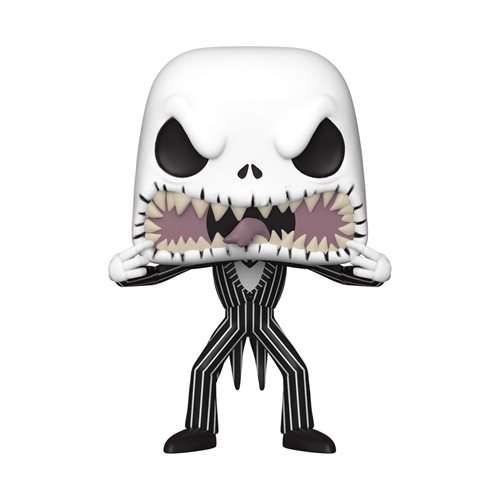 We’ve reached the end, my toy-loving friends, but we can’t wrap a discussion about horror toys without giving some love to The Nightmare Before Christmas.

Funko is making spirits bright by giving spooky toy lovers some awesome new Nightmare products to choose from. In the Pop! direction, we have Sally (with her sewing needle), Scary Faced Jack, Jumbo Jack With Zero, The Mayor with a megaphone, and Art Deco Jack to choose from. We also have The Nightmare Before Christmas Funkoverse board game, and a super charming advent calendar featuring The Nightmare Before Christmas that includes 24 Pocket Pop! Mini-Figures.

It's a fan thing
Join SYFY Insider to get access to exclusive videos and interviews, breaking news, sweepstakes, and more!
Sign Up for Free
All Posts About
Features
Friday the 13th
Important Toy News
Scream
the crow
toys
You May Also Like
Recommended by Zergnet
Latest on SYFY WIRE