Get ready, my fellow lover of toys, because we are heading right back into that toy box for another week of newly announced toys and collectibles that are heading your way soon. Join me, your resident if not favorite Toy Journalist, while we collect all of the pretty things we love in toy form. And this week, we are going to do something a little different. We will be looking at six amazing items, all new in the toy collecting sphere. The first three are new-based-on-old toys from the big guys, and the last three are limited-run toys made by independent toy companies that are inspired by the classics. Grab hold of your socks and dive back into that toy box with me and get ready to time travel, buckaroos! 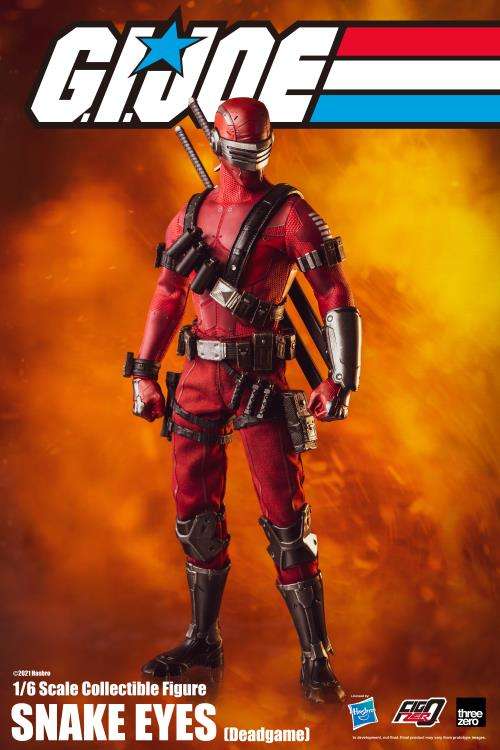 First on our list will amuse comic book fans of all ages — Threezero has revealed a 1/6 scale collectible figure Snake Eyes. Alas, why did Snake Eyes get the bloody drip red treatment? For those not in the know, the design of this piece is based on the 2020 IDW comic book series G.I. Joe: Deadgame. The art was done by comic book artist Rob Liefeld, who many know from his work at Marvel — he is most famous as the co-creator of Deadpool. Clearly, the man likes red characters. It makes you wonder whether or not Hasbro will follow suit and create some G.I. Joe Classified Series figures with the IDW G.I. Joe: Deadgame red repaint somewhere down the line. As for this specific figure, it is limited to 1,300 pieces in the United States and is sold exclusively at BigBadToyStore for $149.99. Snake Eyes stands 12 inches tall, is fully articulated, comes with extra hands, cloth clothing, and many accessories.

Ready for a real blast to the past that many people who played with toys as a kid likely hadn’t thought of for a hot minute? Enter Silverhawks! While Super7 teased the license earlier this year, fans of the classic franchise were not sure what the Ultimates figures would look like, or which characters the first wave would include. That problem is long gone — Super7 has revealed these creations, opened preorders, and spoiler… they’re breathtaking. I think the biggest gripe among fans might be that the paint is not chrome coated, which would have been a seriously great touch. The figures in the first wave include team leader Quicksilver, the intelligent and extremely strong Steelheart, and well as the villainous mob boss Mon*Star with his robot henchman Buzz-Saw! These cartoon-accurate, made-to-order, highly articulated, deluxe action figures stand 7 inches to a whopping 11 inches tall and feature a variety of interchangeable parts and signature accessories to accommodate all manners of intergalactic adventures! Order yours directly from Super7 today before the preorder window closes.

If you are a Mighty Morphin’ Power Rangers fan and Power Rangers Zeo fan, or just really like Catherine Sutherland playing Kat, the second pink ranger, then this is the box set for you! For only $41.99, this Power Rangers Lightning Collection action figure two-pack includes two Kat Hillard figures with premium painted details and designs inspired by her appearances as Mighty Morphin Pink and Zeo Pink. The Kat 2-pack even includes a small, white cat figure, inspired by Kat’s form under Rita’s spell. If that isn’t deep-dive fandom, I don’t know what is! It also includes her Power Bow, arrow, Blade Blaster, Zeonizer, Power Disc, blast effect piece and swappable heads. You can order your set today directly from Hasbro Pulse.

Now that we’ve covered this week’s exciting new releases from the big boys, I really want to focus on to some new independent releases. Toys, in addition to being playthings or nostalgic reminders from our childhood days, can also be pieces of art. Even if that art is, as we mentioned, inspired by our happiest days when we were children playing with our toys. And that is what’s happening with our next toy news highlights. We’re kicking off with Zombie Sailor’s highly anticipated Wrestling’s Heels and Faces toy line. Zombie Sailor (run by Josh Irizarry) is a well-known name in the toy collecting sphere — he is a seller and collector of vintage toys who has been featured on Netflix’s The Toys That Made Us and The Major Wrestling Figure Podcast.

The new line of figures, Wrestling’s Heels and Faces, is going up for preorder this Thursday, June 17, at 8 p.m. Eastern. Bookmark the official Zombie Sailor website, because you don’t want to miss it when sales go live today. The figures are limited to 2,500 pieces each and there are some impressive specs happening with this toy line. The original blueprints of each figure were designed by none other than former Hasbro designer Ron Rudat. Mr. Rudat designed tons of beloved and classic toy lines, but is (arguably) most famous for his work on the G.I. Joe and WWF Wrestling toy lines. Additionally, each figure was sculpted by artist Alex Heinke who has created award-winning toy sculpts for NECA.

Speaking of highly anticipated toys created by independent artists, we have to give some love to a toy line that made its way under our radar — Strike Force Alpha by Scorched Earth. Created by Matt LeCroy and Jason Schiermeyer, these toys are the result of what happens when custom toy tinkerers are too good at what they do! Strike Force Alpha is a love letter to the 3.75-inch o-ring toys of yesteryear and it is so wonderful to see these artistic fans and collectors get their turn to showcase their own creations. While their crowdfunding effort isn’t live yet (it is coming this summer), now is the perfect opportunity to follow Strike Force Alpha on social media and its official website. If your happiest memories include your old G.I. Joe toys, you will appreciate the original characters and artistry that went into this brand new lineup of characters.

We have reached the end, my toy-collecting friends, and we are featuring one more indie company here today. While the last item here is not exactly a new toy, it is a new product (literally, launching like now) that will preserve all of your carded toys new and old. Presenting MOC Masters' new UV Action Figure Protective Clam Shell. I am not even kidding when I say this is some of the most important toy news of the year. These products are so incredibly useful and will keep your toys sealed and preserved without any sun damage or card bending. MOC in the collecting world stands for Mint On Card, and the name of the company is simply musical. It is co-owned by Joe Teague, another massive toy collector with a sprawling Masters of the Universe collection. MOC Masters currently offers clamshells for 3.75-inch toys and 5.5-inch toys, but will soon be expanding to include more specific-sized items on card and in box. You can snag your own this summer via MOC Masters' official website.