Get ready, my fellow lovers of toys, because we are heading right back into that toy box for another week of newly announced toys and collectibles that are heading your way soon. Join me, your resident if not favorite toy journalist, while we collect all the righteously cool things we love, now in toy form.

Our assortment of toys, games, and collectibles for the week might seem like wild random pickings selected out of the sky — and to the untrained eye, one might wonder what they have in common. But to me, the answer is simple — it’s the art of play. There is something about all of these items in today’s column that harken back to those long, slow summer days where you wake up with the sun and spend the entire day eating popsicles, running through the sprinklers, and jumping from one game and toy to the next. Therefore, my toy collecting friends, we will kick off with some cut and dry toy news that is sure to give you THE POWER!

Quantum Mechanix (QMx) is one of my favorite manufacturers in the collectibles game. And just this week, the Q-Fig Diorama creator announced that they have successfully entered into an agreement with Mattel to bring fans new collectibles from Masters of the Universe. While QMx does have plush in its stock, the company will indeed kick off with Q-Fig Diorama statues for fans to enjoy. I’m personally hoping we see both their standard edition versions and premium dioramas like the amazing Avatar Aang one that was released not too long ago. But I think my mega-supreme MOTU wish list from QMx would be one statue with the Snake Mountain crew, and another with the Grayskull crew. That would indeed be a most advantageous journey.

When I was a kid, one of my favorite things to do during the summer was going to the movies endlessly. And when that new Ghostbusters: Afterlife movie trailer dropped this week, my heart grew three thousand sizes, filled with magic, and reminded me to believe in ghosts again. Perhaps Casper can get the 2021 treatment, too! Enter Hasbro with a phenomenal reveal at the exact same time the new movie trailer dropped — talk about a choreographed dance! Upcoming Ghostbusters products include a Mini-Puft Popper (which shoots out foam “marshmallows,” Nerf-style), a new edition of Clue (one of my favorite board games of all time), a new version of the Ghost Trap, a wave of Fight Feature Figures, which are 4-inch cartoony versions of the human characters that come paired with a ghost friend, and lastly — a new wave of Plasma Series figures. Ghostbusters Plasma Series is the Marvel Legends/G.I. Joe Classified/Star Wars Black Series/Power Rangers Lightning Collection flavor of collectible action figures from Hasbro. But what is especially fun here is that these figures have the new human characters from Afterlife in Ghostbusting gear, as well as older versions of our original Busters (Peter, Ray, and Winston) all back in their suits. Does this new Finn Wolfhard in a Ghostbusters suit conjure memories of his Halloween costume in Stranger Things? Indeed — it absolutely does. These new toys will be available this Fall everywhere toys and collectibles are sold. 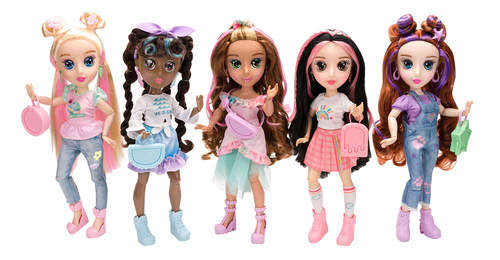 Staying on the topic of things you can play with mixed with companies I admire, let’s give some love to Jada Toys and see what they are up to. While the company was once most famous for its Hollywood Rides and small Diecast cars and Nano Figs, Jada has shown that they’re no one-trick pony. First, they announced the return of its action figure line with the acquisition of the Universal Monsters line. And now, Jada Toys is entering the doll market with B-Kind, a new line of eco-friendly dolls. The gimmick with these new dolls (which I just think are so adorable) is to promote children to be creative, kind, and compassionate. According to an official press release from Jada Toys, “the line features five, 12.25-inch dolls — Brianna, Koral, Ivy, Nora, and Daisy — all of which are eco-friendly, from the recycled materials with which they are made, to the eco-fashions they wear, to the reusable packaging created from ink made from soybeans.” I think the names being right on the nose (to spell out B-Kind) is smirk-worthy, but there’s something delightfully '90s about it. It reminds me of something that would be in a Sleepover Friends book or one of those similar serialized kids' books from my childhood. PUNS! The B-Kind dolls will make their debut online and on shelves exclusively at Walmart.

Iron Studios (the Brazilian company that makes awesome pop culture art statues) is showing off another statue reveal and honestly, it might be my absolute favorite one of theirs so far. Just like many of you, I excitedly watched The Mandalorian with complete devotion. While I enjoyed both seasons very much, I personally feel that season one was some of the best television I’ve ever seen in my life. For me, it was largely due to IG-11, the killer droid-turned-nanny-droid that stole every scene he was in. One of the most memorable parts of his story (save for the lava sacrifice which legitimately made me cry) was when he rescued The Child on his speeder bike while shooting down stormtroopers. Iron Studios has captured that moment in statue form and the teaser images are just so incredibly beautiful. This statue is hand-painted, stands nearly 8 inches high by 16 inches wide, and costs $319.99. It will be available in Q2 of 2022. Keep your eyes on IronStudios.com for preordering information, because you seriously don’t want to miss this one.

We’re nearing the end, my toy-loving friends, and we are wrapping this issue of Important Toy News with some love for games! Disney’s Jungle Cruise movie is hitting theaters this week and fans can relive the fun with Disney’s Jungle Cruise Adventure board game from Ravensburger. It costs $29.99 and is available for purchase from Amazon. “You’ve been hired to transport a boatload of cargo and passengers down the river to Jungle Navigation Company Headquarters," the game's official description promises. "There, company president Alberta Falls will appoint one family of passengers as temporary caretakers — and your new bosses — while she goes on a much-needed sabbatical. Be prepared to lose passengers and cargo to dangers hidden in the jungle, but don’t worry — you’ll find more along the way! Find clues along the river to see which family Alberta has chosen. Transport the most valuable boatload of cargo and passengers to Headquarters to win!” That’s a premise as deep as a film, and I’ll tell you that no game made by Ravensburger disappoints!

Remember earlier in the column when we were talking about serialized books from childhood? Move over Baby-Sitters Club, because Nancy Drew is back on the scene with Hunt a Killer’s Nancy Drew Mystery at Magnolia Gardens game. Is that one classy premise or what? You can purchase this one from Amazon as well for $29.99. In this game, Nancy Drew needs your help. Via Hunt a Killer’s press release, “When Nancy Drew begins to investigate a potential poisoning at the botanical garden known as Magnolia Gardens, she soon becomes poisoned herself. In the small window before her symptoms take hold, Nancy manages to collect all of the evidence the player will need, and to interview the potential suspects. Someone at Magnolia Gardens is using the facility’s dangerous plants for nefarious purposes, and Nancy needs your help to find out who before the culprit strikes again. To unearth the culprit, the player must figure out which suspect had the means, motive, and opportunity to commit the crime”. If this isn’t a kiss to cozy mysteries turn board games, I don’t know what is!

And the last game on our list is nothing new, but the most popular card game is getting an artsy facelift with UNO Artiste Series. UNO’s latest deck was created in collaboration with contemporary artist, activist, and illustrator Shepard Fairey who is known for the iconic images of Andre the Giant's face with the word "OBEY" underneath and the Barack Obama "Hope" poster. According to Mattel, the company will be making a donation on behalf of Fairey to the Ocean Conservancy, a nonprofit organization dedicated to protecting the oceans through federal and state legislation. The UNO Artiste Series: Shepard Fairey deck is available at creations.mattel.com for SRP $20.00.

Building a clone army: The science of 'Attack of the Clones'

Yasmine Finney cast as ‘Rose’ for 14th Doctor Who series

5 days ago
Your Horror Watchlist