Get ready for your nest egg to make its weekly wallet escape while you lurk closer to the newest goodies with me, your resident, if not favorite, Toy Journalist. Because this week, my toy collecting friends, there are some seriously cool (albeit somewhat premium) collectible releases on the horizon.

In 2020, Hasbro's Animatronic "The Child" from The Mandalorian was the hottest toy of the year. It was released around the holiday season and many of us lost our minds. Well now, freshly announced, is Hasbro's follow-up animatronic creation called The Galactic Snackin' Grogu. While it's cool that this toy is officially called "Grogu" instead of last year's "The Child," there's a lot happening here that might be hit and miss with fans.

First off, at $80, we're looking at dropping 20 bucks more than we did for last year's toy. And while the snacking gimmick is cute, this toy's face is... and his body proportions are... and just... liberties were taken, OK?

Toy collecting is subjective and every collector is welcome to live their best toy-collecting life. But this one here gives me thoughts, and it is mostly that if this is an aged-down toy for the "Baby Alive" crowd, this price point is unfair. As for the specs, the Galactic Snackin' Grogu animated toy comes with four interactive accessories (bowl with tentacles, cookie, shifter knob, and spoon). When they're placed in his hand, he will react with animations and sound effects. You can preorder him today directly from Hasbro Pulse.

The merchandising license for Avatar: The Last Airbender is expanding, and next on the list is Quantum Mechanix! QMX is most widely known for its Q-Fig miniature diorama figure toy, and Aang is getting the deluxe treatment with the new Max Elite diorama. QMX gives Avatar fans a visual spectacle as, via QMX, "the winds whip around Aang, lifting leaves and rocks high into the air. Perched high on a cliffside, Aang bends the whirlwind with his wooden staff while dressed in the traditional robes of the Air Nomads. And while Aang may be the last of his kind, he is certainly not alone — his loyal companion Momo soars and glides on the gusts high above him."

The Snyder Cut has been released, and Zack Snyder's Justice League is out in the world, which officially unleashes all the Black Suit Superman goods.

First up, Iron Studios presents its "Superman Black Suit Art Scale 1/10 Statue. Per Iron Studios, the figure shows the "greatest hero wearing the iconic black and silver uniform, just as it should be on his triumphant return, to join forces with the other heroes in the creation of the Justice League, to prevent the destruction of Earth by the invading forces of the intergalactic tyrant Darkseid, under the command of his general Steppenwolf and his legion of Parademons."

The statue depicts Superman, as played by Henry Cavill, in a triumphant pose ready for action. It costs $149.99, ships Q4 2021, and is available for preorder via Iron Studios. 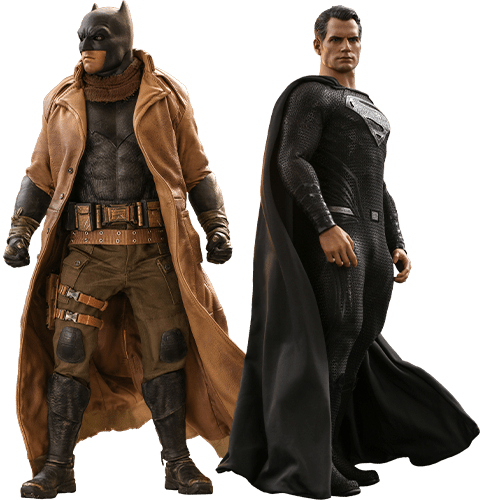 Let's take a peek at the next one in line! In celebration of the highly anticipated Zack Snyder's Justice League, Sideshow and Hot Toys are giving us Knightmare Batman and Superman Sixth-Scale Collectible Set from this special director's cut.

Not to be outdone, the exceptional Superman collectible figure is meticulously crafted based on his movie likeness featuring a LED light-up head sculpt that accentuates Superman's heat vision ability, an interchangeable head sculpt, muscular body with high possibility, a newly tailored black suit with Superman logo in metallic silver-gray, and a themed figure stand.

Knightmare Batman and Superman Sixth Scale Collectible Figure Set from Hot Toys costs $515 and will ship Summer 2022. They are available for preorder today from Sideshow Collectibles.

Well blow him down because he's strong to the finish getting down on that spinach. Popeye and his nautical crew are joining Mezco Toyz's 5 Points family — complete with character-specific accessories and a playset designed after Rough House's Cafe!

This titanic boxed set features Popeye, Olive Oyl, Bluto, Rough House, and a playset — talk about a whale of a time! Once assembled, Rough House's Cafe features all the familiar details as seen in the nostalgic comic strips. The 5 Points Popeye Deluxe Boxed Set costs $49.99 and is available for preorder directly from Mezco Toyz.

We've reached the end, my toy-loving friends, and we're going to wrap this issue of Important Toy News by celebrating Mondo's new version of The King of the Monsters.

And at last, you can have your very own premium statue of the King, accurately detailed in every way to resemble the real-life radioactive reptilian wrecker, as seen in the 1989 film Godzilla vs. Biollante. Sculpted by Mondo artists Mark Newman and Hector Arce, designed by Eric Siebenaler, and painted by Hector Arce, the Godzilla '89 Premium Scale Statue comes with a switch-out mouth (open or closed). Also available, as supplies last, is the limited-edition version, which, according to Mondo, comes with the aforementioned switch-out mouth, as well as a switch-out Heat Ray and a battle-damaged arm, wounds inflicted by vicious vegetable Biollante!

Jon Kasdan and the 'Willow' cast explain the premiere

'The Mean One' trailer unleashes a gruesome new Grinch