Get ready, my fellow lover of toys, because we are heading right back into that toy box for another week of newly announced toys and collectibles that are heading your way soon. Join me, your resident if not favorite Toy Journalist, while we collect all of the video game things we love in toy form. We have some really good gaming treasures hidden inside that toy box this week, plus a couple of non-gaming goodies. Let's start by going back to the past.

We've looked at Youtooz collectible vinyl figures before here on SYFY WIRE and have given them a cool pat on the back for being the only company to lean into memes, streamers, and other "so quirky influencers." I'll speak for myself as a person who was once young and now is less than young — many of today's online personalities leave me shrugging. But not this time — welcome the Angry Video Game Nerd, The Collectible Vinyl Figure. AVGN pre-dates YouTube, as many of us know this snarky-voiced gentleman from his first video back in 2004 where he ripped apart an old game. Personally, I've been watching since 2006, back when I was in the computer lab in college pretending to research things when instead I scoped AVGN videos and read questionable fan fiction. I love James Rolfe and AVGN and I can't wait to own this figure.

The new AVGN vinyl collectible from Youtooz will likely cost about $30. Preorders for this toy open tomorrow, on June 11, and it will ship between October 8 and 15 of this year. You can bookmark the product page here — and you should if you want one, as seriously Youtooz always sells out and certain toys are worth tons on the secondary market. As for its specs, the figure stands 4.8 inches tall and shows AVGN holding a gun and wearing a cape. He wears, according to Youtooz, "a futuristic headset, and an angry expression. His white dress shirt is untucked, and brown slacks are wrinkled over top black and white sneakers. The double-walled window box is illustrated to show Angry Video Game Nerd's home on fire." 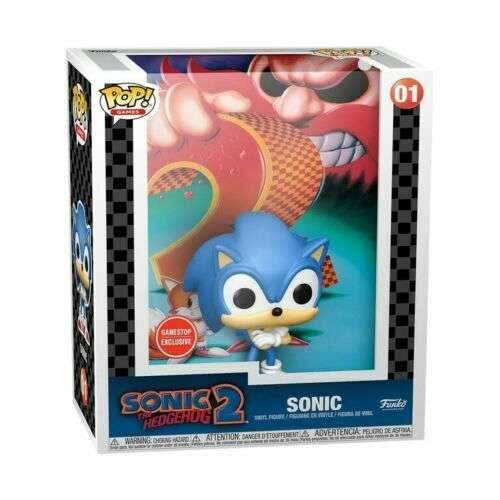 Next up in our highlight reel of video game-inspired toys is the new GameStop Exclusive Funko Pop Game Covers Sonic the Hedgehog 2 set! Funko has announced a new series of toys/packaging and they are calling it Game Covers. It means that your 3.75-inch Pop! vinyl figure comes in commemorative packaging with the video game's original box cover in the background. Note that fancy "01" in the top corner, meaning there will likely be more of these to come. As some people know, Sonic the Hedgehog 2 holds a very special place in my heart and on my arm, where I have a Silver Sonic Robot tattoo, so I'm obviously gushing about this new release. Hopefully, there are many more unique throwback game covers/toy combos to come. POP! Game Cover: Sonic the Hedgehog 2 GameStop Exclusive costs $14.99, ships late June 2021, and is available for preorder today.

Last weekend in an official press release, Todd McFarlane himself let loose some very exciting news — McFarlane Toys has the Avatar: The Last Airbender license and would be releasing some new action figures soon. From what we can see in this new teaser image, the first wave (I hope first wave at least, so we can have many more characters!) fans will be treated to the Season 1 versions of Aang, Katara, Sokka, Zuko, and in a surprise reveal, Appa! YIP FLIPPIN' YIP!

I personally think that these figures, based solely on these teaser images, look awesome. I'm just such an Avatar action figure addict — when The Loyal Subjects announced its own Avatar Aang in its BST AXN line, it was an instant preorder for me. MEGO started showing off its own Avatar Aang figure, and as we remember from the sneak peek glimpse that QMx treated us to a few weeks back, they have their own amazing Avatar Q-Fig dioramas on the way. And other than the original figures that Mattel released when Avatar: The Last Airbender was fresh on TV, the only company in the last two years actively making any toys from one of the most amazing television shows in history has been Diamond Select Toys, which I have been collecting since they showed up in stores. But as history has shown us, few companies pump out the plastic like McFarlane Toys. They have been in this collectibles game since the '90s and their work is only getting better since their acquisition of the DC toy line. To sum it up, once these hit the stores, I will apparently have more Avatar figures via McFarlane taking up my shelves. Because from what I am seeing here, these Avatar figures are just too pretty.

Who's been pulling every evil string? It's been Agatha all along! Yes, Loki may be the current MCU series, but let's give WandaVision its final send-off because golly, wasn't it so much fun to watch?! And didn't we all love the Agatha part? Be the witchiest witch that ever witched in the Marvel Cinematic Universe and celebrate your Agatha Harkness fandom with some really nice looking jewelry and pins. These are Entertainment Earth exclusives, and they are just as beautiful as the WandaVision wedding ring prop set that came out shortly after the show's debut. Check out these new goodies and add them to your fandom jewelry collection (which I imagine we all have) today!

It's a fan thing
Join SYFY Insider to get access to exclusive videos and interviews, breaking news, sweepstakes, and more!
Sign Up for Free
All Posts About
Features
Games
Action Figures
Avatar: The Last Airbender
Collectibles
Important Toy News
Sonic the Hedgehog
WandaVision
toys
You May Also Like
Recommended by Zergnet
Latest on SYFY WIRE

Microrobots seek out and destroy bacteria in the lungs

Dogs can smell stress through our sweat and breath