Important Toy News: This $1000 Batmobile is the best Batmobile

Welcome back to Important Toy News, the SYFY WIRE column that takes you on a magical adventure through the alluring land of toy collecting. All right, all right, it's really a sickness, but it's exciting and my shelves look pretty. My spirit is strong, my wallet is shaking in fear, but we're going to find a middle ground because toys are amazing and so are the people who collect them!

This week, I thought we'd shake up the format and have a little fun. Instead of a streamlined discussion of the newest toys on the market, I thought a countdown of 10 of the best toys of the week (with absolutely nothing in common) would make for a ravishing experience! Are you ready to play? Let's rock!

Coming in first is a $1000 Batmobile from Iron Studios. Iron Studios and Sideshow Collectibles are giving us Christmas in July. That is, July 2020 in the form of this magnificent 1989 Batman and Batmobile statue. Not only do we get Batman in the Batcave, but he's standing beside his Batmobile. That is, the best Batmobile ever. I will totally fight you on that; try me.

This is superb — even the buttons in the dash are accurate. I checked. It is a bit on the high-priced side, tipping the wallet at $1000, but at this scale (and weighing in at 43 lbs.) this thing is huge and you literally need a Batcave to hold it.

Next up in amazing toys of the week is a spectacular piece by Enesco, LLC. It's called Grand Jester Jack as the Pumpkin King, and it's a Nightmare Before Christmas toy (just in time for pre-Halloween!). Jack Skellington, aka the Pumpkin King, stands aglow with clear resin fire flames on top of his trojan horse as he makes his way through Halloweentown. A true boss.

This oversized sculpture is frightfully delightful. Pumpkin King Jack stands nearly 18 inches tall, features clear resin flames, and has an MSRP of $74.99. He is available for preorder today.

It's time to get radical, my friends, because GameStop is giving us a treat! Gamestop has announced a classics Teenage Mutant Ninja Turtles four-pack, which will retail at $39.99; pre-orders are open now.

The classic 1988 figures we all love are represented in this new box set celebrating 35 years of turtles. Its style is much like the Walmart set earlier this year, and so I seriously love this classic set, too. I can't help but wonder if Playmates just reused those old '80s molds, because these figures look just like the radical toys we saw up and down the KayBee Toys aisle back in the day. If you factor in inflation, they're about the right price, if not cheaper than what you paid back then, too. I feel like in the late '80s Ninja Turtle toys cost about $4.99 each, and now GameStop is giving us this box set for $39.99. $10 per turtle.

You got a "buy the thing" justification math lesson from a toy journalist — you're welcome.

Up next, Funko is showing off its newest wave of Ad Icons Pops, and they're all pretty super charming. The last wave of them included the Jollibee Bee, Kool-Aid Man, cereal mascots, and more. But today Funko is unveiling some classic commercial and snack buddies that are bound to kick you right in the nostalgia button.

The new wave will include Chester Cheetah (want), the Energizer Bunny (want), the Coca-Cola Polar Bear, and some Pez dudes. But the set that I will ravage shelves to get is the 12-pack of mystery minis. I need that Tootsie Roll Owl, the mini Kool-Aid, Bob's Big Boy, and Chocula, because snack life is best life. The set has an MSRP of $69.99 and is available for preorder now.

Can you smell what new series Kidrobot has been cookin'? It's time for WWE! Welcoming your favorite WWE characters like John Cena, the Rock, the Undertaker, and Ronda Rousey into the ring, the Kidrobot x WWE Vinyl Mini Figure Series is here to body-slam a new look to your vinyl toy collection.

This collectible mini figure series is a must-have for all wrestling fans and is available for purchase now. Each 3-inch-tall figure is individually packaged in a sealed foil bag and blind box to add mystery and delight with each unboxing. Each figure is a mystery even to us, so chase down the whole collection of 14 characters today at Kidrobot.com to prove you're the ultimate WWE fan. 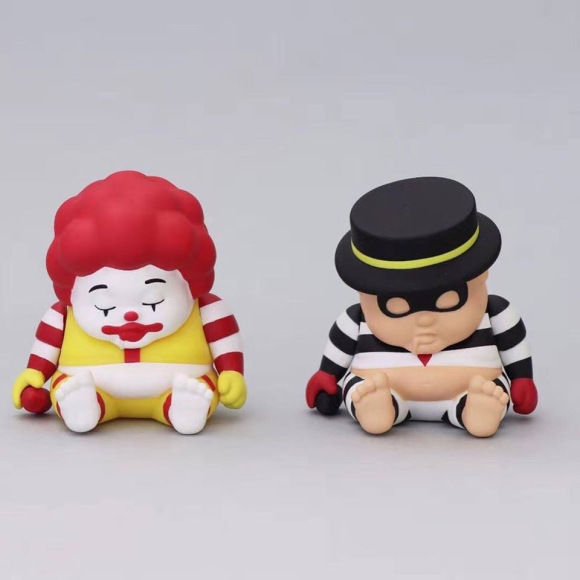 Coming soon with an MSRP of $52 is the most adorable set of stinky, sleepy, chunky toys these crazy eyes have ever seen. They're called the "Small Fries" and "Thief" Special Edition set. These toys are made of painted vinyl and will be available for preorder RIGHT HERE on Saturday, September 7. These are guaranteed to go quickly because they're just so damn cute!

Unbox Industries had a larger version previously, but if toy collecting has taught us anything, it's that people like them little!

More toys, you say? Why thank you, I would love to flash you more treats. Wait a second — that could be misconstrued. But whatever, we're collecting toys!

So, Geek X is an emerging Australian toy company that hit my radar not too long ago. And now I will never let them leave, because they're showing off a brand-new statue and the creativity and artistry of it seriously have my jaw dropped. Look at this beautiful creation! Everything about it is working for me. Yes, it is a prototype, but it's an amazing one. I love the posing of everything here, from the Joker to Batman and Robin. Look how Joker turned Robin against Batman — Batty is about to get a pole through the head!

While we don't have a release date, preorder information, or a price point yet, we can admire the majesty of this statue until Geek X is ready to give us a little more information. 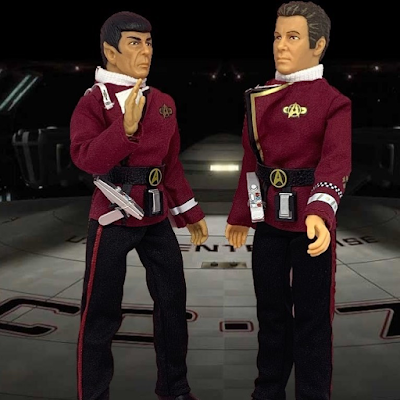 Fans of Important Toy News might remember when we here at SYFY WIRE interviewed Mego Corp owner Marty Abrams, the Father of the Modern Action Figure. Well, now we get to see exactly what Mego has been hard at work on. Because the company is taking Star Trek figures where they've never gone before, outside of The Original Series and right into The Wrath of Khan.

The three figures so far are Admiral Kirk, Captain Spock, and, of course, Khan Noonien Singh. Not only are we getting more and more MEGO in Target stores, but new Star Trek movie figures! If you can't wait to see them at retail, you can order them from BigBadToyStore today. 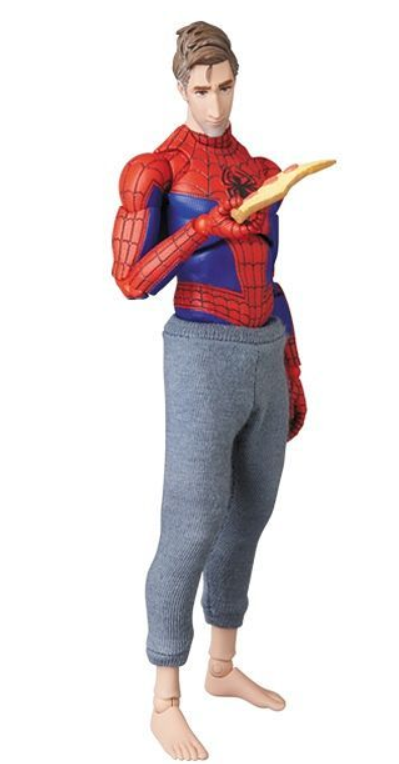 We're nearing the end, my toy-collecting friends, but we still have two more in our super random toy news selection of the week.

Coming in next, we have a breathtaking (and hilarious) Peter B. Parker of Spider-Man: Into the Spider-Verse fame action figure from Medicom Toy in its MAFEX line. He features four replaceable heads parts to depict a wide range of emotion and comes with tons of accessories, including his mug, a slice of pizza, unworn mask, and more. His coat and sweatpants are made from real fabric, too!

With excellent detail and incredible articulation for posing, this is a collectible that Spider-Man fans won't want to miss! You can preorder him from HobbyLink Japan today for $77. 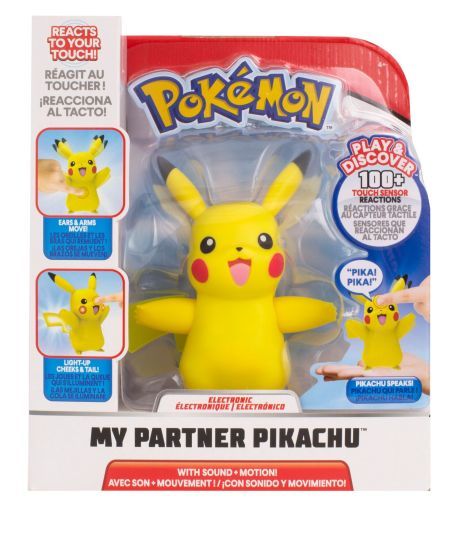 And the final destination on our toy journey today is ironically the most affordable one. Hey, after starting off with $1000 of fun, I figured ending on a $17 note was only fair.

New from Wicked Cool Toys is My Partner Pikachu, and what he claims to accomplish is a tall order. This new Pikachu is an all-new, fully interactive Pokémon toy that lets you engage with Pikachu like (apparently) never before. My Partner Pikachu uses touch sensor technology to bring Pikachu to life and enable anyone to become a Pokémon Trainer in the real world.

Based on your touch, watch Pikachu's arms and ears move, his cheeks and tail light up, or hear one of his iconic Pikachu expressions or sound effects. Man, I hope he's secretly sentient and he records me. No! Even better, I hope he's like the Krusty the Clown murder doll. And if so, if this Pikachu is truly alive and seriously interactive ... I'll just hope that he won't try to kill me and the toaster is finally done laughing at me.