So, keep those bras and pants optional, get ready to shop (online, due to the coronavirus, of course), and get ready to dive into that virtual toy box with your resident, if not favorite, Toy Journalist.

Because today, my locked-up lovelies, we are focusing on video game toys! And honestly, what a week for games from video game franchises — the ones we have to show you are plentiful, beautiful, and … polygonal?

Retro video game fans have plenty of warm and fuzzy feelings (rightfully so) for all those bits and pixels. When you think of a game from the Nintendo/SNES/Genesis era, your mind automatically goes to that pixel art aesthetic, right?

But time is moving forward, and so is game technology, which is why we are so incredibly in love with these Final Fantasy VII polygon toys from Square Enix!

Right now at Entertainment Earth, you can order an eight-pack of these figures (randomly packed, blind-box style) for about $64. They each stand about 2 inches tall and seriously look like they’ve been transported right out of the original FFVII game. (Whether it was PC or PlayStation, that’s your poison to drink.)

The display may include Cloud, Barret, Tifa, Aerith, Reno, Sephiroth, and Red XIII. No matter what figure you get, it will be a great, fun addition to any classic Final Fantasy VII collection! Each blind box contains one of eight different designs, with a chance it could be the special "Chaser" figure.

From Final Fantasy to our favorite fantasy hero, Medicom is unleashing three amazing Link figures from The Legend of Zelda.

One of the greatest things about Link (and the whole Zelda franchise, really) is that each game looks so stunningly different. These three figures fall under the UDF line (Ultra Detailed Figures), are made of vinyl, and are about 3-3.5 inches tall. They will ship November 2020, and you can pick from Link from 2017’s Breath of the Wild, Link from 1998’s Ocarina of Time for the N64, and Link from The Legend of Zelda: The Minish Cap.

Each of these figures costs $14.99 and can be preordered today.

Next, we have a new reveal from Japanese toymaker Sentinel.

The full official name for this toy is the Mega Man Riobot Mega Man X (Falcon Armor Ver.) PX Previews Exclusive. And before you scoff at the $155 price tag, let me just say that the quality of a Sentinel toy is just spectacular and every penny is 100 percent justified.

Standing over 6 inches tall, Mega Man X is based on the art of Eiichi Shimizu and features many built-in mechanisms to allow for the wide range of motion and stiffness in the joints to hold those poses! The Megabuster even comes with an LED light inside "to give the feeling that it's charging up power," according to the official description from Sentinel.

This amazing Mega Man X action figure is due out September 2020 and can be preordered today.

A SUPERVILLAIN WITH A SMILE

Sometimes during Important Toy News, we have a segment called Superhero Toys. But today we are focusing on video games, right? Let’s be rebel scum and mix the two together!

It’s Batman and the Joker from the awesome video game Batman: Arkham Asylum, brand new from McFarlane Toys. While some people were a little worried or curious or a combination of both when McFarlane got the DC toy license early last year, I've been completely blown away and impressed by what the company is showing off.

And, in my opinion, these two pieces are incredibly well sculpted and filled with details that most figures are missing. As for accessories, they are not bad for a $20 price point. I always thought this video game line needed more love, so to see it now is fantastic.

These figures are already popping up in some Walmart stores, so keep your eyes open for them during your next essentials run.

Also in the realm of video game toys from McFarlane — let’s talk about DOOM!

DOOM Eternal just came out a few days ago, and a new plastic figure has come out with it. The Phobos pattern variant armor colors and the DOOM Marauder are the newest action figures from this franchise.

While the DOOM Marauder is a new creature in the game, the Phobos variant is just a color swap, much like the Walgreens Bronze version that came out last year, so nothing new there but paint. Both are due out in May, and the classic colors are available now.

They will retail for $19.99, and you can preorder them today from BigBadToyStore. 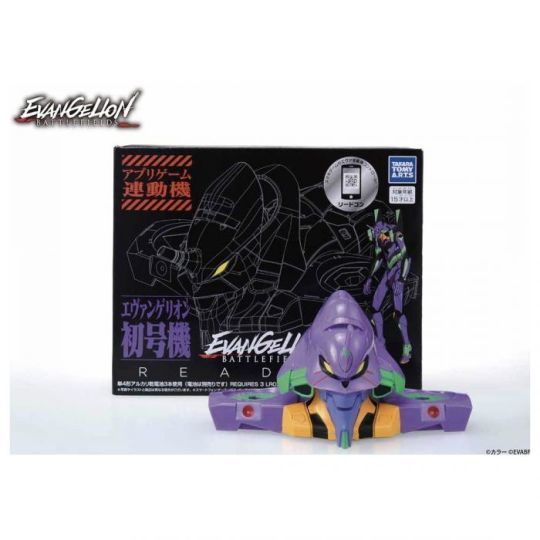 Let's get so modern it hurts and talk about a mobile phone game because that's what the young scamps and whippersnappers do.

You see, deep in the magical world of Japan, a phone game called Evangelion Battlefields exists. Upon seeing this awesome listing for an Evangelion head controller by Takara Tomy, I learned that these cool Amiibo-style toys (sold separately) also exist!

I’m unsure if an English version of Evangelion Battlefields will be available, but either way, this controller is badass-awesome. Use it as a coaster, it doesn't matter. It's just incredible. You can pick one up for $40 and it will ship this month.

THE RIGHT SONIC (FROM A CERTAIN POINT OF VIEW)

We've reached the end, my quarantined friends, but we can’t go without talking about the last time we saw a movie in the theaters and liked it.

OK, maybe you saw Onward, but I didn't, so we're going to talk about the romantic Valentine’s Day classic Sonic the Hedgehog instead.

We discussed not too long ago how there are still toys for sale featuring that hideous design (three to be exact), but now you can buy a really nice statue featuring the movie Sonic we love from Diamond Select Toys. This highly detailed Sonic statue is about to take off in a burst of speed, lightning crackling around him. Standing about 5 inches tall, this Sonic statue is ready to speed into your collection!

I personally think this rendition is fantastic and will fit in really nicely with Sonic fans’ other statues and figures of the speedy blue hedgehog. Sonic costs $64.99, will ship in August 2020, and is available for preorder now.

It's a fan thing
Join SYFY Insider to get access to exclusive videos and interviews, breaking news, sweepstakes, and more!
Sign Up for Free
All Posts About
Features
Games
Action Figures
Collectibles
Final Fantasy VII
Important Toy News
Sonic the Hedgehog
doom
toys
video games
You May Also Like
Recommended by Zergnet
Latest on SYFY WIRE