In writing, there is a term called "a hat on a hat." What that means is putting too many things unnecessarily on top of each other, thus diminishing the effects of whatever those things might be. Andrew Lloyd Webber's Starlight Express is essentially 72 hats stacked up wearing a trenchcoat.

You may be familiar with Webber's utterly bananapants bonkers musical merely as the one where the actors are all on roller skates. I must inform you, that detail is frankly the least ridiculous element of this show.

Back in 1974, Webber had an idea, and that idea was to create an animated series based on the popular children's novels Thomas the Tank Engine. His efforts were unsuccessful, though the television series would famously come to fruition in the mid-'80s and also perfectly describe the musical that it inspired: 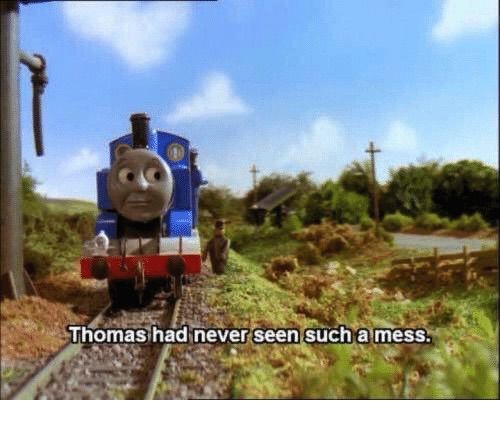 Because the man apparently loves trains like Jon Peters loves metal spiders, Webber went back to the well and penned a novelty song for singer Earl Jordan titled "Engine of Love." The song featured lyrics like "'Cause you’re my Engine of Love // Thrill me with your motion // And I’ll follow you // Your track can be mine." Lesser men would seek out Men In Black technology to make people forget all about this monstrosity, but not our Sir Andy. Heavens no.

This next bit I am going to quote directly from Wikipedia, per the program note from Webber himself in the original West End production:

Around the same time as writing "Engine of Love," an American TV station invited Lloyd Webber to compose songs for an animated film of Cinderella. In this version of the story, the Prince would hold a competition to decide which engine would pull the royal train across the United States of America. Cinderella would be a steam engine and the ugly sisters would be a diesel engine and an electric engine. The project went into development hell, but Lloyd Webber remained interested in the idea of telling a story with trains.

Y'all. What is happening. What is any of this. What is with THE TRAINS?

Like a holy trinity of WTF, Webber turned these three individually odd things into the most buckwild thing to ever be an actual Broadway smash and that is saying something considering his most famous show is about cats introducing themselves and then electing some manner of ghost president? Honestly I'm still not sure what Cats is about.

I'm going to attempt to describe this as clearly as I can. Starlight Express is similar to Cats in that many of the songs are characters just telling you their whole entire deal. Sort of. The show has cycled through so many musical numbers it's difficult to parse. Essentially, its entire 35-year existence has been one very long workshop. All of the characters are trains. Except for the little boy voiceover who is imagining and/or dreaming the whole show. It's some St. Elsewhere sh*t. His dreams follow these bonkers singing trains, most notably Rusty, our hero I guess, who is a steam engine and looked down upon by the other fancier trains.

There is also some intra-train fighting about what's the superior train cargo: stuff or people. The lyrics of this number include repetition of "Freight! Is great!" a million times until you yourself become a roller skate. The trains all race each other. Rusty is trying to be the best train at racing. He's trying to be a very good racing train. He is in love with Pearl, who is an observation car and wants to find a man-train, as she tells us in a song called "He'll Whistle at Me" which has lyrics like "And then he'll whistle at me // He'll send a note and woo me // He'll whistle at me // I'm gonna hitch him to me." If you think the book of this show isn't entirely populated with train puns, I don't know what to tell you.

Rusty prays to his train-god, the Starlight Express, that he can be a very good racer boy and win the race. I don't understand why the trains need to race. They have deliveries to make of people and items. But it doesn't matter because it's all the pretend machinations of a small child who has limited understanding of the freight industry.

But here's the thing. You guys. HERE IS THE THING: the Starlight Express was Rusty the whole time. IT WAS IN HIS HEART ALL ALONG.

So. To sum up. There is a train-god who is Rusty all along who was also a child's dream all along. Hats on hats on rollerskates on hats.

There's also a love triangle, a train-divorce, concerns regarding the rules and regulations of imaginary train races, and, of course, a rap.

Also, at one point, Jane Krakowski in her Broadway debut.

God, I haven't even gotten into the costumes yet, have I?

They are ... weird. Like mixed-media steampunk robots from the future with rollerblading gear but also very Return to Oz mixed with Alpha 5 from Power Rangers. I don't ... I don't know what else to tell you.

Upon its release it was the most expensive show ever to be staged on London's West End, with a budget of $3.08 million (adjusted for inflation, that's around $7.6 million in today's money). By the time Starlight made its way to Broadway, the figure was $8 million (over $19.7 million). But money can't buy good press. In his New York Times review, Frank Rich wrote the following:

In a full-page program note, the composer Andrew Lloyd Webber modestly explains that he conceived his new musical, Starlight Express, as an entertainment "event" for children who love trains. Over two numbing hours later, you may find yourself wondering exactly whose children he has in mind. A confusing jamboree of piercing noise, routine roller-skating, misogyny and Orwellian special effects, Starlight Express is the perfect gift for the kid who has everything except parents.

And the years have gotten no kinder. When it briefly stinted in Chicago in 2003, Michael Phillips wrote in the Chicago Tribune, "If musicals could vote for 'World's Dopiest Musical,' even Starlight Express might vote for Starlight Express."

Like Cats, Starlight Express has gone on to exist as mostly punchline. But a very, very popular punchline because there is no accounting for taste or roller-skate love. In news that will shock no one, it is the most successful musical in Germany, where they literally built a permanent structure dedicated to it and only it. Its West End production remains the eighth-longest-running musical in Broadway history. It spawned a permanent Las Vegas residency (PUT BRITNEY SPEARS ON ROLLER SKATES, YOU COWARDS) that lasted four years, as well as multiple touring productions, and at least one version on goddamn ice.

Starlight Express is weird, bad, dumb, silly, and weird. But at least they haven't made it a movie with Idris Elba.

Oh god, no, what have I put into the universe?