In Netflix's newly-released anime version of Ultraman, newly-minted Ultraman Shinjiro Hayata has a big problem: he doesn't want to kill monsters. It's hard to blame him, though: the monsters he faces aren't the traditional evil kaiju confronted by his predecessors — they're man-sized, intelligent, and most often hiding away in Tokyo's Alien City just trying to get by. Many of them plead for their lives before they're dispatched, which can give any power-armored protagonist pause.

It's a novel approach to the long-running Japanese tokusatsu series, which has existed in one form or another since 1965. In the old days, episodes followed a strict formula: giant monster shows up; our hero turns into Ultraman and grows big; and suplexes said beastie into oblivion.

While the new Ultraman takes a more unconventional approach, humanizing the creatures and turning the battles into gory street fights with powered armor, there's nothing quite like sitting down and watching two men in rubber outfits just go to town on each other. Either way, the new Ultraman has us in the mood to revisit some of the show's most interesting, important, and just plain weird kaiju in the series' history.​

The new Ultraman's Big Bad shares a name with the first monster the classic Ultraman ever faced — a stout, Godzilla-looking creature with teensy T-Rex arms and asymmetrical eyes that make him look positively deranged. Fun fact: Bemular's roar is just the classic Godzilla roar, thrown in reverse and modified a bit. Given the legacy of the kaiju series, it's absolutely fitting that Ultraman would start his career beating up a dime-store Godzilla.

The finale of the original Ultraman series (the last episode that remains in-continuity in the new show) saw Ultraman face off against Zetton, a beetle-like kaiju with arms and legs sticking out from a thick, black carapace. He's one of the most powerful monsters in the Ultraman universe – he even defeated Ultraman before being nerfed by the other members of the Science Patrol.

While Zetton was defeated, his species lives on in the new series in the form of SSSP member Edo, a member of the Zetton race who chooses to work with humankind to defend Earth. 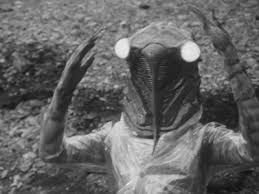 The new Ultraman gets his first real test in the new show courtesy of a malicious, bug-like creature named Adacic, who is heavily based on this monster from the Ultraman-less first season in the Ultra series, Ultra Q. One of a race of insectoid aliens, Cicada Man disguises himself as a human to steal a fallen meteor and control a pair of other aliens arriving on the planet.

While the Cicadas aren't kaiju per se, their uncanny mixture of slender human bodies and tall, insectoid heads make for some of the Ultra series' most curious images.

Another old villain to crop up in the new show is the manipulative Star Cluster Alliance Agent Adad, heavily based on this old Ultraman baddie. Aptly named after the absurdist art movement, Dadas were alien humanoids with bodies striped white and black in geometric shapes, with a large blank face that could change itself into three different moves. Funnily enough, the Dadas became so iconic that they've been associated with Dadaism (a pointedly nonsensical historical art movement) in Japanese culture ever since.

The primary baddie from Ultraman Ace, Yapool has been reimagined into Bemular's chief scientist and caretaker to that show's version of Ultraman Ace, an alien driven by a complicated relationship with the humans he cares for. But in his original form, Yapool was much less complicated; a red, spiky insectoid creature, his never-ending hatred of the Ultras keeps him alive time and time again. He's basically the Ultra Series' Satan, an ancient monster from another dimension with the ability to create other monsters called Choju.

It's the monster that proves that the Ultra series and the Exorcist franchise exist in the same universe! While this Pazuzu has little in common with the demon that made Linda Blair shout profanities and vomit pea soup at people, his horned design and thick thighs make the bull-themed kaiju a formidable villain. After he was defeated by Ultraman Gaia, Pazuzu absorbed the energy from a wormhole and revived himself as "Super Pazuzu," something Father Merrin should thank the Lord he never had to deal with.

Looking like a genetic cross between Godzilla and a corn cob, the Red King menaced the remote Tatara Island as its undisputed king – that is, until Ultraman arrived and paralyzed him early in his series. The Red King would crop up again in various incarnations both in Ultraman and its subsequent series and is one of the most iconic and popular kaiju in the Ultra series.

The first kaiju to last more than one fight against Ultraman, Gomora has a surprisingly complicated role in the Ultra series. More than just a true villain, Gomora even got a chance to become a hero in the Ultraman-less spinoff Ultra Galaxy, as one of a few good monsters under the guidance of master monster tamer Rei. Still, with his patented battle strategy of ramming a monster's guts with his sharp horn and firing his energy beam directing into the wound, Gomora's a kaiju not to be trifled with.

Imagine that Earth's ionosphere was home to a race of mysterious creatures and one day they just decided to swoop down and destroy us all! That's the premise behind Gazort's species (who are literally called Critters), Gazort himself morphing into a terrifying clawed monster thanks to some rather unhelpful radiation exposure. Fun fact: the "roars" of the Critters? They’re the modified sounds of a laughing baby. Creepy.

Okay, we just have to finish up with one of the more bizarre kaiju in the Ultraman series — the creatively-named Dinozaur, who was eventually defeated by the newly-minted Ultraman Mebius by blowing Dinozaur's head clean off. Unfortunately, when that happens to Dinozaurs, apparently all they have to do is stand on their hands and grow two more heads out of its butt. It's called a Dinozaur Reverse — look it up.

It's a fan thing
Join SYFY Insider to get access to exclusive videos and interviews, breaking news, sweepstakes, and more!
Sign Up for Free
All Posts About
Features
TV
Kaiju
lists
rankings
ultraman
Related Stories